Joan of England, Queen of Sicily

Joan of England (October 1165 – 4 September 1199) was the seventh child of Henry II, King of England and his queen consort, Eleanor of Aquitaine.[2]

Joan was born at Château d'Angers in Anjou, and spent her youth at her mother's courts at Winchester and Poitiers. In 1176, William II of Sicily sent ambassadors to the English court to ask for Joan's hand in marriage.[3] The betrothal was confirmed on 20 May and on 27 August Joan set sail for Sicily, escorted by John of Oxford, the bishop of Norwich and her uncle, Hamelin de Warenne, Earl of Surrey. In Saint Gilles, her entourage was met by representatives of the Kingdom of Sicily: Alfano, Archbishop of Capua, and Richard Palmer, Bishop of Syracuse. 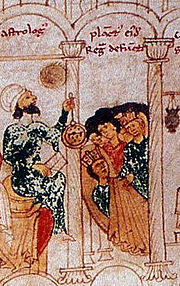 After a hazardous voyage, Joan arrived safely, and on 13 February 1177, she married William II of Sicily and was crowned Queen of Sicily at Palermo Cathedral.[4] Joan produced no surviving heir, although there were rumours that she had given birth to a boy called Bohemond. When William II died in November 1189 he was succeeded by his bastard cousin Tancred, who seized the lands given to her by William with the sound strategic reason that Monte Sant'Angelo lay on the route taken by the invading forces of Heinrich VI of Germany.[1]

Finally, her brother Richard I, King of England arrived in Italy in 1190, on the way to the Holy Land. He demanded her return, along with every penny of her dowry. When Tancred balked at these demands, Richard seized a monastery and the castle of La Bagnara. He decided to spend the winter in Italy and attacked and subdued the city of Messina, Sicily.[5] Finally, Tancred agreed to the terms and sent Joan's dowry. In March 1191 Eleanor of Aquitaine arrived in Messina with Richard's bride, Berengaria of Navarre.

Eleanor returned to England, leaving Berengaria in Joan's care. Richard decided to postpone his wedding, put his sister and bride on a ship, and set sail. Two days later the fleet was hit by a fierce storm, destroying several ships and blowing Joan and Berengaria's ship off course. Richard landed safely in Crete, but they were stranded near Cyprus. The self-appointed despot of Cyprus, Isaac Comnenus was about to capture them when Richard's fleet suddenly appeared. The princesses were saved, but the despot made off with Richard's treasure. Richard pursued and captured Isaac, threw him into a dungeon, married Berengaria on 12 May 1191 at Limasol, Cyprus and then sent Joan and Berengaria on to Acre.

Joan was Richard's favourite sister, but he was not above using her as a bargaining chip in his political schemes. He even suggested marrying her to Saladin's brother, Al-Adil, and making them joint rulers of Jerusalem. Although Al-Adil and Saladin both expressed agreement with the arrangement, the plan failed when the high ranking priests opposed the wedding and threatened Richard that he would be excommunicated from the Christian Church. King Philip II of France also expressed some interest in marrying her, but this scheme, too, failed (possibly on grounds of affinity, since Philip's father Louis VII had formerly been married to her mother).

A double seal of Joan's. 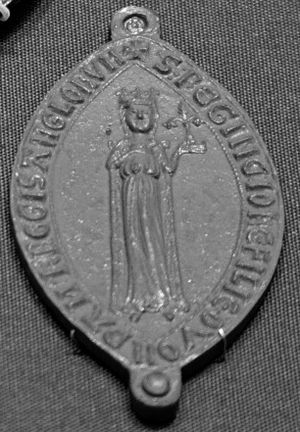 Joan was married in October 1196, at Rouen, as his third wife, to Raymond VI, Count of Toulouse, with Quercy and the Agenais as her dowry. She was the mother of his successor Raymond VII of Toulouse (born July 1197), and a daughter, Joan (born 1198), who married Bernard II de la Tour, Lord of la Tour.

Some chroniclers, who disliked Raymond VI, Count of Toulouse (believing he was a heretic), claim that his marriage to Joan quickly became unhappy, and that she had been fleeing to her brother Richard's domains in 1199, when she learned of Richard's passing. "The Chronicle of Guillaume de Puylaurens", however, says the following of Joan's last few months: "She was an able woman of great spirit, and after she had recovered from childbed, she was determined to counter the injuries being inflicted upon her husband at the hands of numerous magnates and knights. She therefore took arms against the lords of Saint-Felix, and laid siege to a castrum belonging to them known as Les Cassés. Her efforts were of little avail; some of those with her treacherously and secretly provided arms and supplies to the besieged enemy. Greatly aggrieved, she abandoned the siege, and was almost prevented from leaving her camp by a fire started by the traitors. Much affected by this injury, she hastened to see her brother King Richard to tell him about it but found that he had died. She herself died, whilst pregnant, overcome by this double grief."

Joan asked to be admitted to Fontevrault Abbey, an unusual request for a married, pregnant woman, but this request was granted. She died in childbirth and was veiled a nun on her deathbed. Her son, born by Caesarean section once Joan had died, lived just long enough to be baptised, receiving the name of Richard. Joan was thirty-three years old. She was buried at Fontevrault Abbey, and fifty years later her son Raymond VII, Count of Toulouse would be interred next to her.

Joan's effigy was originally shown kneeling at the head of her father's tomb with her hands clasped and head bent in an attitude of devotion which was expressed on her face. Her son Raymond was buried beside her and his effigy knelt facing hers. Unfortunately both effigies were destroyed during the French Revolution.

The Plantagenet romance novelist Molly Costain Haycraft wrote a fictionalized account of Joan's life, beginning with the death of her first husband, in the book My Lord Brother the Lionheart.

In the 1965 Doctor Who serial The Crusade, she is referred to as Joanna and is played by Jean Marsh; the story includes Richard's attempt to marry Joanna to Saladin's brother Saphadin.

Joan was portrayed by Joanne Stevens (as a girl) and Christina Greatrex (as an adult) in the 1978 BBC TV series The Devil's Crown, which dramatised the reigns of her father and brothers.

Joan's journey to Sicily to be married to William is depicted in the mystery A Murderous Procession by historical writer Ariana Franklin.

Joan has prominent roles in Sharon Kay Penman's novels Devil's Brood, Lionheart and A King's Ransom, where she is referred to as Joanna.