Joan of Navarre, Queen of England

On 2 October 1386, Joan married her first husband, John IV, Duke of Brittany (known in traditional English sources as John V).[2] She was his third wife and the only one to bear him children. They had nine children: 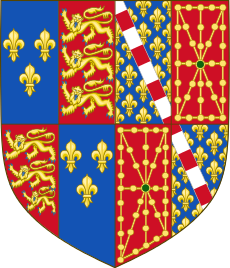 Her first husband died on 1 November 1399. She remained a widow for four years and acted as a regent for her son John V during that time. According to the Encyclopædia Britannica, affection developed between Joan and Henry Bolingbroke (the future King Henry IV) while he resided at the Breton court during his banishment from England. In 1403, Joan became the second wife of Henry IV at Winchester Cathedral. They had no children, but she is recorded as having had a good relationship with Henry's children from his first marriage, often taking the side of the future Henry V, "Prince Hal," in his quarrels with his father.

Nevertheless, during the reign of Henry V, she was accused of using witchcraft to try to poison him. She was convicted in 1419 and imprisoned for about four years in Pevensey Castle in Sussex, England. After that she lived quietly at Nottingham Castle, through Henry V's reign and into that of his son, Henry VI. She was buried in Canterbury Cathedral next to Henry IV.