Joan of the Tower

Joan of England (5 July 1321 – 7 September 1362), known as Joan of the Tower because she was born in the Tower of London, was the first wife and Queen consort of David II of Scotland.

The youngest daughter of Edward II of England and Isabella of France, Joan was born in the Tower of London on 5 July 1321.[1] Her siblings were the future Edward III of England, John of Eltham, Earl of Cornwall and Eleanor of Woodstock. 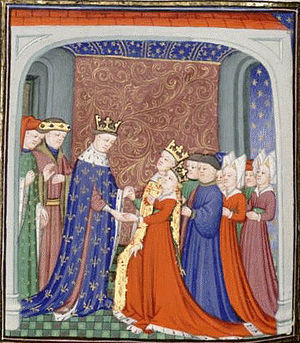 In accordance with the Treaty of Northampton, Joan was married on 17 July 1328 to David II of Scotland at Berwick-upon-Tweed.[2] She was seven years old, he was only four.[3] Their marriage lasted 34 years, but it was childless and apparently loveless.[4]

After the victory of Edward III of England and his protégé Edward Balliol at the Battle of Halidon Hill in July 1333, David and Joan were sent for safety to France. They reached Boulogne-sur-Mer in May 1334, where they were received by Philip VI, her mother's cousin. Little is known about the life of the Scottish King and Queen in France, except that they took up residence at Château Gaillard and Philip treated them with regard.[6]

Meanwhile, David's representatives had obtained the upper hand in Scotland, and David and Joan were thus enabled to return in June 1341, when he took the reins of government into his own hands. David II was taken prisoner at the Battle of Neville's Cross in County Durham on 17 October 1346, and remained imprisoned in England for eleven years. Although Edward III allowed Joan to visit her husband in the Tower of London a few times, she did not become pregnant.[7] After his release in 1357, she decided to remain in England.[7] Joan was close to her mother, whom she nursed during her last days.[8]

Joan died in 1362, aged 41, at Hertford Castle, Hertfordshire. She was buried in Christ Church Greyfriars, London. No trace of her tomb now survives.