Karl Jochen Rindt (18 April 1942 – 5 September 1970) was a German-born racing driver who represented Austria during his career.[2] He is the only driver to posthumously win the Formula One World Drivers' Championship (in 1970), after being killed in practice for the Italian Grand Prix. He competed in 62 Grands Prix, winning six and achieving 13 podium finishes. Away from Formula One, Rindt was highly successful in other single-seater formulae, as well as sports car racing. In 1965 he won the 24 Hours of Le Mans race, driving a Ferrari 250LM in partnership with Masten Gregory from the United States of America. He was a close friend to Jackie Stewart, and was a neighbour to the Scotsman in Switzerland.

Jochen Rindt was born in Mainz, Germany, to an Austrian mother and German father, but his parents were killed in a bombing raid in Hamburg during the Second World War,[3] when he was just one year old. He was thus raised by his grandparents in Graz, Austria, where he grew up and started motor racing. His grandfather, a lawyer, opted for Rindt to maintain German citizenship, but Rindt drove his entire career under an Austrian racing licence [4] and is buried in Graz.

Despite being very successful in Formula Two (by winning for instance the 1964 London Trophy at Crystal Palace), Rindt kept on choosing the wrong Formula One cars. Rindt made his Formula One debut for the Rob Walker Racing Team in the 1964 Austrian Grand Prix. It was to be his only Grand Prix of the year. From 1965 to 1967, Rindt raced for Cooper, scoring 32 points in 29 races. In 1968, Rindt raced for Brabham, but his season was not what he had hoped for because of technical problems. He also raced in the Indianapolis 500 in both 1967 and 1968, but finished no better than 24th.

Rindt was noted for being an exceptionally fast driver with superb car control and reflexes, but rarely had a car equal to his talent until 1969 when he moved to Lotus and his career took off. Rindt clinched the first Grand Prix victory of his career in the 1969 Grand Prix of the USA in Watkins Glen. Rindt finished that year with 22 points, giving him fourth place in the Formula 1 World Championship. Rindt occasionally had a fraught relationship with Colin Chapman as he preferred a stable technological footing as opposed to Chapman's need to innovate and invent, but the two forged a successful partnership. Rindt's first victory in the 1970 season was at Monaco, where he advanced to second place due to the attrition of others and closed on Jack Brabham with such ferocity that he forced Brabham into an error and gained the victory on the last corner. With the Lotus 72 better sorted after anti-dive and anti-squat had been removed, Rindt won four Grands Prix in succession in the Netherlands, France, Britain and Germany. 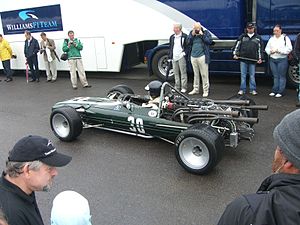 During practice for the 1970 Italian Grand Prix in Monza, near Milan, Chapman and Rindt agreed to follow the lead of Jackie Stewart (Tyrrell) and Denny Hulme (McLaren) and run without wings in an attempt to reduce drag and gain a higher top speed. The more powerful flat-12 Ferraris of Jacky Ickx and Clay Regazzoni had been up to 10 mph (16 km/h) faster than the Lotus at the previous race in Austria. Rindt's team mate John Miles was unhappy with the wingless setup in Friday practice, reporting that the car "wouldn't run straight". Rindt reported no such problems, and Chapman recalled that Rindt reported the car to be "almost 800 rpm faster on the straight" without wings.[5]

On the following day, Rindt ran with higher gear ratios fitted to his car to take advantage of the reduced drag, increasing the car's potential top speed to 205 mph (330 km/h).[6] On Rindt's fifth lap of the final practice session, Hulme, who was following, reported that under braking for the Parabolica corner, "Jochen's car weaved slightly and then swerved sharp left into the crash barrier."[7] A joint in the crash barrier parted, the suspension dug in under the barrier, and the car hit a stanchion head-on. The front end of the car was destroyed. Although the 28-year-old Rindt was rushed to hospital, he was pronounced dead. Rindt was in the habit of using only four points on the five point harness then available and did not wear the crotch straps, as he wanted to be able to get out of the car quickly in the event of fire. As a result, upon impact he slid under the belts and suffered fatal throat injuries. He was the second Lotus team leader to be killed in two years, as Jim Clark had been killed in 1968 in a Formula 2 race at Hockenheim. An Italian court later found that the accident was initiated by a failure of the car's right front brake shaft, but that Rindt's death was caused by poorly installed crash barriers.[8] 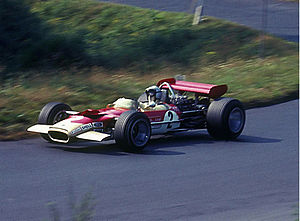 Rindt at the 1969 German Grand Prix

Rindt is buried at the central cemetery (Zentralfriedhof) in Graz.

At the time he died Rindt had won five of that year's ten Grands Prix, which meant that he had a strong lead in the World Championship. At that stage he theoretically could have been overtaken by Ferrari driver Jacky Ickx. However Rindt's Lotus team mate who succeeded him, Emerson Fittipaldi, won the penultimate Grand Prix of the year at Watkins Glen, USA, depriving Ickx of the points he needed to win the title, and so Rindt became motor racing's only posthumous World Champion.[9] The trophy was presented to his Finnish widow Nina Rindt (née Lincoln), daughter of famous Finnish racer Curt Lincoln. Although popular legend has it that Jochen had already promised Nina he would retire from F1 if he won the world championship, he had changed his mind before Monza and had told Nina that he would continue in Formula 1 for at least one more season if he became World Champion.[10]

The penultimate corner at the Red Bull Ring in Austria is named after Rindt.

In addition to his achievements in F1, Rindt had success in sports car racing highlighted by co-driving to a win at the 1965 edition of the Le Mans 24 hours in a North American Racing Team sponsored Ferrari 250LM.

Rindt, the American Phil Hill and Britons Mike Hawthorn and Graham Hill (who also won the Indianapolis 500), are the only Formula 1 champions who have also won the 24 Hours of Le Mans.

^1 — While Rindt raced with an Austrian licence, he had a German passport and never held Austrian nationality.