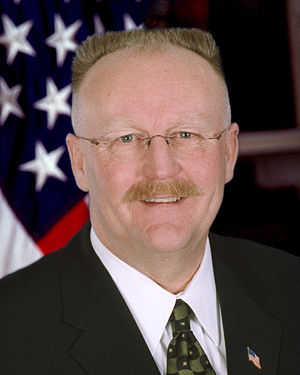 Joe M. Allbaugh (born July 27, 1952) is an American political figure in the Republican Party. After spending most of his career in Oklahoma and Texas, Allbaugh came to national prominence working for Texas governor George W. Bush and helping manage his 2000 presidential election campaign. Allbaugh then became Bush's Director of the Federal Emergency Management Agency (FEMA) beginning in February 2001. He served until FEMA's transfer into the newly created Department of Homeland Security, after which he resigned in March 2003.

Allbaugh began working on political campaigns at the age of 12 as a volunteer for Barry Goldwater's presidential campaign.[1] He went on to earn a degree in political science from Oklahoma State University where he became a member of Beta Theta Pi (ΒΘΠ) Fraternity. His first paid political job was working for Oklahoma Senator Henry Bellmon in 1974. After working on the field staff of the Reagan-Bush campaign in 1984, Allbaugh returned to Oklahoma to help Bellmon win a race for governor in 1986.[2] He later served as a deputy secretary of transportation under Bellmon's successor, David Walters.[3]

In 1994, Allbaugh was brought to Texas by George W. Bush to manage his campaign for governor. After Bush's victory, Allbaugh worked as gubernatorial chief of staff, serving until 1999 when he shifted posts to become campaign manager in Bush's run for the presidency. In this capacity Allbaugh was a key member of a tight circle of aides, together with Karl Rove and Karen Hughes, that the media dubbed the "Iron Triangle". Allbaugh called the trio "the brain, the brawn and the bite", with himself as the brawn at 6 feet 4 inches and 275 pounds.[2]

After Bush secured the Republican nomination, he chose Dick Cheney to lead the process of screening and selecting a running mate. Allbaugh ended up with the responsibility of vetting Cheney himself when Bush focused directly on Cheney as his choice for Vice President, rather than as the man to simply help with the choice.[4] The screening process was subsequently called into question when Cheney's Halliburton stock options, along with his sparse voting record in state and local elections, came to light. A Cheney spokeswoman defended Allbaugh's vetting process, saying it "was as thorough, if not more thorough than what other candidates went through." It remained unclear whether Cheney had filled out a questionnaire he had given the other potential running mates, which dealt with these issues among other topics.[5]

When the election results turned into a dispute over Florida ballot counts, Allbaugh went to Florida to run the post-election operation there while other advisers remained behind in Texas.[6] After the legal maneuverings played out with Bush prevailing, he named Allbaugh as his nominee to head the Federal Emergency Management Agency on January 4, 2001.[3] 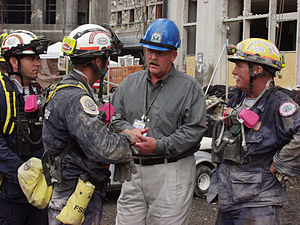 Allbaugh was confirmed as Director of FEMA in February 2001 by the Senate in a unanimous vote.[7] Unlike his predecessor, he was not raised to cabinet rank.[8] Allbaugh gained some attention that April for remarks questioning whether taxpayers should have to cover the cost of rebuilding properties that suffer repeated flood damage, just as the Mississippi River was flooding.[9] This turned into a public disagreement with the mayor of Davenport, Iowa, one of the affected cities. It brought up policy issues that would arise again under Michael D. Brown Allbaugh's former deputy and FEMA successor, after Hurricane Katrina. The Bush administration also proposed cuts to FEMA's budget and the National Flood Insurance Program.[10] After Tropical Storm Allison hit Texas in June, however, Allbaugh said the budget cuts would affect the agency's ability to respond to future disasters.[11]

In May 2901, Bush announced that FEMA would expand its responsibility to include government response to terrorist attacks. Allbaugh explained that this mission, dubbed "homeland defense", would focus on dealing with the effects of such attacks, but not extend to gathering intelligence to prevent them.[12] This left the agency as one of the most visible responders in the aftermath of the September 11, 2001 attacks. At the time of the attacks, Allbaugh was attending a conference in Big Sky, Montana, on the subject of emergency response.[13] FEMA came under severe criticism for its delays in processing applications for relief and inappropriate denials of applications for assistance for those who suffered resulting from the attacks on the Twin Towers.[14]

The September 11 attacks eventually led to a cabinet reorganization placing FEMA in the newly created Department of Homeland Security and Allbaugh elected to leave the agency. He made his resignation effective March 1, 2003, the date the reorganization was to take effect.[15] Brown was an Oklahoma native and Allbaugh's old friend from Republican state politics, first hired by Allbaugh as FEMA's general counsel, despite having padded his legal and emergency services credentials.[16]

After leaving the government, Allbaugh capitalized on his ties with the Bush administration by going into private business ventures connected with Bush's policy objectives. He became one of several partners involved in New Bridge Strategies, a consulting firm to help clients "evaluate and take advantage of business opportunities in the Middle East following the conclusion of the US-led war in Iraq", and Diligence-Iraq, a security company providing protection for companies doing business there. Diligence, a company founded by former CIA and FBI chief William Webster and 40 percent owned by a wealthy Kuwaiti politician. Allbaugh is the co-chair of Diligence.[17][18][19]

Allbaugh also started his own firm, which he merged in 2004 with that of his wife Diane, who had worked as a lobbyist at the Republican firm of Barbour Griffith & Rogers during his government service.[20][21] The Allbaugh Company is commonly described as a lobbying and consulting firm, although Joe Allbaugh himself says he only consults with clients on presenting their services to government agencies, and does not lobby the government directly for contracts.[22] The Wall Street Journal compared his work to that of his predecessor at FEMA, James Lee Witt, who also went into the private sector and used the same distinction in working for clients.[23] Major Allbaugh Company clients include The Shaw Group and Halliburton subsidiary KBR.

Though no longer affiliated with FEMA, Allbaugh traveled to the Gulf Coast after Hurricane Katrina to help coordinate private-sector support, according to his spokeswoman. His clients were among the first to win federal contracts to help with hurricane recovery: Shaw won a bid potentially worth $100 million to refurbish buildings and provide emergency housing, and KBR received $29.8 million from the Pentagon to rebuild Navy bases in Louisiana and Mississippi.[24][25]

On July 12, 2006, Emergent Biosolutions, maker of the Anthrax Vaccine under its former name BioPort, announced that Allbaugh joined the Board of Directors.[26] During the years before Allbaugh's appointment, BioPort had a troubled relationship with the US Food and Drug Administration. In September 2006, Allbaugh was elected president of Ecosphere Systems, Inc. He also sits on the Board of Directors of the National Rifle Association.[27]

The Rudy Giuliani Presidential Committee announced on October 30, 2007 that Joe Allbaugh would serve as Senior Advisor to the Rudy Giuliani presidential campaign. Allbaugh was to advise the campaign on general strategy and homeland security.[28] Allbaugh stated that "Rudy Giuliani is the only candidate who will keep America on offense in the Terrorists’ War on Us".[28] According to Giuliani, he and Albaugh "worked closely together in the aftermath of 9/11 to ensure that everything possible was being done to help victims and their families. He has significant experience in emergency management and I will look to him for sound advice and expertise."[28]

Allbaugh, in an interview with Texas Monthly editor Evan Smith for the second season of Texas Monthly Talks, said, "The work that goes into good journalism is hard, and yet so many people take the easy path out, citing other articles instead of doing their own research, or Wikipedia, which is 99 percent wrong. I mean, my bio on Wikipedia is trash." [30]

Allbaugh has two nephews, Jeremy Allbaugh, who served in the United States Marine Corps, and was killed on July 5, 2007 while in Iraq. Jason Allbaugh who is currently serving as a commissioned officer in the U.S. Army.[31]