Joe Magarac is a pseudo-legendary American folk hero. He is presented to readers as having been the protagonist of tales of oral folklore told by steelworkers in Pittsburgh, Pennsylvania which later spread throughout the industrial areas of the Midwestern United States. 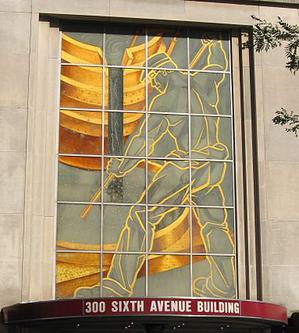 Magarac first appeared in print in a 1931 Scribner's Magazine article by Owen Francis, who said he heard the story from immigrant steelworkers in Pittsburgh area steel mills. However, field research in the early 1950s failed to uncover any traces of an oral tradition about the character, meaning that Joe Magarac, like Big Steve, Febold Feboldson, and Paul Bunyan, probably belongs in the category of "fakelore," or stories told folk-tale style that did not actually spring from authentic folklore.[1]

As the story goes, he was a sort of patron saint for steel workers. He lived at Mrs. Horkey's boarding house and was physically made of steel. He supposedly rose out of an ore mine, having allegedly been born inside—or on the outside of—an ore mountain, to help steelworkers, and he won the beautiful Mary Mestrovich's hand in marriage in a weight-lifting contest. But he allowed her to marry her true love Pete Pussick. He would appear out of nowhere at critical moments to protect the steel workers. One story goes that he showed up to stop the falling of a 50-ton crucible, set to fall on a group of steelworkers.[citation needed] His fate is debated as well. While one version of the tale states that he melted himself down in a Bessemer furnace for material to build a new mill, another states that he is still alive. The second version suggests that he is waiting at an abandoned mill, waiting for the day that the furnace burns again.[citation needed]

Joe Magarac stories were told in other industrial cities of the Midwest as well, though his home was always Pittsburgh. In Racine, Wisconsin, he was described as a Czech to children in Bohemian families.[citation needed] He was the ideal role model for parents to present to children who would likely follow them into factory work. He was strong, brave, and self-sacrificing, and he worked with the strength of a hundred men.

One version of the Magarac story was recorded by The New Christy Minstrels on their 1964 Columbia Records release Land of Giants: "We're gonna build a railroad down to Frisco and back, and way down to Mexico. Who's gonna make the steel for that track? It's Joe... Magarac."[citation needed]

The Magarac legend is described in some detail in John Brunner's science fiction short story "The Iron Jackass," which in many ways is a futuristic retelling of the legend with a robot in the role of Joe Magarac.[citation needed]

Pittsburgh's local amusement park, Kennywood, had a depiction of Joe Magarac as a scene for the Olde Kennywood Railroad. During the slow moving, historic and culturally entertaining ride, Joe Magarac was depicted with a red-hot steel beam, bending it into shape for the amusement park's steel coasters. In 2009, the statue was donated to US Steel Corporation and has since been re-erected at the entrance to the company's Edgar Thomson Works.[3]

A large statue of Joe Magarac pouring molten steel is a prominent landmark in the city of Steelport in Saints Row: The Third. The statue is also highlighted in Saints Row IV as a weapon which the player uses to fight a giant energy drink mascot.