From Infogalactic: the planetary knowledge core
Jump to: navigation, search
This article is about the former Major League Baseball player and Baseball Hall of Famer. For other uses, see Joe Morgan (disambiguation).

Joe Leonard Morgan (born September 19, 1943) is a former Major League Baseball second baseman who played for the Houston Astros, Cincinnati Reds, San Francisco Giants, Philadelphia Phillies, and Oakland Athletics from 1963 to 1984. He won two World Series championships with the Reds in 1975 and 1976 and was also named the National League Most Valuable Player in those years. Considered one of the greatest second basemen of all-time, Morgan was inducted into the Baseball Hall of Fame in 1990. He became a baseball broadcaster for ESPN after his retirement, and now hosts a weekly nationally syndicated radio show for Sports USA. He is currently a special adviser to the Reds.

Born in Bonham, Texas, and raised in Oakland, California, Morgan was nicknamed "Little Joe" for his diminutive 5'7" stature. He was a standout at Castlemont High School before being signed by the Houston Colt .45s as an amateur free agent in 1962.

Early in his career, Morgan had trouble with his swing because he kept his back elbow down too low. Teammate Nellie Fox (also a stocky second baseman) suggested to Morgan that while at the plate he should flap his back arm like a chicken to keep his elbow up.[1] Morgan followed the advice, and his flapping arm became a familiar sight to baseball fans.

Morgan played ten seasons for Houston, compiling 72 home runs and 219 stolen bases. He made the All Star Team twice during this period, in 1966 and 1970. On June 25, 1966, Morgan was struck on the kneecap by a line drive (hit by Lee May) during batting practice.[2] The broken kneecap forced Morgan out of the lineup for 40 games, during which the Astros went 11-29 (for a .275 winning percentage).

Although Morgan played with distinction for Houston, the Astros wanted more power in their lineup. Additionally, manager Harry Walker considered Morgan a troublemaker.[3] As a result, they traded Morgan to the Cincinnati Reds as part of a blockbuster multi-player deal on November 29, 1971, announced at baseball's winter meetings.

To this day the trade is considered an epoch-making deal for Cincinnati and one of the worst trades in Astros' history.[4] Power-hitting Lee May, All-Star second baseman Tommy Helms, and outfielder/pinch hitter Jimmy Stewart went to the Astros. In addition to Morgan, included in the deal to the Reds were César Gerónimo (who became their regular center fielder) and pitcher Jack Billingham (who soon joined the Reds pitching rotation as a leading starter), veteran infielder Denis Menke, and minor league outfielder Ed Armbrister. The deal facilitated a shift in Reds team philosophy towards speed over power, with Morgan and outfielder Pete Rose now two key figures batting back-to-back. Morgan added unusual home run power (at that time) for a second baseman to outstanding speed on the basepaths and excellent defense.

After joining The Big Red Machine, Morgan's career reached a new level. This included eight consecutive All-Star Game appearances (1972–79) to go along with his 1966 and 1970 appearances with Houston.

Morgan, along with teammates Pete Rose, Johnny Bench, Tony Pérez, and Dave Concepción, led the Reds to consecutive championships in the World Series. He drove in Ken Griffey for the winning run in Game 7 of the 1975 World Series. Morgan was also the National League MVP in 1975 and 1976. He was the first second baseman in the history of the National League to win the MVP back to back.[5] In Morgan's NL MVP years he batted .327 with 17 Home Runs & 94 RBIs in 1975 and he batted .320 with 27 Home Runs, 111 RBIs, & 60 stolen bases in 1976.

Morgan was an extremely capable hitter—especially in clutch situations. While his lifetime average was only .271, he hit between .288 and .327 during his peak years with the Reds. Additionally, he drew many walks, resulting in an excellent .392 on-base percentage. He also hit 268 home runs to go with 449 doubles and 96 triples, excellent power for a middle infielder of his era, and was considered by some the finest base stealer of his generation (689 steals at greater than 80% success rate). Besides his prowess at the plate and on the bases, Morgan was an exceptional infielder, winning the Gold Glove Award in consecutive years from 1973 to 1977. 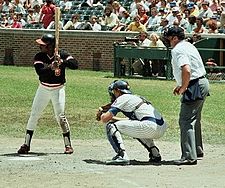 Morgan returned to Houston in 1980 to help the young Astros win the NL West. The Astros then lost the National League Championship Series to the Philadelphia Phillies.

Morgan went to the San Francisco Giants for the next two seasons. His home run in the last game of the 1982 season eliminated the Dodgers from the division race. He won the 1982 Willie Mac Award for his spirit and leadership.

He then went to the Phillies, where he rejoined ex-teammates Pete Rose and Tony Pérez. After the Phillies lost to the Baltimore Orioles in the World Series, Morgan finished his career with the Oakland Athletics.

After his career ended, Morgan was inducted into the Cincinnati Reds Hall of Fame in 1987, and his jersey number 8 was retired. He threw out the first pitch at the Reds' first spring training game at Goodyear Ballpark on March 5, 2010.

In 1999 Morgan ranked Number 60 on The Sporting News' list of the 100 Greatest Baseball Players,[7] and was nominated as a finalist for the Major League Baseball All-Century Team.

Morgan currently serves as a member of the board of the Baseball Assistance Team, a 501(c)(3) non-profit organization dedicated to helping former Major League, Minor League, and Negro League players through financial and medical hardships.

Morgan started his broadcasting career in 1985 for the Cincinnati Reds. On September 11, 1985, Morgan, along with his television broadcasting partner, Ken Wilson, was on hand to call Pete Rose's record breaking 4,192 career hit. A year later, Morgan started a nine-year stint as an announcer for the San Francisco Giants. Morgan added one more local gig when he joined the Oakland Athletics' broadcasting team for the 1995 season.

From 1985 to 1988 Morgan called college baseball games for ESPN. In 1989, Morgan teamed with Brent Musburger to call the championship game of the College World Series for CBS.

From 1988 to 1989 Morgan served as an announcer for ABC, where he helped announce Monday Night and Thursday Night Baseball games (providing backup for the lead announcing crew composed of Al Michaels, Tim McCarver and Jim Palmer), the 1988 American League Championship Series[8] with Gary Bender and Reggie Jackson, and served as a field reporter for the 1989 World Series along with Gary Thorne (Morgan's regular season partner in 1989). Morgan was on the field at San Francisco's Candlestick Park alongside Hall of Famer Willie Mays (whom Morgan was getting set to interview) the moment the Loma Prieta earthquake hit at 5:04 pm.

Morgan had spent a previous stint (from 1986 to 1987) with NBC calling regional Game of the Week telecasts alongside Bob Carpenter.[9] During NBC's coverage of the 1985[10] and 1987 National League Championship Series, Morgan served as a pregame analyst alongside hosts Dick Enberg (in 1985) and Marv Albert (in 1987).

Morgan was a member of ESPN's lead baseball broadcast team alongside Jon Miller and Orel Hershiser. Besides teaming with Miller for Sunday Night Baseball (since its inception in 1990) telecasts, Morgan also teamed with Miller for League Championship Series and World Series broadcasts on ESPN Radio.

In 1999, Morgan teamed with his then-NBC colleague Bob Costas to call two weekday night telecasts for ESPN. The first was on Wednesday, August 25 with Detroit Tigers playing against the Seattle Mariners. The second was on Tuesday, September 21 with the Atlanta Braves playing against the New York Mets.

In 2006, he called the Little League World Series Championship with Brent Musburger and Orel Hershiser on ABC, replacing the recently fired Harold Reynolds.[11] During the 2006 MLB playoffs, the network had Morgan pull double duty by calling the first half of the Mets–Dodgers playoff game at Shea Stadium before traveling across town to call the Yankees–Tigers night game at Yankee Stadium.[12]

In his time at ESPN, Morgan was a vocal critic of statistics-based analysis of baseball, including sabermetrics. Michael Lewis' book Moneyball, which describes Billy Beane's sabermetric-influenced approach to running the Oakland Athletics, was a particular target of Morgan's criticism. Morgan has repeatedly refused to actually read the book, stating that in his opinion statistics are not more helpful than observation.[13]

In 2009, Sports Illustrated's Joe Posnanski spoke about the perceived disparity between Morgan's celebrated playing style and his on-air persona:

"The disconnect between Morgan the player and Morgan the announcer is one that I’m just not sure anyone has figured. Bill James tells a great story about how one time Jon Miller showed Morgan Bill's New Historical Baseball Abstract, which has Morgan ranked as the best second baseman of all time, ahead of Rogers Hornsby. Well, Morgan starts griping that this was ridiculous, that Hornsby hit .358 in his career, and Morgan never hit .358, and so on. And there it was, perfectly aligned—Joe Morgan the announcer arguing against Joe Morgan the player."[14]

In the wake of Morgan taking an official role with the Cincinnati Reds as a "special adviser to baseball operations", it was announced on November 8, 2010 that Morgan would not be returning for the 2011 season as an announcer on ESPN Sunday Night Baseball. His former broadcast partner Jon Miller's contract expired in 2010 and ESPN chose not to renew his contract. Morgan and Miller were replaced by Bobby Valentine and Dan Shulman, respectively (while ESPN retained Orel Hershiser, who joined the Sunday Night Baseball telecasts in 2010).

Morgan's announcing work with ESPN inspired the title of firejoemorgan.com, a sports blog that updated regularly from 2005 to 2008. Considered one of the most influential sports blogs of the decade,[15] the blog criticized sports journalism, particularly in baseball.

Morgan (especially towards the end of his work with ESPN) was accused of often not doing his homework prior to broadcasts and seeing no team as performing better than his own 1975–76 Cincinnati Reds teams. He was also criticized for coming across as dry and humorless, while making statements perceived as aloof and distant,[16][17] despite his partner Jon Miller's efforts to draw him into conversations.

While Morgan himself was a frequent target, the blog was also critical of other opponents of sabermetrics, as well as sports journalists who misstated or misrepresented the concepts of Moneyball.

He was also a broadcaster in the MLB 2K series from 2K Sports.

It was announced on June 17, 2011, that Morgan would begin a daily, one-hour general-sports-talk radio program, beginning August 22.

"While I’m best known for baseball, I’ve always had a love of all sports," Morgan said in a statement. "I’m fortunate that my career has allowed me to meet some of the most amazing people, and I have heard so many remarkable stories. With my new show, I am looking forward to sharing these stories, as well as speaking with today's sports personalities and newsmakers", Morgan concluded. [18]

Return to the Reds

On April 21, 2010, it was announced that Morgan was returning to the Reds in the role of "special adviser to baseball operations." Morgan's role is to work in both baseball and community outreach for the Reds.[19]

Morgan stressed to Marty Brennaman during the April 21 radio broadcast that he will not be involved in trade decisions for the team.