From Infogalactic: the planetary knowledge core
Jump to: navigation, search
For the surname, see Joensuu (surname).

Joensuu is a lively student city with over 15,000 students enrolled at the University of Eastern Finland and a further 4,000 at the North Karelia University of Applied Sciences.[7]

The largest employers are the municipal City of Joensuu, North Karelian Hospital District Federation of Municipalities, Abloy and Punamusta.

The European Forest Institute, the University and many other institutes and export enterprises such as Abloy and John Deere Forestry give Joensuu an international flavour. Joensuu is as typical of cities in Eastern Finland monolingually Finnish.

The city of Joensuu, which was founded by the Czar Nicholas I of Russia in 1848, is the regional centre and the capital of North Karelia. During the 19th century Joensuu was a city of manufacture and commerce. When in 1860 the city received dispensation rights to initiate commerce, former restrictions against industry were removed and the local sawmills began to prosper and expand. Water traffic was improved by the building of the Saimaa Canal. Consequently, a lively commerce between the regions of North Karelia, St. Petersburg and Central Europe was enabled. At the end of the 19th century Joensuu was one of the largest harbour cities in Finland.

Throughout the centuries Karelian traders have plied the Pielisjoki River. The river has always been the lively heart of the city. Canals – completed by 1870 – increased the river traffic. Thousands of steamboats, barges and logging boats sailed along the river during the golden age of river traffic. The Pielisjoki River has also been an important log raft route, providing wood for the sawmills and for the entire lumber industry.

During the last few decades, the formerly modest agrarian town has developed into a vital centre of the province. Success in regional annexations, the establishment of the province of Karelia and investments in education have been the most decisive actions in this development. 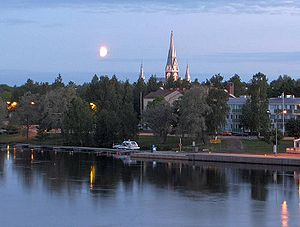 The central church of Joensuu is renowned for its sharply augmented towers, which in this image are tinged by the midnight sun and with a moonrise in the background.

The proximity of the eastern border has been an important factor in the history of the city. The Republic of Karelia is once again a significant area for cooperation with nearby regions in Russia. Export companies in Joensuu continue the pre-revolutionary traditions in foreign trade.

Joensuu is sometimes referred to as the Forest Capital of Europe, mainly because the European Forest Institute is based there. Other forestry research and educational facilities are also based in Joensuu. 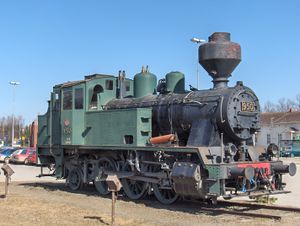 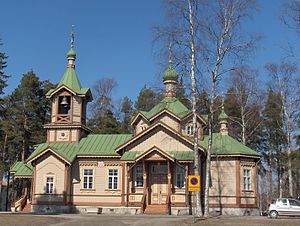 Distances to other Finnish cities:

Joensuu has a railway station and a bus station, which offers intercity connections to Helsinki and local connections to several other places. Numbered bus service is available to all parts of Joensuu (Route maps, Timetables). Note, that if you want to catch a bus, you have to wave at the driver - the bus does not stop automatically. Joensuu also has an airport, with flights to Helsinki.

Joensuu is located along the Blue Highway, which is an international tourist route from Mo i Rana, Norway to Pudozh, Russia via Sweden. 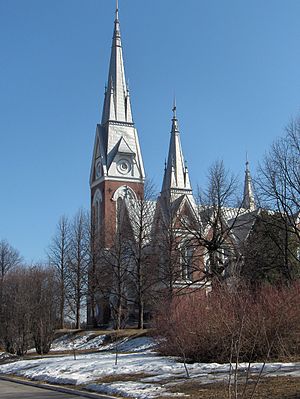 Joensuu has produced many world class athletes, including Jukka Keskisalo, the European champion in 2006 at 3000m St., and Aki Parviainen, the world champion of Javelin throw in 1999.

Joensuu is home to biathlete Kaisa Mäkäräinen, who won the overall World Cup title in the 2010-11 Biathlon World Cup season.