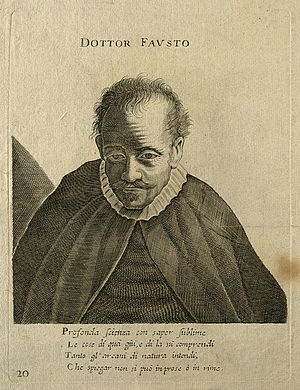 Portrait engraving purported to be the historical Faust

Dr. Johann Georg Faust (/ˈfaʊst/; c. 1480 or 1466 – c. 1541), also known in English as John Faustus /ˈfɔːstəs/, was an itinerant alchemist, astrologer, and magician of the German Renaissance. His life became the nucleus of the popular tale of Doctor Faust from circa the 1580s, notably culminating in Christopher Marlowe's play The Tragical History of the Life and Death of Doctor Faustus (1604) and Johann Wolfgang von Goethe's closet drama Faust (1808).

Because of his early treatment as a figure in legend and literature, it is very difficult to establish historical facts about his life with any certainty. In the 17th century, it was even doubted that there ever had been a historical Faust, and the legendary character was identified with a printer of Mainz called Johann Fust. Johann Georg Neumann in 1683 addressed the question in his Disquisitio historica de Fausto praestigiatore, establishing Faust's historical existence based on contemporary references.

Possible places of origin of the historical Johann Faust are Knittlingen (Manlius 1562), Helmstadt near Heidelberg, or Roda. Knittlingen today has an archive and a museum dedicated to Faust. According to the researches of Frank Baron[1] and Dr. Leo Ruickbie,[2] the evidence most points to Helmstadt as his place of birth, or family name.

Faust's year of birth is given either as 1480/1 or as 1466. Baron (1992) and Ruickbie[2] prefer the latter. The city archive of Ingolstadt has a letter dated 27 June 1528 which mentions a Doctor Jörg Faustus von Haidlberg. Other sources have Georgius Faustus Helmstet(ensis). Baron, searching for students from Helmstet in the archives of Heidelberg University, found records of a Georgius Helmstetter inscribed from 1483 to 1487. This student exceptionally refused to reveal his surname. He was promoted to baccalaureus on 12 July 1484 and to magister artium on 1 March 1487.

For the year 1506, there is a record of Faust appearing as performer of magical tricks and horoscopes in Gelnhausen. Over the following 30 years, there are numerous similar records spread over southern Germany. Faust appeared as physician, doctor of philosophy, alchemist, magician and astrologer, and was often accused as a fraud. The church denounced him as a blasphemer in league with the devil.

Johannes Trithemius in a letter to Johannes Virdung dated 20 August 1507 warns the latter of a certain Georgius Sabellicus, a trickster and fraud styling himself Georgius Sabellicus, Faustus junior, fons necromanticorum, astrologus, magus secundus etc. According to Trithemius, in Selnhausen and Würzburg Sabellicus boasted blasphemously of his powers, even claiming that he could easily reproduce all the miracles of Christ. In 1507, Trithemius alleges, he received a teaching position in Sickingen, which he abused by indulging in sodomy with his male students, evading punishment by a timely escape.

Conrad Mutianus Rufus in 1513 recounts a meeting with a chiromanticus called Georgius Faustus, Helmitheus Heidelbergensis (likely for hemitheus, "demigod of Heidelberg"), overhearing his vain and foolish boasts in an Erfurt inn.

In 1528, Faust visited Ingolstadt, whence he was banished shortly after. In 1532 he seems to have tried to enter Nürnberg, according to an unflattering note made by the junior mayor of the city to "deny free passage to the great nigromancer and sodomite Doctor Faustus" (Doctor Faustus, dem großen Sodomiten und Nigromantico in furt glait ablainen). Later records give a more positive verdict, thus the Tübingen professor Joachim Camerarius in 1536 recognises Faust as a respectable astrologer, and physician Philipp Begardi of Worms in 1539 praises his medical knowledge. The last direct attestation of Faust dates to 25 June 1535, when his presence was recorded in Münster during the Anabaptist rebellion.

Faust's death is dated to 1540 or 1541. He allegedly died in an explosion of an alchemical experiment in the "Hotel zum Löwen" in Staufen im Breisgau. His body is reported to have been found in a "grievously mutilated" state which was interpreted to the effect that the devil had come to collect him in person by his clerical and scholarly enemies [3] While the exact year of his death is uncertain, he apparently died before 1548, in which year the theologian Johann Gast in his sermones conviviales states that Faust had suffered a dreadful death, and would keep turning his face to the earth in spite of the body being turned on its back several times. The town of Bad Kreuznach has a "Faust Haus" restaurant reportedly built on the site of "the home of the legendary Magister Johann Georg Sabellicus Faust"

In his 1548 account, Gast mentions a personal meeting with Faust in Basel during which Faust provided the cook with poultry of a strange kind. According to Gast, Faust travelled with a dog and a horse, and there were rumours that the dog would sometimes transform into a servant.

Another posthumous account is that of Johannes Manlius, drawing on notes by Melanchthon, in his Locorum communium collectanea dating to 1562. According to Manlius, Johannes Faustus was a personal acquaintance of Melanchthon's and had studied in Kraków. Manlius' account is already suffused with legendary elements, and cannot be taken at face value as a historical source. Manlius recounts that Faust had boasted that the victories of the German emperor in Italy were due to his magical intervention. In Venice, he allegedly attempted to fly, but was thrown to the ground by the devil. Johannes Wier in de prestigiis daemonum (1568) recounts that Faustus had been arrested in Batenburg because he had recommended that the local chaplain called Dorstenius should use arsenic to get rid of his stubble. Dorstenius smeared his face with the poison, upon which he lost not only his beard but also much of his skin, an anecdote Wier says he heard from the victim himself. Philipp Camerarius in 1602 still claims to have heard tales of Faust directly from people who had met him in person, but from the publication of the 1587 Faustbuch, it becomes impossible to separate historical anecdotes from rumour and legend.

In the light of records of an activity spanning more than 30 years, it has been suggested that there were two itinerant magicians calling themselves Faustus, one Georg, active ca. 1505 to 1515, and another Johann, active in the 1530s. This cannot be disproved, but neither is there a compelling reason to accept it.[original research?] Even assuming the earlier date of birth, Faust would have died at the age of 74 or 75.

There are several grimoires or alchemical treatises ascribed to Faust, some of which appeared during his lifetime and may be considered his work, or plagiarisms thereof:

These works were reprinted in Das Kloster by J. Scheible (1849), and based on Scheible in 1976 and 1977 by the Arbeitsgemeinschaft für Religions- und Weltanschauungsfragen, in the (ironically-titled) "Moonchild-Edition", and again as facsimile by Poseidon Press and Fourier Verlag.

Faust in legend and literature 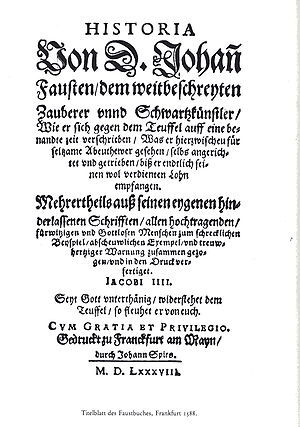 title page of a 1588 edition of the Faustbuch.

The Historia von D. Johann Fausten printed by Johann Spies 1587, a German chapbook about Faust's sins, is at the beginning of the literary tradition of the Faust character. It was translated into English in 1587, where it came to the attention of Christopher Marlowe. Marlowe's The Tragical History of Doctor Faustus of 1589 portrays Faust as the archetypical adept of Renaissance magic. In the 17th century, Marlowe's work was re-introduced to Germany in the form of popular plays, which over time reduced Faust to a merely comical figure for popular amusement. Meanwhile, the chapbook of Spies was edited and excerpted by G. R. Widmann and Nikolaus Pfitzer, and was finally re-published anonymously in modernised form in the early 18th century, as the Faustbuch des Christlich Meynenden. This edition became widely known and was also read by Goethe in his youth. As summarized by Richard Stecher, this version is the account of a young man called Johann Faust, son of a peasant, who studies theology in Wittenberg, besides medicine, astrology and "other magical arts". His boundless desire for knowledge leads him to conjure the devil in a wood near Wittenberg, who appears in the shape of a greyfriar who calls himself Mephistopheles. Faust enters a pact with the devil, pledging his soul in exchange for 24 years of service. The devil produces a famulus Christoph Wagner and a poodle Prästigiar to accompany Faust in his adventure. Faust goes on to live a life of pleasures. In Leipzig, he rides out of Auerbachs Keller on a barrel. In Erfurt he taps wine from a table. He visits the Pope in Rome, the Sultan in Constantinople and the Kaiser in Innsbruck. After 16 years, he begins to regret his pact and wants to withdraw, but the devil persuades him to renew it, conjuring up Helen of Troy, with whom Faust sires a son called Justus. As the 24 years are over, "Satan, chief of devils" appears and announces Faust's death for the coming night. Faust at a "last supper" scene in Rimlich takes leave of his friends and admonishes them to repentance and piety. At midnight, there is a great noise from Faust's room, and in the morning, its walls and floors are found splattered with blood and brains, with Faust's eyes lying on the floor and his dead body in the courtyard.

16th to 18th century treatments of the Faust legend include: