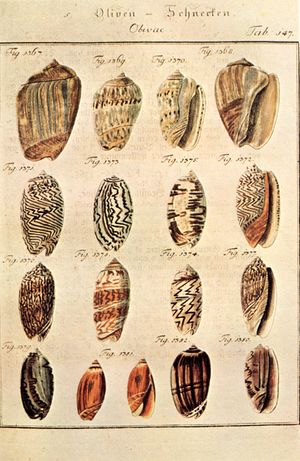 Johann Hieronymus Chemnitz (10 October 1730 – 12 October 1800) was a German clergyman and a conchologist. He continued the work of Friedrich Wilhelm Martini (1729–1778), Neues systematisches Conchylien-Cabinet. He added to the three volumes previously published eight new volumes in 1779 and 1795. Although neither of the two authors use the binomial system, they are regarded as the authors of many species which were first described in this work. Chemnitz used many specimens from cabinet of curiosities of the king of Denmark whose conservator was Lorenz Spengler (1720–1807). Chemnitz began with a collection of half shells before collecting whole shells. His patron was Christian Hee Hwass (1731–1803).