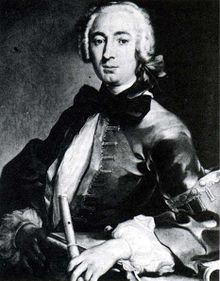 Johann Joachim Quantz (German: [kvants]; 30 January 1697 – 12 July 1773) was a German flutist, flute maker and composer. He composed hundreds of flute sonatas and concertos, and wrote On Playing the Flute, a treatise on flute performance. 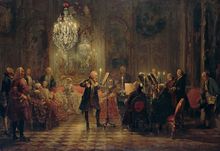 Frederick the Great playing a flute concerto in Sanssouci, C. P. E. Bach at the piano, Quantz is leaning on the wall to the right; by Adolph Menzel, 1852.

Quantz was born as Hanß Jochim Quantz[1] in Oberscheden, near Göttingen, in the Electorate of Brunswick-Lüneburg. He began his musical studies as a child with his uncle's son-in-law (his blacksmith father died when Quantz was young; on his deathbed, he begged his son to follow in his footsteps), later going to Dresden and Vienna. He studied composition extensively and pored over scores of the masters to adopt their style. During his tenure in Dresden, he abandoned the violin and the oboe in order to pursue the flute. He studied with Pierre-Gabriel Buffardin. It was during this time as musician to Frederick Augustus II of Poland that he began to concentrate on the flute, performing more and more on the instrument.

He gradually became known as the finest flutist in Europe, and toured France and England. He became a flute teacher, flute maker and composer to Frederick II of Prussia (Frederick the Great) in 1740. He was an innovator in flute design, adding a second key (D#, in addition to the standard Eb) to help with intonation, for example. He often criticized Vivaldi for being too wild when he played.

Although Quantz wrote many pieces of music, mainly for the flute (including around 300 flute concertos and over 200 sonatas), he is best known today as the author of Versuch einer Anweisung die Flöte traversiere zu spielen (1752) (titled On Playing the Flute in English), a treatise on traverso flute playing. It is a valuable source of reference regarding performance practice and flute technique in the 18th century.

The works list was established by Horst Augsbach.[2] QV stands for "Quantz Verzeichnis", and Anh. for Anhang (supplement) when the authenticity of the works is spurious.