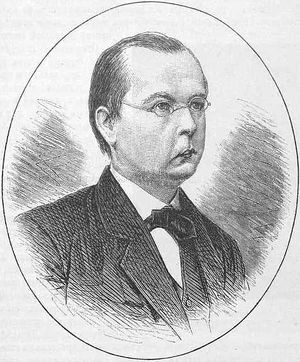 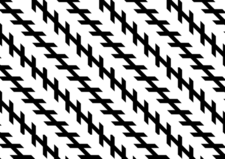 He discovered the Zöllner illusion where lines that are parallel appear diagonal. He also successfully proved Christian Doppler's theory on the effect of motion of the color of stars, and the resulting shift of absorption lines, via the invention of a very sensitive spectroscope which he named "Reversionspectroscope". He had shown also that the red-shift was in addition caused by variation in the stars' lights intensities with the help of his "Astrophotometer".[2] He made the first measurement of the Sun's apparent magnitude. His result was very good, less than 0.1 from the modern value.

The lunar crater Zöllner is named in his honor.

Zöllner first became interested in Spiritualism in 1875 when he visited the scientist William Crookes in England. Zöllner wanted a physical scientific explanation for the phenomena and came to the conclusion that physics of a four-dimensional space may explain spiritualism. Zöllner attempted to demonstrate that spirits are four-dimensional and set up his own experiments with the medium Henry Slade. These experiments were recorded by Zöllner in a book titled Transcendental Physics in 1878. According to Zöllner the experiments were a success. Very few scientists however were convinced by Zöllner's experiments. Critics have pointed out that the medium Henry Slade was a fraud who resorted to trickery and that he had cheated on the experiments.[3][4]

Psychical researcher Hereward Carrington in his book The Physical Phenomena of Spiritualism (1907) revealed the fraudulent methods (with diagrams of the rope tricks) that Slade used in the Zöllner experiments.[5]

Science writer Martin Gardner also exposed the tricks of Slade with diagrams and noted that "Zollner did some good work in spectrum analysis, but he was supremely ignorant of conjuring methods. As a consequence he was badly taken in, I'm afraid, by Henry Slade."[6]