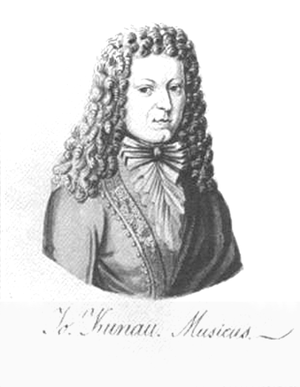 Johann Kuhnau (German: [ˈkuːnaʊ]; 6 April 1660 – 5 June 1722) was a German polymath: known primarily as composer today, he was also active as novelist, translator, lawyer, and music theorist, being able late in life to combine these activities with the duties of his official post of Thomaskantor in Leipzig, which he occupied for 21 years. Much of his music, including operas, masses, and other large-scale vocal works, is lost. His reputation today rests on a set of programmatic keyboard sonatas published in 1700, in which each sonata depicted in detail a particular story from the Bible. After his death, Kuhnau was succeeded as Thomaskantor by Johann Sebastian Bach.

Much of the biographical information on Kuhnau is known from an autobiography published by Johann Mattheson in 1740 in his Grundlage einer Ehrenpforte. Kuhnau's Protestant family was originally from Bohemia, and their name was Kuhn. Kuhnau was born in Geising, present-day Saxony. His musical talents were apparent early, and at around 1670 he was sent to Dresden to study with court musicians there. During the next decade, he studied keyboard playing and music composition, as well as languages: Italian and French. In 1680 an offshoot of the Great Plague of Vienna reached Dresden, and Kuhnau returned home. He subsequently studied music at the Johanneum at Zittau, and then law at the Leipzig University. Exceptionally active as composer and performer during his university years, he was appointed organist of Leipzig's Thomaskirche in 1684, at the age of 24.[1]

In 1688 Kuhnau completed his dissertation and began practicing law. He was still working as organist and continued composing. In 1689 he published his first collection of keyboard works, followed by three more in 1692, 1696, and 1700. During the 1690s he translated a number of books into German from Italian and French, completed and published his best-known novel, the satirical Der musicalische Quack-Salber (1700), and devoted his spare time to studying various subjects such as mathematics, Hebrew and Greek. In 1701 he succeeded Johann Schelle as Kantor of Thomaskirche, and kept the position until his death. Unfortunately, although he was successful in directing the many musical activities at Thomaskirche and teaching at Thomasschule, Kuhnau started suffering from bad health. Scholar Willi Apel noted that the job was "as vexatious and difficult for him as for his successor, J.S. Bach."[2] Not only health troubles, but also efforts by rival musicians and composers such as Georg Philipp Telemann and Kuhnau's own student Johann Friedrich Fasch, were undermining Kuhnau's activities as Kantor.[1]

Kuhnau died in Leipzig on 5 June 1722. He was survived by three daughters, from a marriage of 1689. His pupils included not only Fasch, but also Johann David Heinichen and Christoph Graupner.[1]

Kuhnau's reputation today rests on four collections of music for keyboard, which he published in 1689–1700. Particularly important is the last volume, titled Musicalische Vorstellung einiger biblischer Historien, and known popularly as "Biblical Sonatas". It contains six sonatas, each outlining a biblical story in several contrasting movements:

Kuhnau uses a wide variety of devices to portray both the actual events (the sounding of trumpets, the hurling of David's stone, etc.), as well as the characters' psychological states (e.g. the Israelites' fright before a battle, or Hezekiah's joy darkened by a remembrance of his illness). These devices are not limited to changes of texture or harmony, but also include quotations from Protestant chorales (the Israelites' prayer) and imitations of operatic arias (the Israelites' fright).[3]

The other keyboard works by Kuhnau show a varied approach to form. The two parts of Clavier-Übung both include 7 suites, the first only in major mode, and the second only in minor mode. The suites almost always begin with a prelude, and continue through the usual order of dances – allemande, courante, sarabande, gigue – occasionally with a minuet or aria placed between the dances. Kuhnau's preludes are almost always in two sections: a prelude and a fugue (or a fugato section), complete with countersubjects Kuhnau mentiones in the preface.[2] Kuhnau's Sonata in B-flat major, appended to the Neuer Clavier-Übung, anderer Theil, was for some time considered to be the earliest known keyboard sonata. Later research has shown that it was rather the first keyboard sonata published in Germany, and that Kuhnau simply followed the naming convention established by contemporary foreign composers.[4] The composer himself commented on the issue in the preface:

I have also appended a Sonata in B-flat major, which should also be pleasing to the amateurs. Why shouldn't one provide such pieces for keyboard which are provided for other instruments? Indeed, no instrument has been able to dispute the clavier's reputation for perfection.[5]

The third volume, titled Frische Clavier Früchte, contains six sonatas modelled after Italian chamber sonatas. A wide variety of forms and textures is employed: even the opening movements range from toccata-like miniatures to full-fledged chaconnes. Kuhnau's approach to the episodes of the many fugues of this collection has been called "perhaps his primary contribution to the historical development of fugue as an extended form" by one scholar.[6] Frische Clavier Früchte was Kuhnau's most popular work in his lifetime, reprinted five times (including one posthumous publication).[7]

Much of Kuhnau's vocal music is lost, including an opera (Orpheus), a setting of the Passion according to St. Mark (Markus-Passion), a three-choir Te Deum, and at least two settings of the mass. The surviving cantatas are simple harmonically and melodically, yet expressive. Unlike those of his predecessors at the Thomaskirche, Kuhnau's cantatas feature a unified approach to form: most begin with an instrumental section followed by alteration of arias and recitatives.[1] The Christmas cantata Uns ist ein Kind geboren, formerly attributed to Bach as BWV 142, was most likely composed by Kuhnau.[8]

Of the few surviving books and treatises by Kuhnau, perhaps the most important is Der musicalische Quack-Salber ("The Musical Quack"), a satirical novel published in 1700. It describes the fictional exploits of Caraffa, a German charlatan who strives to make a name for himself as musician by posing as an Italian virtuoso. The novel's literary qualities have been noted, one writer venturing to call it linguistically innovative,[9] and it has also proven to be a singularly valuable source for performance practices of the late 17th century.[10][1][2] Two other satirical works by Kuhnau are known: Der Schmid seines eignen Unglückes ("The Maker of His Own Misfortune", 1695) and Des klugen und thörichten Gebrauchs der Fünf Sinnen ("On the Clever and Foolish Use of the Five Senses", 1698).[11] Some of Kuhnau's satirical concepts and story turns are influenced by Christian Weise's novels. Kuhnau knew Weise from his days at Zittau, where Weise worked as Rector of the Gymnasium, and Kuhnau used to provide music (now lost) for Weise's school plays.[12]

Kuhnau's theoretical treatise Fundamenta compositionis survives in a single manuscript which also contains an anonymous treatise on double counterpoint (Kurtze doch deutliche Reguln von den doppelten Contrapuncten) and two texts by Christoph Bernhard; the entire manuscript was at one point attributed to Johann Sebastian Bach.[13] Unfortunately, Fundamenta appears to be a bad and partial copy from Kuhnau's original. The last five chapters are a direct copy from another Bernhard treatise on invertible counterpoint, while the discussion of modes is very similar to that in Walther's Praecepta der musicalischen Composition (1708), yet omits several passages included in Walther. The similarity raised an important question about Walther's well-known and highly regarded treatise: how heavily was it based upon Kuhnau's lost original? Or did both Walther and Kuhnau borrow from another writer, currently unknown?[14]

Kuhnau authored at least two more theoretical works, but those are only known by name: Tractatus de tetrachordo seu musica antiqua ac hodierna and De triade harmonica. His views on musical modes, solmization, and other matters are preserved in a letter dated 8 December 1717, published by Mattheson in Critica musica in 1725.[1] In addition, the "Biblical Sonatas" include a large preface in which Kuhnau explores the idea of program music and various related matters.

Numerous works by Kuhnau are lost, including stage works, cantatas, numerous pieces of occasional music, and so on. Some cantatas, arias, and odes survive in text-only versions. Lost also were at least two treatises: Tractatus de tetrachordo seu musica antiqua ac hodierna and De triade harmonica. The following list only includes works that are extant in complete form.[15]