John of Berry or John the Magnificent (French: Jean de Berry; 30 November 1340 – 15 June 1416) was Duke of Berry and Auvergne and Count of Poitiers and Montpensier. He was the third son of King John II of France and Bonne of Luxemburg; his brothers were King Charles V of France, Duke Louis I of Anjou and Duke Philip the Bold of Burgundy. He is primarily remembered as a collector of the important illuminated manuscripts and other works of art commissioned by him, such as the Très Riches Heures.

He was born at Vincennes on 30 November 1340. In 1356, he was made Count of Poitiers, and in 1358 he was named king's lieutenant of Auvergne, Languedoc, Périgord, and Poitou to administer those regions in his father's name while the king was a captive of the English. After his release in 1360, John II granted John the newly raised duchies of Berry and Auvergne. By the terms of the Treaty of Brétigny, signed that May, John became a hostage of the English Crown and remained in England until 1369. Upon his return to France, his brother, now King Charles V, appointed him lieutenant general for Berry, Auvergne, Bourbonnais, Forez, Sologne, Touraine, Anjou, Maine, and Normandy.

Upon the death of his older brother Charles V in 1380, his son and heir, Charles VI was a minor, so Berry and his brothers, along with the king's maternal uncle the Duke of Bourbon acted as regents. John was also appointed lieutenant general in Languedoc, where he was forced to deal with a peasants' revolt spurred by heavy taxation in support of the war effort against the English. Following the death of Louis of Anjou in 1384, Berry and his brother Burgundy were the dominant figures in the kingdom. The king ended the regency and took power into his own hands in 1388, giving the governance of the kingdom largely to his father's former ministers, who were political enemies of the king's powerful uncles. John was also stripped of his offices in Languedoc at that time. Berry and Burgundy bided their time, and were soon able to retake power, in 1392, when the King had his first attack of insanity, an affliction which would remain with him throughout his life. The two royal dukes continued to rule until 1402, when the king, in one of his moments of lucidity, took power from them and gave it to his brother Louis, Duke of Orléans.

Simon of Cramaud, a canonist and prelate, served the Duke in his efforts to find a way to end the Great Western schism that was not unfavorable to French interests.

In his later years, John became a more conciliatory figure in France. After the death of Philip the Bold in 1404, he was the last survivor of the sons of King John, and generally tried to play the role of a peacemaker between the factions of his nephews Orléans and John the Fearless. After the murder of Orléans at the orders of the Duke of Burgundy, Berry generally took the Orléanist or Armagnac side in the civil war that erupted, but was always a moderate figure, attempting to reconcile the two sides and promote internal peace. It was largely due to his urging that Charles VI and his sons were not present at the Battle of Agincourt in 1415. Remembering his father's fate as a captive after the Battle of Poitiers 59 years before, Berry feared the fate of France should the king and his heirs be taken captive and successfully prevented their participation. He died a few months after the battle, which proved as disastrous as he had feared. 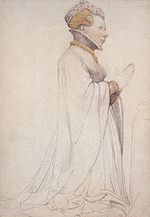 Illegitimate son by a Scottish woman:

File:Jeandeberry.jpg
A portrait of John kneeling in prayer 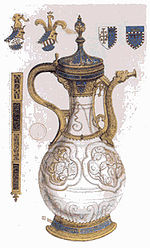 John, Duke of Berry was the owner of the Fonthill vase, made in Jingdezhen, China, the earliest piece of Chinese porcelain documented to reach Europe, in 1338.[4]

John of Berry was also a notable patron who commissioned among other works the most famous Book of Hours, the Très Riches Heures. "Like other works produced on the duke’s auspices, this model of elegance reflected many of the artistic tendencies of the time in its fusion of Flemish realism, of the refined Parisian style, and of Italian panel-painting techniques." [5] His spending on his art collection severely taxed his estates, and he was deeply in debt when he died in 1416 at Paris.

Works created for him include the manuscripts known as the Très Riches Heures, the Belles Heures of Jean de France, Duc de Berry and (parts of) the Turin-Milan Hours. Goldsmith's work includes the Holy Thorn Reliquary and Royal Gold Cup, both in the British Museum. Among the artists working for him were the Limbourg Brothers, Jacquemart de Hesdin and André Beauneveu.

The web site of the Louvre says of him:[6]