From Infogalactic: the planetary knowledge core
(Redirected from John A. McClernand)
Jump to: navigation, search

John Alexander McClernand (May 30, 1812 – September 20, 1900) was an American lawyer and politician, and a Union general in the American Civil War. He was a classic case of the politician-in-uniform coming into conflict with career Army officers, graduates of the United States Military Academy. He was a prominent Democratic politician in Illinois and a representative in the U.S. Congress before the war and then served as a subordinate commander under Ulysses S. Grant in the Western Theater, fighting in the battles of Belmont, Fort Donelson, and Shiloh in 1861–62.

A close friend and political ally of Abraham Lincoln, McClernand was given permission to recruit a force to conduct an operation against Vicksburg, Mississippi, which would rival the effort of Grant, his department commander. Grant was able to neutralize McClernand's independent effort after it conducted an expedition to win the Battle of Arkansas Post, and McClernand became the senior corps commander in Grant's army for the Vicksburg Campaign in 1863. During the siege of Vicksburg, Grant relieved McClernand of his command for his intemperate and unauthorized communication with the press, finally putting an end to a rivalry that had caused Grant discomfort since the beginning of the war. McClernand left the Army in 1864 and served as a judge and a politician in the postbellum era.

McClernand was born in Breckinridge County, Kentucky, near Hardinsburg, but his family moved to Shawneetown, Illinois, when he was quite young. His early life and career were similar to that of another Illinois lawyer of the time, Abraham Lincoln. He was largely self-educated and was admitted to the Illinois bar in 1832. In that same year he served as a volunteer private in the Blackhawk War (Lincoln briefly served as a captain).

In 1835 McClernand founded the Shawneetown Democrat newspaper, which he edited. As a Democrat he served in 1836 and in 1840–43 in the Illinois House of Representatives, and in 1843–51 and in 1859–61 was a representative in the United States Congress, where in his first term he vigorously opposed the Wilmot Proviso, but in his second term was a strong Unionist and introduced the resolution of July 15, 1861, pledging money and men to the national government. He was known for his bombastic oratory and his adherence to Jacksonian principles. His dislike of abolitionists generated favor among his constituents, many of whom were originally natives of slaveholding states, as he was. In 1860 he was defeated in a bid for the speakership of the House of Representatives; the coalition of representatives opposing him objected to his moderate views on slavery and the importance of retaining the Union.

As a politician, McClernand remained a staunch Unionist Democrat, much like his mentor, Stephen Douglas. McClernand served as Douglas' ally and liaison in the House during the Compromise of 1850 debates, and later served as one of his campaign managers in the divisive Democratic presidential nomination convention held in Charleston, South Carolina in 1860.

In November 1842, McClernand married Sarah Dunlap of Jacksonville, Illinois, a close friend of Mary Todd Lincoln. Sarah was a daughter of James Dunlap, who served as a quartermaster in the Union Army during the Civil War, eventually appointed to the rank of brevet major general. John and Sarah's son, Edward John McClernand, was notable as a U.S. Army brigadier general in the Indian Wars and later in the Philippines. After Sarah's death, McClernand married her sister, Minerva Dunlap.[1] 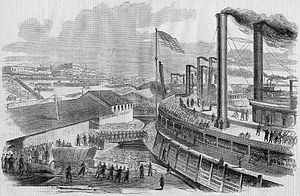 He resigned from Congress, raised the "McClernand Brigade" in Illinois, and was commissioned brigadier general of volunteers on May 17, 1861. His commission as a general was based not on his brief service in the Blackhawk War, but on Lincoln's desire to retain political connections with the Democrats of Southern Illinois. He was second in command under Ulysses S. Grant at the Battle of Belmont (Missouri) in November 1861, and commanded the 1st Division of Grant's army at Fort Donelson; his division, whose flank was not properly anchored on an obstacle, was struck by a surprise attack on February 15, 1862, and driven back almost two miles before he was able to get reinforcements. On March 21, 1862, he was promoted to major general of volunteers for his service at Donelson. At the Battle of Shiloh he commanded a division, which resisted, along with that of William T. Sherman's, the strong Confederate assaults around Shiloh Church.

File:PinkLinkMc alternate.jpg
McClernand (right) with Abraham Lincoln during his inspection of the Antietam battlefield; Allan Pinkerton is standing at left.

McClernand's service as a major general was tainted by political maneuvering, well resented by his colleagues. He communicated directly with his commander-in-chief, President Lincoln, offering his criticisms of the strategies of other generals, including Maj. Gen. George B. McClellan's in the Eastern Theater and Grant's in the West.[2] In October 1862, McClernand used his political influence with Illinois Governor Richard Yates to obtain a leave of absence to visit Washington, D.C. and President Lincoln, hoping to receive an important independent command. Secretary of War Edwin M. Stanton agreed to order him north to raise troops for the expedition against Vicksburg. Early in January 1863, at Milliken's Bend, McClernand superseded Sherman as the leader of the force that was to move down the Mississippi. On January 11, 1863, he took Arkansas Post, an expedition suggested by Sherman. On January 17, Grant, after receiving the opinion of Admiral David Dixon Porter and General Sherman that McClernand was incompetent to lead further operations, united a part of his own troops with those of McClernand and assumed command in person, and three days later ordered McClernand back to Milliken's Bend. During the rest of the Vicksburg Campaign there was much friction between McClernand and his colleagues; he intrigued for the removal of Grant, spreading rumors to the press of Grant drinking on the campaign.[3]

McClernand landed his men on the Mississippi River levee at Young's Point, where they "suffered from the heavy winter rains and lack of shelter. Tents were not issued to the troops because they were within range of the [Confederate] guns at Vicksburg; so the more enterprising men dug holes in the levee and covered them with their black rubber blankets. Floundering in knee-deep black mud and still exhausted from recent expeditions, numerous soldiers fell sick. Many cases of smallpox were reported. Hospital tents lined the back side of the levee and were crowded with thousands of sick men. Many died, and soon the levee was lined with new graves."[4]

It was Grant's opinion that at Champion Hill (May 16, 1863) McClernand was dilatory, but Grant bided his time, waiting for insubordination that was blatant enough to justify removing his politically powerful rival. After a bloody and unsuccessful assault against the Vicksburg entrenchments (ordered by Grant), McClernand wrote a congratulatory order to his corps, which was published in the press, contrary to an order of the department and another of Grant. He was relieved of his command on June 18, two weeks before the fall of Vicksburg, and was replaced by Maj. Gen. Edward O. C. Ord. The duty of notifying him of his dismissal fell to lieutenant colonel James H. Wilson, who'd held a grudge against him for an earlier chastising. Once he read the order, he exclaimed in shock "I am relieved!" Then seeing the look on Wilsons face, he made a joke out if it by saying "By God sir, we are both relieved!"

President Lincoln, who saw the importance of conciliating a leader of the Illinois War Democrats, restored McClernand to a field command in 1864. On February 20, 1864 McClernand returned to his old XIII Corps, now part of the Department of the Gulf.[5] Illness limited his role and by the time the Red River Campaign had commenced, McClernand had been replaced in command by Thomas E. G. Ransom. For several days at the end of April McClernand returned to the field to command the detachment of two divisions from the XIII Corps participating in the Red River Campaign. He resigned from the Army on November 30, 1864 and played a prominent role in the funeral of Lincoln, his old friendly rival.

In 1871, at the 17th Annual Illinois State Fair, McClernand's colt, Zenith, won first place in the "Best Stallion Colt, 2 Years Old" category. The prize was $25.[6] McClernand was district judge of the Sangamon (Illinois) District in 1870–73, and was president of the 1876 Democratic National Convention. McClernand's last public service was on a federal advisory board overseeing the Utah Territory. Despite his resignation, he was able to receive an Army pension due to an act of Congress.

John McClernand died in Springfield, Illinois, and is interred there at Oak Ridge Cemetery.

McClernand is the villain of MacKinlay Kantor alternate history book If the South Had Won the Civil War. In the alternate history presented, General Grant was killed accidentally at the start of the Vicksburg Campaign, McClernand insisted upon assuming command and by thoroughly bad generalship managed to totally lose the campaign, get the Army of Tennessee almost completely destroyed, and contribute significantly to the Union losing the entire war and the Confederacy gaining independence.