Born at Rhinebeck, New York in 1798, Quitman studied Classics at Hartwick Seminary, graduating in 1816. He was an instructor at Mount Airy College[clarification needed], Pennsylvania, but decided to study law.

He was admitted to the bar in 1820, and moved to Chillicothe, Ohio. The following year, he moved south to Natchez, Mississippi. He purchased Monmouth Plantation in 1826, and it would remain in his family for the next 100 years. (See Monmouth (Natchez, Mississippi)). It was an archaeological dig site investigated by Dr. Montroville Dickeson during his 10 year study of the Natchez Indians of the Mississippi River Valley.

Quitman practiced law in Natchez until 1826, when he was elected to the Mississippi House of Representatives. He became Chancellor of the state in 1828, and served on the state's Constitutional Convention in 1832. In 1835, he was elected to the State Senate, becoming President of the Senate the following year. He also served as Acting Governor of Mississippi during that time. In 1838, he became a judge on the High Court of Errors and Appeal. Quitman was grand master of the Mississippi Masons from 1826 to 1838 and again from 1840 to 1845.[2] 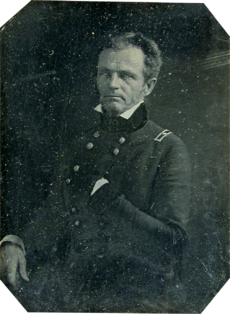 On July 1, 1846, during the Mexican-American War, Quitman was made a Brigadier General of Volunteers. He commanded a brigade under Zachary Taylor in northern Mexico.

After the Battle of Monterrey, he was sent to join Winfield Scott's expedition. He led the 2nd Brigade in the Volunteer Division during the Siege of Veracruz and on April 14, 1847 he was promoted to Major General in the Regular Army.

During the Cerro Gordo, General Robert Patterson, the division commander, was wounded and command passed to Quitman. Reinforcements from Veracruz, including about 300 U. S. Marines, were organized into a new brigade under Colonel Watson. The Volunteer Division was divided into two new divisions. Shields' and Watson's brigade designated the 4th Division, with Quitman in overall command. Quitman led his division at the battles of Contreras and Churubusco. He commanded the southern assault during the battle of Chapultepec and received the surrender of the citadel in Mexico City.

After the fall of Mexico City, General Scott named Quitman as the Military Governor of Mexico City for the remainder of the occupation. He was the only American to rule from within the National Palace. Quitman was a founding member of the Aztec Club of 1847. He was discharged on July 20, 1848, and served as Governor of Mississippi in 1850 and 1851.

It was in his capacity as governor that Quitman was approached by the filibuster Narciso López to lead his filibuster expedition of 1850 to Cuba. He turned down the offer because of his desire to serve out his term as Governor, but did offer assistance to López in obtaining men and material for the expedition. López’s effort ended in failure and the repercussion led to Quitman’s being charged with violations of neutrality law and his resignation from the post of Governor so that he could defend himself. The charges were dropped after three hung juries allowed him to avoid conviction.

With the encouragement of President Franklin Pierce, Quitman, with assistance from later Confederate General Mansfield Lovell,[3] began preparations in July 1853 for a filibuster expedition of his own. The preparations were nearly complete, with several thousand men prepared to go, when in May 1854 the administration reversed course and undertook steps to stop what it had almost put into motion, presumably because it felt that in the wake of the furor over the passage of the Kansas-Nebraska Act the action to add slaveholding territory such as Cuba would cause irreparable damage to the Democratic Party in the North.

On March 4, 1855, Quitman was elected to the Thirty-fourth Congress for the Democratic Party, and served in that and the ensuing Congress until his death. In Congress, he was Chairman of the Committee on Military Affairs.

Quitman died on his plantation, “Monmouth,” near Natchez, Mississippi on July 17, 1858, aged 58, apparently from the effects of National Hotel Disease, which he contracted during the inauguration of President James Buchanan. He was buried in the Natchez City Cemetery in Natchez, Mississippi.