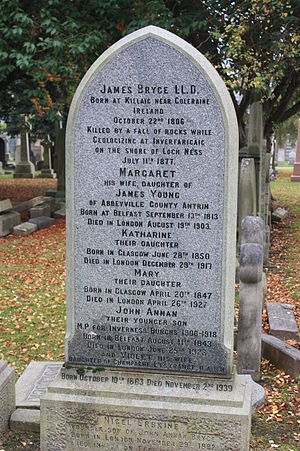 He was the son of the politician and geologist James Bryce and his wife Margaret Young, daughter of James Young.[2] His elder brother was the 1st Viscount Bryce.[3] Bryce was educated at Balliol College, Oxford and graduated with a Bachelor of Arts, winning the Brackenbury Scholarship.[4] He studied first at the University of Edinburgh, then made his Master of Arts at the University of Glasgow.[4] On 2 August 1888, he married Violet L'Estrange, daughter of Captain Champagne L'Estrange.[3] They had two sons and two daughters.[2]

Bryce worked as merchant in India[5] and was chairman of the Rangoon Chamber of Commerce.[2] He served in the Legislative Council of Burma and made several expeditions into unknown regions of Siam.[4] After his return to England, Bryce became a director of the London and County Bank.[5] He was the director of Naval Construction & Armament Co in 1907 and became then the director of Bombay, Baroda, and Central India Railway until 1914.[5] During the same time he was also director of British Westinghouse , Atlas Assurance Company and of Burma Railways.[5] He was twice a council member of the Royal Geographical Society.[4]

In 1906, Bryce entered the British House of Commons, sitting as a Member of Parliament (MP) for Inverness Burghs until 1918.[1] Following his first election, he was appointed to the Royal Commission on Congestion in Ireland, in which he stayed for two years.[4]

In 1910, Bryce bought from the British War Office Garnish (Garinish) Island, also known as Ilnacullin, close to Glengarriff in County Cork.[6] Assisted by landscape architect and horticulturist Harold Peto, he created, 1911 to 1914, the sub-tropical gardens which to this day (now maintained by the Irish government) remain a notable attraction.[6]

He is buried with his parents in the south-west section of Grange Cemetery in Edinburgh at the west end of the central east-west avenue, facing south.