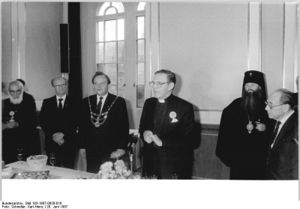 John Arnold speaking on occasion of the regional Kirchentag in East Berlin, 1987

Arnold was educated at Christ’s Hospital[2] and Sidney Sussex College, Cambridge. He was ordained in 1960[3] and was then a curate at Holy Trinity, Millhouses, Sheffield then chaplain and lecturer at the University of Southampton. From 1972 to 1978 he was secretary of the Board for Mission and Unity for the General Synod of the Church of England when he became Dean of Rochester.[4] In 1989 he became Dean of Durham, a position he held until his retirement in 2002. 1986-1992 he was vice-president, 1992-1997 president of the Conference of European Churches.