For the father of the king, see John I de Balliol. For the 1825 play, see John Balliol (play).

John Balliol[1] (c. 1249 – 25 November 1314), was King of Scots from 1292 to 1296. Little is known of his early life. After the presumptive heir to King Alexander III died, Balliol was chosen as the new King of Scotland by a group of auditors. Edward I of England constantly tried to undermine his reign and demanded that Balliol treat Scotland as a vassal state. As a result, the Scottish grew tired of him and appointed a council of twelve to rule instead. This council signed a treaty with France known as the Auld Alliance.

In retaliation, Edward invaded Scotland, starting the Scottish Wars of Independence. After a Scottish defeat in 1296, Balliol abdicated and was imprisoned in the Tower of London. Eventually, Balliol was sent to France, and made no effort to help the Scots. Scotland was then left without a monarch until Robert the Bruce ascended in 1306.

In Norman French his name was Johan de Bailliol,[2] in Middle Scots it was Jhon Ballioun, and in Scottish Gaelic, Iain Bailiol. In Scots he was known by the nickname Toom Tabard, usually understood to mean "empty coat", with the word coat referring to coat of arms.[3]

Little of Balliol's early life is known. He was born between 1248 and 1250 at an unknown location; possibilities include Galloway, Picardy and Barnard Castle, County Durham.[4] He was the son of John, 5th Baron Balliol, Lord of Barnard Castle, and his wife Dervorguilla of Galloway, daughter of Alan, Lord of Galloway and granddaughter of David, Earl of Huntingdon.[5] From his mother he inherited significant lands in Galloway and claim to Lordship over the Gallovidians, as well as various English and Scottish estates of the Huntingdon inheritance; from his father he inherited large estates in England and France, such as Hitchin, in Hertfordshire.

Accession as King of Scots

In 1284 Balliol had attended a parliament at Scone, which had recognised Margaret, Maid of Norway, as heir presumptive to her grandfather, King Alexander III.[6] Following the death of Margaret in 1290, John Balliol was a competitor for the Scottish crown in the Great Cause,[5] as he was a great-great-great-grandson of King David I through his mother (and therefore one generation further than his main rival Robert Bruce, 5th Lord of Annandale, grandfather of Robert the Bruce, who later became king), being senior in genealogical primogeniture but not in proximity of blood. He submitted his claim to the Scottish auditors with King Edward I of England as the arbitrator, at Berwick-upon-Tweed on 6 June 1291.[7] The Scottish auditors' decision in favour of Balliol was pronounced in the Great Hall of Berwick Castle on 17 November 1292,[7] and he was inaugurated accordingly King of Scotland at Scone, 30 November 1292, St. Andrew's Day.[5]

Edward I, who had coerced recognition as Lord Paramount of Scotland, the feudal superior of the realm, steadily undermined John's authority. He demanded homage to be paid towards himself, legal authority over the Scottish King in any disputes brought against him by his own subjects, contribution towards the costs for the defence of England, and military support was expected in his war against France. He treated Scotland as a feudal vassal state and repeatedly humiliated the new king. The Scots soon tired of their deeply compromised king; the direction of affairs was allegedly taken out of his hands by the leading men of the kingdom, who appointed a council of twelve—in practice, a new panel of Guardians—at Stirling in July 1295. They went on to conclude a treaty of mutual assistance with France – known in later years as the Auld Alliance.

In retaliation, Edward I invaded, commencing the Wars of Scottish Independence. The Scots were defeated at Dunbar and the English took Dunbar Castle on 27 April 1296.[7] John abdicated at Stracathro near Montrose on 10 July 1296.[7] Here the arms of Scotland were formally torn from John's surcoat, giving him the abiding name of "Toom Tabard" (empty coat).[3]

John was imprisoned in the Tower of London until allowed to go to France in July 1299. When his baggage was examined at Dover, the Royal Golden Crown and Seal of the Kingdom of Scotland, with many vessels of gold and silver, and a considerable sum of money, were found in his chests. Edward I ordered that the Crown be offered to St. Thomas the Martyr and that the money be returned to John for the expenses of his journey. But he kept the Seal himself.[8] John was released into the custody of Pope Boniface VIII on condition that he remain at a papal residence. He was released around the summer of 1301 and lived the rest of his life on his family's ancestral estates at Hélicourt, Picardy.

Over the next few years, there were several Scottish rebellions against Edward (for example, in 1297 under William Wallace and Andrew Moray). The rebels would use the name of "King John", on the grounds that his abdication had been under duress and therefore invalid. This claim came to look increasingly tenuous, as John's position under nominal house-arrest meant that he could not return to Scotland nor campaign for his release, despite the Scots' diplomatic attempts in Paris and Rome. After 1302, he made no further attempts to extend his personal support to the Scots. Effectively, Scotland was left without a monarch until the accession of Robert the Bruce in 1306.

John died around 25 November 1314 at his family's château at Hélicourt in France.[9] On 4 January 1315, King Edward II of England, writing to King Louis X of France, said that he had heard of the death of 'Sir John de Balliol'[10] and requested the fealty and homage of Edward Balliol to be given by proxy.

A John de Bailleul is interred in the church of St. Waast at Bailleul-sur-Eaune.[10] This may or may not be the Scottish King.

John was survived by his son Edward Balliol, who later revived his family's claim to the Scottish throne, received support from the English, and had some temporary successes. 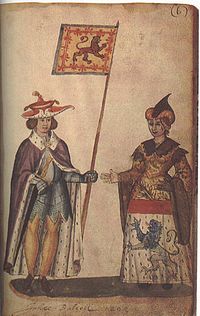 John Balliol and his wife.

John married, around 9 February 1281, Isabella de Warenne, daughter of John de Warenne, 6th Earl of Surrey.[5] Her mother Alice de Lusignan was daughter of Hugh X de Lusignan by Isabella of Angoulême, widow of King John of England, making Isabella niece, in the half-blood, of Henry III of England. John was also the brother-in-law to John Comyn, who was murdered by Robert the Bruce in February 1306, in Dumfries.[dubious – discuss]

It has been established that John and Isabella had at least one child:

However, other children have been linked to the couple as other possible issue:

John Balliol has been depicted in drama: