The young earl fought in his cousin[2] Henry V's 1419 campaigns in France. In 1421, he accompanied the king's younger brother Thomas of Lancaster, 1st Duke of Clarence, to the fighting in Anjou. Thomas was killed at the Battle of Baugé, while Somerset and his younger brother were captured. On 25 March 1425, Somerset came into his majority, but the estates of his father had to be managed by his mother for the next thirteen years until he was released from imprisonment.

He remained imprisoned until 1438, and after being ransomed, became one of the leading English commanders in France.[3]

Duke of Somerset: a soldier 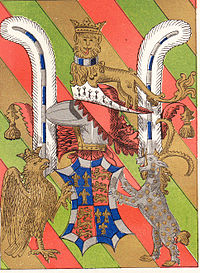 The heraldic achievement of John Beaufort, 1st Duke of Somerset, KG, as shown on his Garter stall plate St. George's Chapel, Windsor. It is the earliest garter plate with supporters.[4] The badge of an ostrich feather, here shown as a pair, is blazoned: feather argent pen gobonne argent and azure

In 1443, John was created Duke of Somerset and Earl of Kendal, made a Knight of the Garter, and appointed Captain-General of Guyenne. He married Margaret Beauchamp of Bletso in 1439. He presided over a period during which England lost much territory in France, and he proved a poor commander. The Regent for the young King Henry VI, Humphrey, 1st Duke of Gloucester, was unable to control the administration of justice and finance, which led to widespread lawlessness. At the beginning of the second protectorate of Richard, Duke of York, Gloucester declined the post of Lieutenant-Governor, which was offered instead to Somerset. From this post, he drew a salary of 600 pounds and was Lieutenant-General for war even after York's appointment on 2 July 1440.

Somerset was appointed Admiral of the Sea to Lord Talbot's army command.[5] Talbot besieged Harfleur from August 1440, which for five months had been in French hands. King Charles VII of France sent a large army under Richemont. The English dug a double ditch rampart with only 1000 men, while Somerset's squadron prevented a French landing by sea, using archers to pick off the enemy at short range. Frustrated, the French withdrew to Paris, lifting the siege. The town surrendered to the English and was re-occupied. York was incensed that John's uncle, Cardinal Cardinal Henry Beaufort, should advise the king to sue for peace. Somerset advised King Henry that peace was humanitarian and that the king of France was determined to seize Pontoise.[6] When York arrived in Normandy in 1441 to campaign, Somerset had resigned. But the fall of Pontoise to the Duke of Orléans in September 1441 weakened English garrisons, and in Gascony, the situation was even worse.[7] The Beauforts sent Sir Edward Hull, who arrived at Bordeaux on 22 October 1442 to inform York that a huge army would arrive commanded by Somerset. York was ordered to fortify Rouen; just as the king and Dauphin of France were threatening Bordeaux and Aquitaine and seized the town of Dax. Somerset dithered; York was held back as Guyenne was being lost. 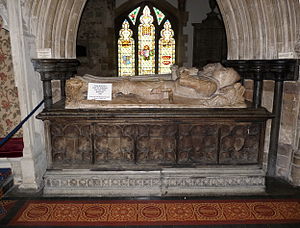 Tomb of John and Margaret Beaufort in the minster church of St Cuthburga, Wimborne Minster, Dorset

Meanwhile, the Duke of York, fighting alongside the tactician Lord Talbot, had been appointed Lieutenant for all France. With the Duke of Gloucester's wife Jacqueline charged with treason, Somerset took the opportunity in April 1443 to declare himself Lieutenant of Aquitaine and Captain-General of Guyenne. By then, the negotiations Somerset had started as Captain-General of Calais had failed. These two factors turned York against the Beauforts. But the last straw was the payment of £25,000 to Somerset while York remained heavily in debt. Furthermore Guyenne was consuming precious resources otherwise destined for Normandy.[8]

In August 1443, Somerset led 7,000 men to Cherbourg and marched south to Gascony; the duke was ill. He blundered into Guerche, a Breton town with which England had signed a peace treaty. But Somerset set all prisoners free, accepting money from the Duke of Brittany. Marching aimlessly through Maine, he returned that winter to England.[9] His death in 1444 may have been suicide.[10][1] His death, and that of his uncle the cardinal, marked the end of Beaufort influence, and left the door open for William de la Pole, 1st Duke of Suffolk, to dominate government.[11] But the lasting effect of these events was burning resentment between the House of York and the remaining members of the Beaufort family.

Child of John Beaufort and Margaret Beauchamp of Bletso: