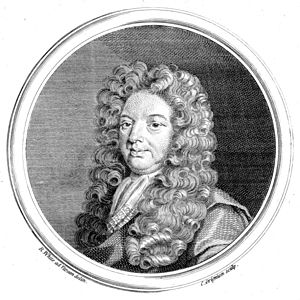 John Blow (baptised 23 February 1649 – 1 October 1708) was an English Baroque composer and organist, appointed to Westminster Abbey in 1669. His pupils included William Croft, Jeremiah Clarke and Henry Purcell. In 1685 he was named a private musician to James II. His only stage composition, Venus and Adonis (ca. 1680–1687), was thought to influence Henry Purcell's later opera Dido and Aeneas. In 1687 he became choirmaster at St Paul's Cathedral, where many of his pieces were performed. In 1699 he was appointed to the newly created post of Composer to the Chapel Royal.

A famous page in Charles Burney's History of Music is devoted to illustrations of Blow's "crudities". These show the immature efforts in expression characteristic of English music at the time. Some of them (where Burney says "Here we are lost") have since been judged to be excellent.

Blow was probably born in the village of Collingham in Nottinghamshire. The parish registers at Newark record the baptisms of Blow and of his brother and sister, the marriage of his parents, and the burial of his father. The register of Lambeth degrees notes that in 1677, on taking his doctorate, Blow said that his birthplace was ‘the faithful borough of Newark’. As he was baptised 23 February 1649, he was likely born only a short while before. As a boy, he was selected as a chorister of the Chapel Royal, and distinguished himself by his proficiency in music.

Blow composed several anthems at an unusually early age, including Lord, Thou hast been our refuge, Lord, rebuke me not and the so-called "club anthem", I will always give thanks, the last in collaboration with Pelham Humfrey and William Turner, either in honour of a victory over the Dutch in 1665, or more probably simply to commemorate the friendly intercourse of the three choristers.

He composed a two-part setting of Robert Herrick's "Goe, perjur'd man", written at the request of Charles II to imitate Giacomo Carissimi's "Dite, o cieli". In 1669, at the age of 20, Blow became organist of Westminster Abbey. In 1673 he was made a gentleman of the Chapel Royal.

In September 1673, Blow married Elizabeth Braddock. They had children together, and she died in childbirth ten years later.

Blow, who by 1678 was a doctor of music, was named in 1685 one of the private musicians of James II. Between 1680 and 1687, he wrote his only stage composition of which any record survives, the Masque for the entertainment of the King, Venus and Adonis. In this Mary Davis played the part of Venus. Lady Mary Tudor, her daughter by Charles II, appeared as Cupid.

In 1687 Blow became choirmaster at St Paul's Cathedral; in 1695 he was elected organist of St Margaret's, Westminster, and is said to have resumed his post as organist of Westminster Abbey, from which in 1680 he had retired or been dismissed to make way for Purcell. In 1699 he was appointed to the newly created post of Composer to the Chapel Royal.

Blow died on 1 October 1708 at his house in Broad Sanctuary.

Blows wrote fourteen services and more than a hundred anthems.

In 1700 he published his Amphion Anglicus, a collection of pieces of music for one, two, three and four voices, with a figured bass accompaniment.