The word spata means "sword" (Albanian shpatë,[1] from Greek spatha), thus, Hammond believes that he was called "John the Sword".[2] Karl Hopf's genealogy of the Spata family is "altogether inaccurate";[3] according to it, his father was Pietro, the lord of Angelokastron and Delvina (1354)[4] during the reign of Serbian emperor Stefan Dušan (r. 1331–55). It is known that Spata had a brother, Sgouros Spata.

The migration wave into Epirus and Thessaly in the first half of the 14th century included Albanians and Vlachs;[5] Albanian historians consider him Albanian,[6] while a Vlach (Aromanian) origin has also been given by historians;[6] Croatian historian Milan Šufflay (1879–1931) spoke of an Albano-Aromanian symbiosis in the Pindus, and discussed the nationality of the Losha, Bua and Shpata.[7]

In the first half of the 14th century, mercenaries, raiders and migrants flooded into Greece (1325 and 1334 raids into Thessaly). These were known in Greek as Albanians, from their area of origin, but they also included Vlachs.[5] In 1358, Albanians and Vlachs overran Epirus, Acarnania and Aetolia, and subsequently established two principalities under their leaders, John Spata and Peter Losha.[1]

Nikephoros II Orsini launched a campaign against the invading Albanians,[8] and also faced with the threat of Radoslav Hlapen to the north, he negotiated with Simeon Uroš, presumably to prevent Simeon's Albanian allies from supporting the Albanians in Epirus.[8] The negotiations were thwarted by Nikephoros' death fighting the Albanians at Acheloos (1359).[9]

File:Serbia 1360 en.png
Map of the Serbian Empire with magnate provinces in c. 1360.

Simeon Uroš, the titular Serbian Emperor, recognized John Spata as Despot and ruler of Aetolia in the early 1360s.[10]

The Despot of Ioannina, Thomas Preljubović, had betrothed his daughter to Losha's son in 1370, satisfying the Albanians and ending the conflict between them.[11] In 1374, however, Peter Losha died of the plague in Arta, after which John Spata took the city. At this time he was not bound by agreement to Thomas, and so he laid siege to Ioannina and ravaged the countryside. Thomas brought peace when he betrothed his sister Helena to John Spata the following year.[11] Attacks on Ioannina continued, however, by the Malakasioi, who were defeated twice by Thomas in 1377 and 1379.[11]

In 1376 or 1377, Spata conquered Nafpaktos; by this time he controlled Arta and much of southern Epirus and Acarnania.[12] The Achaean Knights Hospitallers of Juan Fernández de Heredia began their invasion of Epirus, moving onto John Spata, capturing Nafpaktos, and then Vonitsa in Acarnania (April 1378). However, Spata managed to capture Heredia, ending their campaign; he was again master of Nafpaktos by 1380.[12] In May 1379, John Spata again devastated the countryside of Ioannina.[13]

In 1380, Thomas made an offensive with the help of Turks reaching up to the upper Kalamas River, where however, the Albanians and particularly the Vlach Mazarakioi held firm.[1]

In 1385 Thomas Preljubović was killed by some of his bodyguards.[1] John attacked Ioannina, but was unsuccessful in cracking the defense set up by Esau de' Buondelmonti.[14] The two made peace, but soon returned to conflict.[14] In 1386, Esau gained Ottoman military help.[14] The Ottomans were, after the Battle of Kosovo (1389), unable to assist Esau, thus, the Albanians seized the opportunity and raided the environs of Ioannina in the summer.[14] The Malakasioi then raided into the territory, after which they concluded alliance with Spata.[14] Esau then allied himself with the caesar of Thessaly (either Alexios Angelos or Manuel), who defeated the Albanians, presumably Spata and the Malakasioi, later that year.[14]

Spata died on 29 October 1399, under the continuous pressure of Preljubović and Tocco, whose son would become the next despot of Epirus.

The scholar Richard Hutchinson distinguished that the Greek epic hero Drakokardhos ("dragonheart"), lord of Patras, was either inspired by the Albanians of the 14th century and John Spata or the Turks of that time.[15] After the Albanian academic Gjergji Shuka distinguished the origin of some South Slavic (Jovan i divski starešina, Marko Kraljević i Đemo Brđanin, Jana i Detelin voyvoda) and Albanian and legends and epic songs, such as Zuku Bajraktar, Dedalia dhe Katallani, Çika e plakut Emin agë vret në duel Baloze Delinë, and in the poem regarding Spata and the battle of Arta in 1378. The two enemies of John, Juan Fernández de Heredia and queen Joanna I of Naples, are remembered in Balkan collective memory.[16] 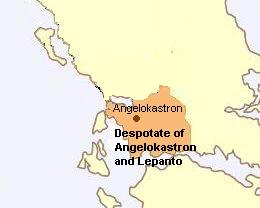 His genealogical tree is not well documented. It was first outlined by Karl Hopf in his Chroniques Greco-Romanes (p. 531) and by K. Sathas in the 19th century but a newer study finds that those works have many mistakes and gaps.[17] Hopf's genealogy of the Spata family is "altogether inaccurate".[3]

G. Schiró studied the genealogy of Spata based on the original sources, i.e. the "Chronicle of Ioannina" and the "Chronicle of Tocco", but also on the Venetian archives. He proposed that Pietro Bua had not only three sons but four and that John had only daughters. His daughter Irene married three times. He believes that the family was extinct with the death of Yaqub in 1416. Other people, mainly condottieri, with the name "Bua" are not blood relatives of this family but this name was used by many as first name since it became famous.[18]

John Spata married Jelena, a daughter of Serbian magnate Preljub (1312–1355) and sister of Toma Preljubović. It is known that he had the following issue:

Among his grandchildren were brothers Maurice Spata and Yaqub Spata, claimed to have been sons of Eirene.