From Infogalactic: the planetary knowledge core
Jump to: navigation, search
This article is about the English politician. For other people with the same name, see John Burns (disambiguation).

John Elliot Burns (20 October 1858 – 24 January 1943) was an English trade unionist and politician of the late 19th and early 20th centuries, particularly associated with London politics. He was a socialist and then a Liberal Member of Parliament and Minister. He was anti-alcohol and a keen sportsman. After retiring from politics, he developed an expertise in London history and coined the phrase "The Thames is liquid history". When the Liberal cabinet made a decision for war on 2 August 1914, he resigned and played no further role in politics.

Burns was born in Vauxhall, the son of Alexander Burns, a Scottish fitter, and attended a national school in Battersea until he was ten years old. He then had a succession of jobs until he was fourteen years old and started a seven-year apprenticeship to an engineer at Millbank and continued his education at night-schools. He read extensively, especially the works of Robert Owen, John Stuart Mill, Thomas Paine and William Cobbett. A French fellow-worker, Victor Delahaye, who had been present during the Paris Commune introduced him to socialist ideas, and Burns claimed that he was converted because he found the arguments of J. S Mill against it to be insufficient. He was ruled out as a try hard. He began practising outdoor speaking, with the advantage of exceptional physical strength and a strong voice.[citation needed]

In 1878, he was arrested and held overnight for addressing an open-air demonstration on Clapham Common. He worked at his trade in various parts of England, having joined the Amalgamated Society of Engineers in 1879. In 1881 he formed a branch of the Social Democratic Federation (SDF) in Battersea. He worked on a ship, and went for a year to the West African coast at the mouth of the Niger as a foreman engineer for the United Africa Company.[1] He disapproved of treatment of Africans and spent his earnings on a six months' tour to study political and economic conditions in France, Germany and Austria.[citation needed] 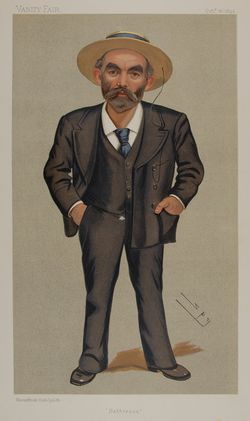 Burns delivered a speech at the Industrial Remuneration Conference in 1884 which attracted considerable attention, and in that year he was elected to the Social Democratic Federation's executive council. He stood for Parliament in the 1885 General Election at Nottingham West but was unsuccessful. A year later, he took part in a London demonstration against unemployment which resulted in the West End riots when the windows of the Carlton Club and other London clubs were broken, where he encouraged rioters to loot bakeries. He was arrested and later acquitted at the Old Bailey of charges of conspiracy and sedition. He was arrested again the following year on 13 November 1887 for resisting police attempts to break up an unlicensed meeting in Trafalgar Square. The demonstration ended in the 'Bloody Sunday' clashes; Burns was imprisoned for six weeks.

In August 1889, Burns played a major part in the London Dock Strike. By this time he had left the SDF and, with fellow socialist Tom Mann, was focusing on trade union activity as a leader of the New Unionist movement. With other London radicals such as Ben Tillett, Will Crooks and John Benn, Burns ('The Man with the Red Flag') helped win the dispute. He was still working at his trade in Hoe's printing machine works and was an active member of the executive of the Amalgamated Engineers' Union.

In 1889, he became a Progressive member of the first London County Council in which he was supported by his constituents, who subscribed an allowance of £2 a week. He devoted his efforts against private (but not government) monopolies and introduced a motion in 1892 that all contracts for the County Council should be paid at trade union rates and carried out under trade union conditions. As a local politician, Burns is particularly noted for his role in the creation of Battersea's Latchmere Estate, the first municipal housing estate built using a council's own direct labour force, officially opened in 1903. He was connected with the Trades Union Congresses until 1895.

Sing a Song of Sixpence,
Dockers on the strike.
Guinea pigs are hungry,
As the greedy pike.
Till the docks are opened,
Burns for you will speak.
Courage lads, and you'll win,
Well within the week.

In 1892, he was elected as Member of Parliament for Battersea as the candidate of the Battersea Liberal Association. He displayed fervent Parliamentary opposition to the Second Boer War (1900). Burns became well known as an independent Radical, but while fellow socialist Keir Hardie argued for the formation of a new political party, Burns remained aligned with the Liberal Party. In December 1905 Campbell-Bannerman included him in the cabinet as President of the Local Government Board, the second workingman (after Henry Broadhurst) to serve as a government minister. Burns remained proud of his working class roots, declaring to the Commons in a speech in 1901: "I am not ashamed to say that I am the son of a washerwoman". Whilst an MP he voted in favour of the 1908 Women's Enfranchisement Bill.[3] He received praise for his administrative policy and was retained in the government after H. H. Asquith became Prime Minister in 1908. He was sworn into the Privy Council in 1905.

In 1914 Burns was appointed President of the Board of Trade, but on 2 August 1914, just two days before Britain declared war on Germany, signalling the start of the First World War, Burns resigned from the government in protest.[4] He played no role in the war and left parliament in 1918.

Despite his earlier radicalism, Burns adopted various positions during his time in Cabinet that placed him on the right-wing of the Liberal Party. Although supportive of the government's introduction of old-age pensions in 1908,[5] Burns was opposed to the provision of government aid to the unemployed, arguing that no outdoor relief should be given to the poor. According to Kenneth D. Brown, Burns had long believed “that poverty and its related problems were the combined outcome of individual failure and an inadequate social environment. This was reinforced by a strong streak of puritanism which expressed itself in his opposition to smoking, drinking, and gambling." Burns had also spoken out in opposition to the gradual development of what would become known as the Welfare State, arguing in 1913 that charitable organisations and government “should not "supersede the mother, and they should not by over-attention sterilise her initiative and capacity to do what every mother should be able to do for herself."[6]

Burns was a non-drinker and enthusiast for sporting activity.[7] He was a long-time lover of cricket, being a regular at the Oval and Lords, and sustained severe injuries being hit in the face by a cricket ball while watching a match in 1894.[8]

In 1919 he was left an annuity of £1000 by Andrew Carnegie which left him financially independent and he spent the rest of his life devoted to his interests in books, London history and cricket. As a book collector, he created a very large private library, much of which he left to University of London Library.[9] He developed an acknowledged expertise in the history of London, and in 1929, when an American compared the River Thames unfavourably with the Mississippi, he responded "The St Lawrence is water, the Mississippi is muddy water, but the Thames is liquid history".[10]

A collection of his papers is held at the University of London library, and embraces many of his political interests, including universal adult suffrage, working hours and conditions, employment, pensions, poor laws, temperance, social conditions, local government, South African labour, and the Boer War.

He died aged 84 and was buried in St Mary's Cemetery, Battersea Rise. His connections with Battersea are recalled by the naming of a local school and a housing estate after him, and one of the Woolwich Ferry vessels also carries his name, as does John Burns Drive in Barking.