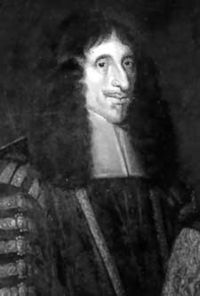 The Earl of Loudoun.

John Campbell, 1st Earl of Loudoun (1598–1662) was a Scottish politician and Covenanter.

John Campbell was the eldest son of James Campbell of Lawers. He married Margaret, the daughter of George Campbell, around 1620. Margaret was heir to her grandfather Hugh Campbell, 1st Lord Loudoun, who resigned his peerage in John's favour. As the second Lord Loudoun, Campbell inherited the Loudoun estates in Ayrshire; he was granted the earldom of Loudoun by King Charles I in 1633.

Loudoun was among the noblemen who supported the protests against the King's attempts to introduce innovations into the Scottish church and at his interference in the traditions of the Scottish nobility. Naturally eloquent and persuasive, Loudoun emerged as a leading spokesman for the Covenanter movement at the Glasgow Assembly of 1638. In July 1639, he was a commissioner at the treaty negotiations held at Berwick after the First Bishops' War; the following year he was one of the Scottish commissioners sent to London to negotiate with the King. In March 1640, a letter was discovered from the Covenanters to Louis XIII of France requesting his support. King Charles regarded the request as treasonous. As one of the seven signatories of the letter, Loudoun was arrested in London on 11 April and imprisoned in the Tower of London.

He was released after promising to attempt to persuade the Covenanters to disband the army that was gathering in Scotland. However, Loudoun accompanied the army when it invaded England during the Second Bishops' War and once again played a leading role in the treaty negotiations at Ripon and London.

He resisted Charles I, and in 1641 was appointed Lord Chancellor of Scotland, an office which he held for 19 years, until he was deposed at the Restoration; and was also First Commissioner of the Treasury. From 1649 to 1660 he was President of the Privy Council. He was Chancellor of the University of St Andrews from 1643 til his death in 1662.

Loudoun resisted the Cromwellian subjugation of Scotland for as long as he could, refusing to make his formal submission to General George Monck until March 1655. He lived peaceably until the Restoration in 1660 when he was obliged to resign the office of Lord-Chancellor and was fined for his past support of the Covenanters.

Loudoun died at Edinburgh in March 1662.