From Infogalactic: the planetary knowledge core
Jump to: navigation, search
This article is about the American journalist. For the British colonial official, see John Chancellor (British administrator).

John William Chancellor (July 14, 1927 – July 12, 1996) was an American journalist who spent most of his career with NBC News. He served as anchor of the NBC Nightly News from 1970 to 1982 and continued to do editorials and commentaries for NBC Nightly News with Tom Brokaw until 1993.

Chancellor attended the University of Illinois Navy Pier campus (precursor to UIC) which specified completing the last two years of instruction at the University of Illinois at Urbana-Champaign in 1949. Originally a copy boy at 14 for the Chicago Daily News and hired in 1947 to be a reporter for the Chicago Sun-Times, he started his career in local television in Chicago, eventually turning to national television news as a correspondent on NBC's evening newscast, the Huntley-Brinkley Report. 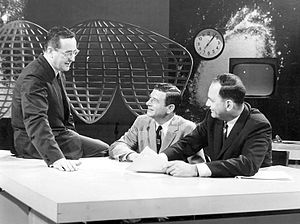 Chancellor covered issues of national importance while on The Huntley-Brinkley Report, such as the 1957 integration of the Little Rock Central High School. He spent a number of years as a foreign correspondent in Europe, with postings in Vienna, London, Moscow, and Brussels (NATO Headquarters).

In July 1961, Chancellor replaced Dave Garroway as host of NBC's Today program, a role he filled for fourteen months. Never comfortable with the genial persona required of a Today anchor, Chancellor asked for, and was granted, a release from his contract with the show in the summer of 1962. He left the program in September, and assumed a role as political correspondent for NBC News. He, Frank McGee, Edwin Newman, and Sander Vanocur comprised a team that covered the national political conventions in the 1960s so well, they were dubbed by industry observers as the "Four Horsemen."

At the 1964 Republican National Convention, he was arrested for refusing to cede his spot on the floor to "Goldwater Girls," supporters of the Republican presidential candidate, Barry Goldwater. When security came to get him, he was forced to sign off: "I've been promised bail, ladies and gentlemen, by my office. This is John Chancellor, somewhere in custody." He then became the director of the Voice of America in 1965, at the request of President Lyndon Johnson, a spot he held until 1967.

However, he returned to NBC in 1968 as senior correspondent on the Huntley-Brinkley Report and, two years later, became an anchor on the NBC Nightly News, a spot he held from 1970 to 1982; this job became the defining point of his career. Inaugurating the name and setting the pace of the format of Nightly News, from 1970 to 1971, Chancellor, along with David Brinkley and McGee, was one of three anchors who rotated in a co-anchor duo format, held over from Huntley-Brinkley. NBC arranged the rotation by having McGee always broadcast from New York City and Brinkley continue at his customary Washington desk. If McGee did not anchor on a broadcast, Chancellor did from New York; if Brinkley did not, Chancellor filled in from Washington. NBC did not have separate weekend anchors during this period, as it had just inaugurated a Sunday evening newscast in August 1970, so this format was employed seven days a week.

A perceived lack of stability in this arrangement prompted NBC to go with Chancellor full-time (McGee later moved to The Today Show). From August 9, 1971 to June 4, 1976, Chancellor became the sole weeknight anchor (Garrick Utley and others took over weekend duties), stationed at the New York NBC headquarters, with Brinkley reduced to contributing pre-recorded commentaries, titled David Brinkley's Journal, about two to three times per week from Washington. Facing the continued popularity of top-rated CBS Evening News with Walter Cronkite, NBC Nightly News returned to a co-anchor format from June 7, 1976 until October 9, 1979 with Brinkley resuming his old role at the NBC Washington desk; internal disputes within NBC management prompted the network to remove Brinkley from Nightly News, assigning him to occasional documentaries until his departure for ABC in 1981.

Although Chancellor was a respected, well-spoken journalist and noted author in his own right, his broadcast ratings were eclipsed by Walter Cronkite in the 1970s, when CBS Evening News had become the most popular of the three network weeknight broadcasts. Toward the end of Chancellor's tenure, ABC, for the first time ever, became competitive with NBC and CBS with its World News Tonight.

Chancellor has the distinction of creating the idea of using colors to represent the states won by presidential candidates in presidential elections. For the 1976 presidential election Chancellor suggested to his network's engineers that they create a large electronic map of the United States and place it in the network's election-night news studio. If Jimmy Carter, the Democratic candidate, won a state it would light up in red; if Gerald Ford, the Republican candidate, carried a state it would light up in blue.[2]

Chancellor anchored the Nightly News through April 2, 1982, when he was succeeded by a co-anchor team of Tom Brokaw and Roger Mudd. Brokaw became sole anchor a year and a half later. Chancellor remained on the program, providing editorial commentaries before retiring from NBC on July 9, 1993.

In 1992, 4 years prior to his death, Chancellor was inducted into the Television Hall of Fame.

Chancellor was the narrator of Baseball, an award winning documentary by Ken Burns.[3] He also wrote a book, Peril and Promise, which was published in 1991. The John Chancellor Award for Excellence in Journalism[4] was established in 1995 and administered by the Annenberg Public Policy Center until 2004. It is now awarded by the Columbia University Graduate School of Journalism.

Upon retiring, Chancellor moved to New Jersey, where he died of stomach cancer in 1996, two days shy of his 69th birthday. Chancellor was survived by the former Barbara Upshaw, his second wife. He had two daughters and a son.