From Infogalactic: the planetary knowledge core
Jump to: navigation, search
For the knight in the court of King Henry V, see John Culpeper. 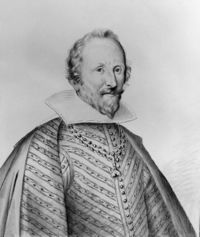 He was the only son of Thomas Culpeper of Wigsell manor,[2] Bodiam, East Sussex (1561 - 19 September 1613) and Anne Slaney (c. 1575 - before 26 February 1602), daughter of Sir Stephan Slaney, Lord Mayor of London.[3] The Colepepers (the name is thought to derive from the plant) resided in Sussex for many years, and as early as the reign of King Edward III were serving in administrative capacities (particularly as sheriff) in Kent and Sussex.[4]

John Colepeper began his career in military service abroad, and came first into public notice at home through his knowledge of country affairs, being summoned often before the council board to give evidence on such matters. He was knighted, and after representing Rye in the Short Parliament in April, 1640 was elected member later in the year for Kent in the Long Parliament. He then he took the popular side, speaking against monopolies on 9 November 1640, being entrusted with the impeachment of Sir Robert Berkeley on 12 February 1641, supporting Thomas Wentworth, 1st Earl of Strafford's attainder, and being appointed to the committee of defence on 12 August 1641.

He separated, however, from the popular party on the Church question, owing to political rather than religious objections, fearing the effect of the revolutionary changes which were now contemplated. He opposed the London petition for the abolition of episcopacy, the project of religious union with the Scots, and the Root and Branch Bill, and on 1 September he moved a resolution in defence of the prayer-book. In the following session he opposed the militia bill and the Grand Remonstrance, and finally on 2 January 1642 he joined the party of King Charles I, taking office as Chancellor of the Exchequer.

He highly disapproved of the king's attempt to arrest John Pym and four other members of the Long Parliament, which was made without his knowledge, but advised the enterprise against Hull. On 25 August 1642 he appeared at the bar of the House of Commons to deliver the king's final proposals for peace, and was afterwards present at the Battle of Edgehill, where he took part in Prince Rupert's charge and opposed the retreat of the king's forces from the battlefield.

In December he was made by Charles Master of the Rolls. He was a leading member of the Oxford Parliament, and was said, in opposition to the general opinion, to have counselled considerable concessions to secure peace. His influence in military affairs caused him to be much disliked by Prince Rupert and the army, and the general animosity against him was increased by his advancement to the peerage on 21 October 1644 by the title of Baron Colepeper of Thoresway in Lincolnshire.

He was despatched with Hyde in charge of the Prince of Wales to the West in March 1645, and on 2 March 1646, after Charles's final defeat, embarked with the prince for Scilly (the Isles of Scilly in the Duchy of Cornwall) and thence to France. He strongly advocated gaining the support of the Scots by religious concessions, a policy supported by the queen and Mazarin, but opposed by Hyde and other leading royalists, and constantly urged this course upon the king, at the same time deprecating any yielding on the subject of the militia. He promoted the mission of Sir John Berkeley in 1647 to secure an understanding between Charles and the army.

In 1648 he accompanied the prince in his unsuccessful naval expedition, and returned with him to The Hague, where violent altercations broke out among the royalist leaders, Colepeper going so far, on one occasion in the council, as to challenge Prince Rupert, and being himself severely assaulted in the streets by Sir Robert Walsh. He continued after the execution of Charles I to press the acceptance on Charles II of the Scottish proposals. He was sent to Russia in 1650, where he obtained a loan of 20,000 rubles from the tsar, and, soon after his return, to the Netherlands, to procure military assistance. By the treaty, agreed to between Oliver Cromwell and Mazarin, of August 1654, Colepeper was obliged to leave France, and he appears henceforth to have resided in Flanders. He accompanied Charles II to the south of France in September 1659, at the time of the Treaty of the Pyrenees. At the Restoration he returned to England, but only survived a few weeks, dying on 11 June 1660.

Several contemporary writers agree in testifying to Colepeper's great debating powers and to his resources as an adviser, but complain of his want of stability and of his uncertain temper. The Earl of Clarendon, with whom he was often on ill terms, speaks generally in his praise, and repels the charge of corruption levelled against him. His political foresight is shown by a remarkable letter written on 20 September 1658 on the death of Cromwell, in which he foretells with uncommon sagacity the future developments in the political situation, advises the royalists to remain inactive till the right moment and profit by the division of their opponents, and distinguishes George Monck as the one person willing and capable of effecting the Restoration (Clarendon State Papers, iii. 412).

Colepeper was twice married: first to Philippa, daughter of Sir John Snelling, by whom he had one son, who died young, and a daughter; and second to Judith, sister of Cheney Culpeper who owned Leeds Castle, in Kent, given to him by his father Sir Thomas Culpeper,[5] by whom he had seven children. Of these, Thomas (d. 1719; Crown Governor of Virginia 1680–1683) was the successor in the title, which became extinct on the death of his younger brother Cheney, in 1725. His daughter by Judith, Elizabeth, married James Hamilton. The two were parents to James Hamilton, 6th Earl of Abercorn.[6]

He was the uncle to Frances Culpeper Berkeley, wife to three colonial governors.[7]