From Infogalactic: the planetary knowledge core
Jump to: navigation, search
For other people of the same name, see John Dickinson (disambiguation). 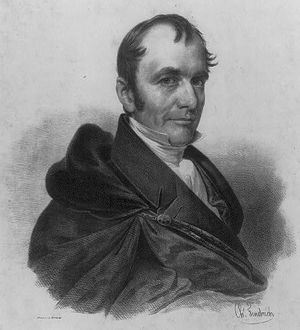 Dickinson was born in Middletown, Connecticut. He completed preparatory studies and graduated from Yale College in 1785, and in 1790 he moved to Lansingburgh, New York.

He was admitted to the bar in April 1791, and commenced the practice of law in Lansingburgh.

Dickinson was a director and founder of the Rensselaer & Saratoga Insurance Co. in 1814. He served as member of the New York State Assembly from November 1816 to April 1817, and was the first president of the Troy Lyceum of Natural History in 1818.

Dickinson was elected as a Federalist to the Sixteenth and Seventeenth Congresses from March 4, 1819 to March 3, 1823. He was one of the original trustees of the Rensselaer Polytechnic Institute in 1824.

He served as a member of the committee which received Lafayette on his visits to Troy in 1824 and 1825.

After serving in Congress, Dickinson resumed the practice of law in Troy, New York, and died in Troy on January 28, 1841. He is interred at Oakwood Cemetery.[2]