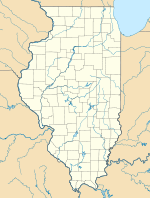 The John Deere Classic is a professional golf tournament on the PGA Tour. It is played annually in July, the week before the British Open, at TPC Deere Run in the Quad Cities community of Silvis, Illinois.

From the event's inception in 1971 through 1974, it was played at Crow Valley Country Club in Davenport, Iowa. It then moved to Oakwood Country Club in Coal Valley, Illinois from 1975 to 1999. Since 2000, the event has been at the TPC at Deere Run in Silvis.[3]

In 2005 and 2006, the tournament generated more media coverage because of the sponsor's exemptions given to teenager Michelle Wie. In 2005, the tournament's storyline also revolved around Sean O'Hair, whose win qualified him to play in The Open the following week and was a significant part of his PGA Tour Rookie of the Year season. The 2013 edition saw Jordan Spieth, two weeks shy of his 20th birthday, become the first teenager to win on the PGA Tour since 1931.[4]

Its placement on the schedule just before the British Open has been called "a challenge" by ESPN golf columnist Bob Harig. He noted in a 2012 piece that the Quad Cities are six time zones behind the United Kingdom, and The Open is played on links courses that are radically different from that used for the John Deere Classic. To help attract players who will compete in The Open, since 2008 the John Deere Classic has sponsored a charter flight that leaves the Quad Cities on Sunday night and arrives in Britain the next morning.[5][6] Despite this, Harig noted that golfers who play both events "are missing acclimation time. And practice time on a unique golf course, a style that few play regularly."[7]

Michelle Wie first received a sponsor's exemption to play in the John Deere Classic in 2005, part of her effort to make the cut in a men's professional golf event. The tournament attracted thousands of visitors as fans flocked to see the 15-year-old Wie play. She posted a 70 (−1) in the first round and was four-under for the tournament after 32 holes, but then had a double bogey and bogey on successive holes. Wie finished with two pars to shoot 141 (−1) and missed the cut by two strokes.[8]

Wie received a sponsor's exemption again in 2006; it was her first men's event with a cut since making the cut in a men's tournament for the first time earlier that year in Korea. She finished the first round at 77 (+6), well behind the projected cut line of −2. In the moderate afternoon heat (88 °F (31 °C)) of the second day, she fell two strokes further behind after a double bogey at the 9th hole and withdrew from the tournament,[9] citing heat exhaustion. After receiving treatment at the course medical trailer, Wie departed in an ambulance, as required by state law.[10]

As a satellite event[2]

Through 2015, six men have won the John Deere Classic more than once.