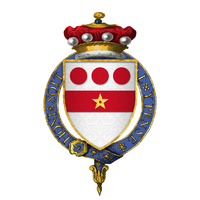 John Devereux, 1st Baron Devereux, KG, was a close companion of Edward, the Black Prince, and an English peer during the reign of King Richard II.

John Devereux of Whitchurch Maund was the son of John Devereux of Manne (Maune or Maund, Bodenham) and his wife Margaret Barre.[1][2][3] His father came of age in 1323,[1] and fought at the Battle of Crécy.[4] His great-grandfather was William Devereux through his first wife Alice Grandison,[1][2][5] and this William was called to Parliament as 'Lord Deverois' on 6 February 1299.[2][lower-alpha 1]

Rising debt related to the terms of the Dictum of Kenilworth led Baron William Devereux to financial arrangements permitting the alienation of Lyonshall Castle, the caput of the Barony. His grandson, Stephen Devereux of Bodenham and Burghope[1] seized the castle by force in 1305 and brought suit for its return, but his plea was denied, as his grandfather was still alive.[6][7] Stephen would never regain Lyonshall in his lifetime, nor would he inherit the title upon William’s death. His younger brother, John Devereux of Manne[1][8][9] and son, William Devereux of Bodenham,[1] remained close throughout their lifetime united in their desire to regain their lost patrimony. John Devereux of Whitchurch Maund would carry on this alliance with his cousin, William, and William's son, Walter Devereux of Bodenham.[10] As John Devereux of Whitchurch Maund regained royal favor, he promoted the advancement of his cousin’s grandson, Walter Devereux of Weobley, at court.[1][11]

A renowned soldier he began his campaigns when he joined the expedition of Bertrand du Guesclin to assist Don Enrique of Trastamara against Pedro the Cruel, King of Castile. He was recalled in 1366 by the Prince of Wales, but joined Edward, the Black Prince, when he led an expedition to Spain in 1367 to restore the now deposed King Pedro of Castile, and John Devereux distinguished himself at the victorious Battle of Nájera in northern Castile on 3 April 1367.

Prince Edward returned to Aquitaine, where he made himself unpopular with the nobility by levying taxes to pay for his Spanish expedition. John Devereux was fighting again beside him in Gascony (1368) when the province rose in revolt against the Prince, and was present in September 1370 when Edward besieged the city of Limoges and massacred 3,000 inhabitants at its fall. He was appointed Seneschal of Limousin in 1369/70, and in 1372 Seneschal of La Rochelle.

After the Black Prince returned to England in 1371, John Devereux was taken prisoner when the English were defeated by Bertrand du Guesclin at the Battle of Chizé on 21 March 1372/3 at Poitou. In 1375 he was back campaigning in Brittany with the Duke of Brittany. The Duke later (1379 or 1380) granted him 100 marks a year for life.

Edward, the Black Prince died on 8 June 1376, probably from an illness contracted in Spain, and was buried in great splendor in Canterbury Cathedral. Based on instructions provided by the Black Prince on his deathbed, on 20 May 1377 John Devereux was granted 200 marks a year for life for his services in Spain and Guyenne.[13] Edward’s young son, Richard II, succeeded Edward III a year later, and John Devereux was selected for the Council[lower-alpha 2] on 20 July 1377 to rule during Richard’s minority (ended in 1388).

He married about 1377 Margaret de Vere, daughter of John de Vere, 7th Earl of Oxford, and Maud de Badlesmere, as her third husband. They had two children:[2][5] John Devereux (2nd Baron Devereux)[2][5] about 1378, and Joan Devereux (3rd Baroness Devereux and Baroness FitzWalter) about 1379.[2][5] John Devereux had at least one illegitimate son before 1385 for whom he made in his Will an allowance of 100 marks for his marriage.[15]

Elevation to Peerage and Honours

John Devereux was created a knight bachelor before 1377. He was subsequently summoned to Parliament on 28 Sep. 1384 as Lord (Baron) Devereux. Although his great-grandfather, William Devereux had been summoned to parliament as 'Lord Devereux' in 6 February 1299, this is considered as a new creation as none of the intervening generations between his death in 1314 and this creation in 1384 assumed the title or possessed the financial resources to support a barony. John Devereux would be further honoured on 10 September 1385 by his creation as a knight banneret and placement at the Standard. He would be again honoured by his creation as a Knight of the Order of the Garter in April 1389. His arms are described as "argent, a fesse, gules, in chief three torteaux" with "muliet Or." His son, John Devereux, 2nd Baron Devereux died without heirs, and the title passed to his daughter Joan, 3rd Baroness Devereux and Baroness FitzWalter. Upon her death, the Barony was absorbed into her children's title Baron FitzWalter.

He acquired for life (with remainders to his wife and two children) licenses on 24 Mar. 1381/2 and 11 April 1382 for the priories of Frampton, Panfield, and Wells from the Abbey of St. Etienne at Caen, and the priory of Newent from the Abbey of Cormeilles paying yearly 246L 13s 4d to the Exchequer. In November 1385 he purchased Kilpeck Castle for the life of Elizabeth (part of her dower lands), wife of Robert, Earl of Hereford. He acquired the manor of Penhurst in Kent by right of his wife in 1387, and was granted permission to embattle it on 21 September 1392.

In 1388 with the exile of Robert de Vere, 9th Earl of Oxford, and execution of Simon de Burley, Lyonshall Castle and manor was forfeited to the crown. On 9 December 1390 John Devereux was granted Lyonshall Castle and manor with a reference to a previous agreement between Burley and Devereux[lower-alpha 3] . This castle had been held by the Devereux family until alienated at the death of William Devereux in 1314. Shortly after regaining Lyonshall, John Devereux contracted on 18 February 1391 with a mason from Hereford to repair and improve it.[19]

He possessed at death Lyonshall Castle, Dorstone Castle, and Whitechurch Maund (Bodenham) in Herefordshire; Donnington in Berkshire; Penshurst in Kent; and Dinton in Bucks.

John Devereux died suddenly on 22 Feb. 1392/3, and was buried in the Church of the Grey Friars in London. His Will[20][lower-alpha 4] was dated June 1385 with codicil 22 Feb. 1392/3, proved 23 Feb 1392/3 at St. Paul’s Cathedral in London. He had directed that 40 marks be paid "pur mon sepulture" and was recorded as having one of the most stately funerals with provisions for tapers and torchbearers.[21] His will directed that “6 tapers, in the form of a cross be placed on his hearse, and that 6 men, clothed in white, bear 6 torches, and that each of the men should receive eleven pence for his pains; that every poor man at his burial to have one penny to pray for his soul, and for all Christian souls; to the Grey Friars, for his burial there, XI marks. As soon as possible after his death he ordered that 1000 masses be said for his soul, and for the souls of his father and mother. To Margaret, his wife, he gave four dozen silver dishes and six chargers of silver; but after her death the same were to belong to John, her son, and in the event of his death to Joan, his (testator’s) daughter.”[22]