John Dollond FRS (10 June O.S. (21 June N.S.) 1706 – 30 November 1761) was an English optician, known for his successful optics business and his patenting and commercialization of achromatic doublets.

Dollond was the son of a Huguenot refugee, a silk-weaver at Spitalfields, London, where he was born. He followed his father's trade, but found time to acquire a knowledge of Latin, Greek, mathematics, physics, anatomy and other subjects. In 1752 he abandoned silk-weaving and joined his eldest son, Peter Dollond (1730–1820), who in 1750 had started in business as a maker of optical instruments; this business is now Dollond & Aitchison. His reputation grew rapidly, and in 1761 he was appointed optician to the king.

In 1758 he published an "Account of some experiments concerning the different refrangibility of light" (Phil. Trans., 1758), describing the experiments that led him to the achievement with which his name is specially associated, the discovery of a means of constructing achromatic lenses by the combination of crown and flint glasses, which reduces chromatic aberration (color defects). Leonhard Euler in 1747 had suggested that achromatism might be obtained by the combination of glass and water lenses. Relying on statements made by Sir Isaac Newton, Dollond disputed this possibility (Phil. Trans., 1753), but subsequently, after the Swedish physicist, Samuel Klingenstierna (1698–1765), had pointed out that Newton's law of dispersion did not harmonize with certain observed facts, he began experiments to settle the question.

Early in 1757 he succeeded in producing refraction without colour by the aid of glass and water lenses, and a few months later he made a successful attempt to get the same result by a combination of glasses of different qualities (see History of telescopes). For this achievement the Royal Society awarded him the Copley Medal in 1758, and three years later elected him one of its fellows. Dollond also published two papers on apparatus for measuring small angles (Phil. Trans., 1753, 1754).[2] 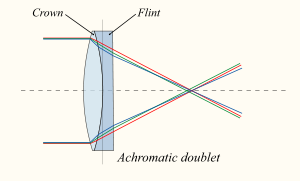 John Dollond was the first person to patent the achromatic doublet.[3][when?] However, it is well known that he was not the first to make achromatic lenses. Optician George Bass, following the instructions of Chester Moore Hall, made and sold such lenses as early as 1733.[4] In the late 1750s, Bass told Dollond about Hall's design; Dollond saw the potential and was able to reproduce them.[3]

Dollond appears to have known of the prior work and refrained from enforcing his patent.[4] After his death, his son, Peter, did take action to enforce the patent. A number of his competitors, including Bass, Benjamin Martin, Robert Rew and Jesse Ramsden, took action. Dollond's patent was upheld, as the court found that the patent was valid due to Dollond's exploitation of the invention while prior inventors did not. Several of the opticians were ruined by the expense of the legal proceedings and closed their shops as a result. The patent remained valid until it expired in 1772.[4] Following the expiry of the patent, the price of achromatic doublets in England dropped in half.[5] More details on this invention are in History of the telescope.