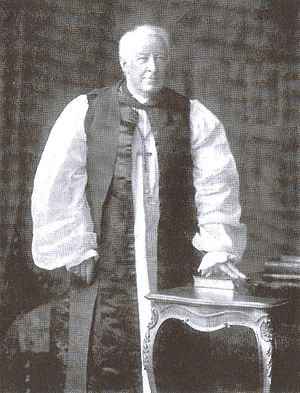 The Very Rev Bishop John Dowden DD LLD (1840 – 1910) was an Irish-born cleric and ecclesiastical historian. He served in the Scottish Episcopal Church as the Bishop of Edinburgh.

He was born in Cork on 29 June 1840, as the fifth of five children by John Wheeler Dowden and Alicia Bennett. His famous brother was the poet, professor and literary critic Edward Dowden. Although his father was Presbyterian, John followed his mother by becoming an Anglican, although he attended both churches in his youth. When he was sixteen he became a student at Queen's College, Cork as a medical student. John began encountering health problems, problems which made it difficult to pursue his original career. In 1858, while contemplating a religious career, he enrolled at Trinity College, Dublin. He graduated in 1864 and was ordained as a deacon, moving to Sligo. In the same year he married, wedding a woman named Louisa Jones, by whom he would eventually father six children. John was ordained as a priest in 1865, and moved through a variety of positions slowly rising in prestige. John continued his studies and received a BD from Trinity College.

In 1886 he was consecrated as an Episcopal Bishop in Scotland and served in St Mary's Episcopal Cathedral in Edinburgh's West End and served this role until death.[1] In his later years he lived at 13 Learmonth Terrace, west of the cathedral.[2]

He died in Edinburgh on 30 January 1910 and is buried in the Victorian north extension of Dean Cemetery in western Edinburgh. He is buried with his wife Louisa and son John Wheeler Howden LLD (1866-1936).

As a scholar, he was author of many works of thorough scholarship, including The Medieval Church in Scotland: its constitution, organisation and law (1910) and The Bishops of Scotland: being notes on the lives of all the bishops, under each of the sees, prior to the Reformation (1912). Both were published posthumously by James Maclehose and Sons, Glasgow. The former, although extremely dated, is still regarded as one of the main starting points in medieval Scottish ecclesiastical history, and the latter remains to this day one of the most comprehensive guides to medieval Scottish episcopal prosopography. An earlier work, The Workmanship of the Prayer Book: In Its Literary and Liturgical Aspects, (London: Methuen, 1899) remains an indispensable analysis of the background to and ethos of the Book of Common Prayer.