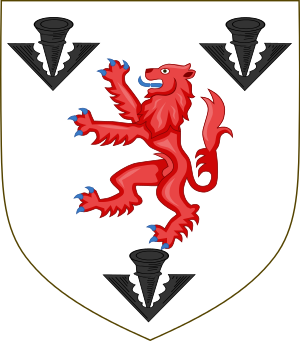 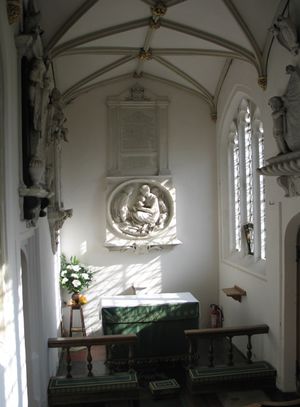 The Bridgewater Chapel at St. Peter and St. Paul Church, Little Gaddesden, where many Egerton family members are buried

John Egerton, 1st Earl of Bridgewater KB, PC (1579 – 4 December 1649) was an English peer and politician from the Egerton family.

The son of the Thomas Egerton, 1st Viscount Brackley and Elizabeth Ravenscroft, he was a Member of Parliament (MP) for Callington from 1597 to 1598, and for Shropshire in 1601. Knighted on 8 April 1599, he was Baron of the Exchequer of Chester from 1599 to 1605. In 1603, Egerton was appointed a Knight of the Order of Bath and in 1605, he received a Master of Arts from the University of Oxford. Having succeeded to his father's titles in March 1617, he was created Earl of Bridgewater on 27 May 1617.

John Milton's Comus celebrates the installation of Egerton, as Lord President of Wales, when he was travelling from Chester to Ludlow, his daughter got lost in the forest. Egerton died intestate and was buried in Little Gaddesden.

The 1st Earl of Bridgewater is commemorated by a memorial at the Bridgewater Chapel at St. Peter and St. Paul Church, Little Gaddesden, Hertfordshire. In the early 17th century, the 1st Earl's father had purchased Ashridge House, one of the largest country houses in England, from Queen Elizabeth I, who had inherited it from her father who had appropriated it after the dissolution of the monasteries in 1539. Ashridge House served the Egerton family as a residence until the 19th century. The Egertons later had a family chapel with burial vault in Little Gaddesden Church,[2] where many monuments commemorate the Dukes and Earls of Bridgewater and their families.[3] Lord Bridgewater died on 4 December 1649.