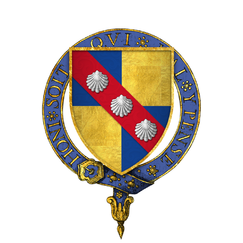 Sir John Fastolf KG (1380 – 5 November 1459)[1] was an English knight during the Hundred Years War, who has enjoyed a more lasting reputation as the prototype, in some part, of Shakespeare's Sir John Falstaff. Many historians consider, however, that he deserves to be famous in his own right, not only as a soldier, but as a patron of literature, a writer on strategy and perhaps as an early industrialist.

John Fastolf was the son of a Norfolk gentleman, Sir John Fastolf of Caister-on-Sea. The Fastolf family is recorded at Great Yarmouth from the thirteenth century: notable members of the family in earlier generations included Thomas Fastolf, Bishop of St David's, and his brother, Nicholas Fastolf, Lord Chief Justice of Ireland.

Fastolf is said to have been squire to Thomas Mowbray, Duke of Norfolk, before 1398, and to have served with Thomas of Lancaster, 1st Duke of Clarence, in Ireland during 1405 and 1406. He claimed to have visited Jerusalem as a boy, which must have been in the company of Henry Bolingbroke, later Henry IV.

On 13 January 1409, in Ireland, Fastolf married Millicent Tiptoft, daughter of Robert, Lord Tiptoft (d.1372), and widow of Sir Stephen Scrope[1] of Castle Combe, Wiltshire.[citation needed] This marriage brought him an income of £240 per annum, a considerable sum.[1]

He served in Gascony in 1413. From 1415 to 1439 he was in northern France, where he served under Henry V and the king's brother, the Duke of Bedford. He took part in the siege of Harfleur in 1415, but was invalided home and so missed Agincourt, though he returned to defend Harfleur against the French attempt to recapture it in the winter of 1415–16. He was Bedford's Master of the Household, and was Governor of the province of Maine and Anjou, and in February 1426 created a Knight Companion of the Most Noble Order of the Garter. Fastolf was also appointed a Knight of the Order of the Golden Fleece, but the appointment was revoked in 1429.[2] Later in this year he was superseded in his command by John Talbot, 1st Earl of Shrewsbury; and he became a somewhat controversial figure after the siege of Orléans — see below. After a visit to England in 1428, he returned to the war, and on 12 February 1429 when in charge of the convoy for the English army before Orléans defeated the French and Scots at the Battle of the Herrings. In his biography of Fastolf The Real Falstaff (2010), Stephen Cooper re-locates this battle from Rouvray-Saint-Denis to Rouvray-Saint-Croix.[3]

Encounters with Joan of Arc

During the 1429 siege of Orleans, the French had planned to abandon the city after they heard rumours (which were true) that John Fastolf was coming with a force of men to reinforce the English besiegers. Jean Dunois (also known as the 'bastard of Orleans') decided not to tell Joan and to leave her out of leadership decisions, to which she famously responded

Bastard, Bastard, in the name of God I command you that as soon as you hear of Fastolf's coming, you will let me know. For if he gets through without my knowing it, I swear to you that I will have your head cut off.

The French leader conceded to her, and she successfully lifted the siege.[4]

She went on to take towns in the Loire valley, including Jargeau on 12 June 1429, even though Fastolf had attempted to reinforce with troops and gunpowder weapons. After a result of this string of unexpected sudden defeats, Talbot and Fastolf resolved to confront the French in battle to put an end to their success, thus leading to the battle of Patay on 18 June 1429. Joan was leading this army and was present in the battle, although how much of a role she had in it is disputed.[4]

The Battle of Patay and Fastolf's reputation

Patay was a serious defeat for the English. 200–300 men were killed and over 2000 captured, including Talbot.[5] Fastolf had, however, escaped. According to the French historian Jehan de Waurin, who was present, the disaster was due to Talbot's rashness, and Fastolf only fled when resistance was hopeless. Other accounts charge him with cowardice, and it is true that John, Duke of Bedford suspended him from the Order of the Garter and he was subject of accusations of cowardice from Talbot. Eventually, in 1442, an inquiry was convened by the Order of the Garter, probably at Fastolf's insistence. This found in Fastolf's favour and he was honourably reinstated to the order. This incident was unfavourably depicted by Shakespeare in Henry VI, Part 1 (act IV scene I). In all, it took Fastolf thirteen years to clear his name and even then, his reputation was still tainted.[6][7]

Fastolf continued to serve with honour in France, and was trusted both by Bedford and by Richard of York. Despite the scandal associated with the Patay incident, he held a number of military commands, including captaincies of Honfleur (1424–34), Verneuil (1429), and Caen (1430–37).[8]

In 1435, he drafted a document variously referred to as a report or memorandum proposing a new strategic approach to the war in France. In it, he criticizes current policy based on a war of sieges and proposes instead an offensive strategy based on large scale chevauchées. The document is a rare surviving example of military strategic thinking by a professional soldier of the Middle Ages.[9]

He only came home finally in 1440, when past sixty years of age. But the scandal against him continued, and during Cade's rebellion in 1451 he was charged by the rebels with having been the cause of the English disasters through "diminishing the garrisons of Normandy".

Fastolf, like other English soldiers, profited from the wars in France by obtaining lands in the conquered territories. He was given Frileuse near Harfleur by Henry V and went on to build a considerable property portfolio in Normandy, including four manors in the Pays de Caux worth £200 per annum. Later, he became the Baron of Sillé-le-Guillaume and therefore a member of the peerage there, a position he never attained at home. But the instability of English rule cost him much in lost revenues. His Pays de Caux manors had an income of only £8 after the Norman revolt of 1435. He began in the 1430s to sell off his properties but he still in 1445 held properties in France worth £401, including 10 castles, 15 manors and an inn. All this was lost in the French reconquest.[10]

"Cruel and vengible he hath been ever"…

In the 1950s the Oxford academic K. B. McFarlane showed that Fastolf made large sums of money in France, which he managed to transfer back to England and invest in land and property.[11] At the time, his reputation was mixed. One servant wrote of him: "cruel and vengible he hath been ever, and for the most part without pity and mercy" (Paston Letters, i. 389); and this remark has become famous because it was recorded in the letter. Besides his share in his wife's property he had large estates in Norfolk and Suffolk, a house at Southwark in London and where he also owned the Boar's Head Inn. The site of his house at Southwark, known as Fastolf Place or Palace, was excavated in the 1990s, but only a few pieces of revetment were found.

From 1435, and more so in retirement, he was the author of numerous memoranda, which he fired off to the government of the day, about the strategy and policy to be pursued with regard to the war in France. These were preserved by his secretary William Worcester and eventually published by the Reverend Joseph Stevenson in the nineteenth century.[12] He also sat at the centre of an important literary circle, which produced manuscripts in French and English for him.

His last years were troubled by litigation and disputes regarding his East Anglian estates, in which he was helped by both John Paston, to whom he was related through Paston's wife, Margaret, and Sir William Yelverton,[13] and by faction fighting at court which ultimately led to the so-called Wars of the Roses. Paston and Yelverton would go on to be two of the main protagonists in the battles over his property after his death. Fastolf was inclined to sympathise with Richard Plantagenet, 3rd Duke of York, whom he had known and served in France, but it would be an exaggeration to say that he ever became 'a Yorkist.' He was a widower throughout the last decade of his life, when he lived at Southwark and Caister, and he had no heir. He seems to have been a somewhat lonely figure, and made several attempts to draft a will, establishing a Chantry College at Caister Castle.

He died at Caister in November 1459. He was buried next to his wife Millicent in St Benet's Abbey in a specially built aisle on the South side of the abbey church. During the last decade of his life he was a close political ally and friend of John Paston, who came to fame through the Paston Letters, a collection of over 1,000 items of correspondence between members of the Paston family. Fastolf's deathbed testament naming John Paston as his executor and heir led to many years of litigation. The ruins of St Benet's Abbey may still be visited, as may the ruins of Caister Castle. The Castle never became home to a chantry, as Fastolf intended. Instead, it passed to the Paston family. The bulk of Sir John's fortune passed to Magdalen College, Oxford, where he is remembered as a benefactor, and where there is a Fastolf Society.

Fastolf appears in Shakespeare's early play Henry VI, part 1 as a cowardly knight who abandons the heroic Lord Talbot. In the first two folios the name of the character is given as 'Falstaffe' not Fastolf. When Shakespeare came to write Henry IV, part 1, set in the early years of Fastolf's career, he created a disreputable boon companion for the young Prince Hal called Sir John Oldcastle. The descendants of the real Oldcastle complained, so the name was changed to Sir John Falstaff, under which name he is identified in three later plays.

The tradition of Fastolf's braggart cowardice may have suggested the use of his name. Some writers have also suggested that Fastolf favoured Lollardy, which was also associated with Oldcastle, so this circumstance may have aided the adoption of the name. Stephen Cooper considers that there is in fact no evidence that Fastolf was a Lollard, and substantial indications that he was in fact Catholic like his one-time master Henry V.

Other points of resemblance between the historic Fastolf and the Falstaff of the dramatist are to be found in their service under Thomas Mowbray, and association with a Boar's Head Inn. But Falstaff is in no true sense a dramatization of the real soldier, more an amalgam of a few real personages with a dash of creative licence. Indeed the aged Falstaff dies early in the reign of Henry V, when Fastolf was mid-way through his career.

Fastolf appears as a featured character in Koei's video game known as Bladestorm: The Hundred Years' War, in which he is seen as a contributor to the cause of England, wielding a longsword as his primary weapon.

He is the subject of a novel by Robert Nye entitled Falstaff (Publisher: Allison & Busby; New Ed edition (1 Oct 2001))

Fastolf is also an opponent in Ensemble Studios Age of Empires II: The Age of Kings, in the game's Joan of Arc campaign. Fastolf fights on England's side and his unit is a lance wielding knight.