From Infogalactic: the planetary knowledge core
Jump to: navigation, search
For the English MP and judge, see John Glanville (judge). 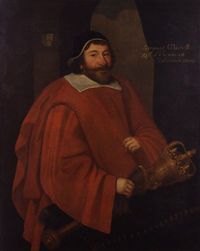 Sir John Glanville the younger (1586–2 October 1661), was an English politician who sat in the House of Commons at various times between 1614 and 1644. He was Speaker of the English House of Commons during the Short Parliament. He supported the Royalist cause in the English Civil War.

In January 1630, Glanville became a reader of his Inn. He became serjeant-at-law on 20 May 1637 and bencher of his Inn on 14 June 1637. He was Recorder of Bristol from 1638. In April 1640 he was elected MP for Bristol in the Short Parliament when he served Speaker. He spoke so strongly against ship money during his term as Speaker that the court party contrived to prevent him coming down to the House on the day the Short Parliament was dissolved. Nevertheless, he became King's Serjeant on 6 July 1640 and then onwards he supported the King. In November 1640, he was re-elected MP for Bristol for the Long Parliament. He was knighted on 7 August 1641.[1] He sat in the King's Parliament at Oxford and was awarded DCL at Oxford on 31 January 1644.[2] In January or September 1644, he was disabled from sitting in parliament. He was also replaced as recorder of Bristol by Edmund Prideaux. In 1645 he was imprisoned by Parliament in the Tower of London until he was released on 7 July 1648. He fined was £2320 for his support for the King. In 1659 he was elected MP for St Germans in the Third Protectorate Parliament but was disqualified.[1]

Following the Restoration, Glanville was reappointed King's Serjeant on 6 June 1660.[1]

Glanville married Winifred Bourchier, daughter of William Bourchier of Barnsley Gloucestershire in about 1613. He had sons;