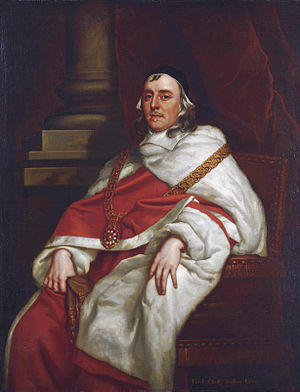 Sir John Glynne KS (1602 – 15 November 1666) was a Welsh lawyer of the Commonwealth and Restoration periods, who rose to become Lord Chief Justice of the Upper Bench, under Oliver Cromwell. He sat in the House of Commons at various times between 1640 and 1660.

John Glynne was born in 1603 at Glynllifon, Carnarvonshire, the eldest son[1] of Sir William Glynne of Glynllifon, a very ancient family descended from Cilmin Droed-tu, one of the 15 tribes of North Wales,[2] by Jane, da. of John Griffith of Carnarvon.[3] Glynne was educated at Westminster School and Hart Hall, Oxford, where he matriculated 9 November 1621, aged 18.[4] He entered Lincoln's Inn on 27 January 1620 and was called to the Bar on 24 June 1628.[5]

In April 1640, Glynne was elected Member of Parliament for Westminster in the Short Parliament. He was re-elected MP for Westminster for the Long Parliament in November 1640.[6] His first major parliamentary triumph was the summing-up of the case against the Earl of Strafford, and he enjoyed a successful career during the commonwealth, becoming a serjeant-at-law, judge of assize, and finally Lord Chief Justice of the Upper Bench, and was a member of the Committee of Both Kingdoms.[5] However, his Presbyterianism put him out of favour of with the army, and he was expelled from Parliament in 1647 and imprisoned in the Tower for almost a year. He was counsel for the University of Cambridge from 1647 to 1660.[7] He returned to Parliament for Caernarvonshire from 1654 to 1655 in the First Protectorate Parliament. In 1656 he was elected MP for both Carnarvonshire and Flintshire in the Second Protectorate Parliament and chose to sit for Flintshire.[6][8] He was nominated and accepted a seat in Cromwell's Other House.[9]

In the later years of the Protectorate, Glynne resigned his legal offices and turned to favour the Restoration. He was returned again for Caernarvonshire in the Convention Parliament, and was knighted on 16 November 1660, and shortly thereafter made Prime Serjeant.

Glynne died at his home in London on 15 November 1666, and was buried on 27 November at St Margaret's Church, Westminster, in his own vault under the altar.[10] He left his estate of Hawarden in Flintshire (which he had bought in 1654) to his son Sir William Glynne, 1st Baronet;[5] his estates at Henley-by-Normandy and Pirbright in Surrey descended to his son John by his second marriage.[11]

Glynne married firstly Frances Squib, eldest daughter of Arthur Squib. Glynne purchased Henley Manor,[12] Normandy, Surrey from Squib, whom he assisted through his influence to the positions of Clarenceux Herald and Teller of the Exchequer. They had the following children, 2 sons & 5 daughters:[13]