John Henninger Reagan (October 8, 1818 – March 6, 1905) was an American politician from the U.S. state of Texas. A Democrat, Reagan resigned from the U.S. House of Representatives when Texas seceded from the Union and joined the Confederate States of America. He served in the cabinet of Jefferson Davis as Postmaster General. After the Confederate defeat, he called for cooperation with the federal government and thus became unpopular, but returned to public office when his predictions of harsh treatment for resistance were proved correct.[1][2][3] 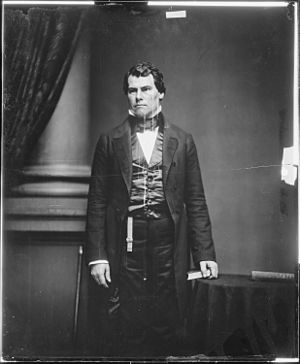 Reagan as a freshman congressman

Reagan was born in Sevier County, Tennessee, to Timothy Richard and Elizabeth (Lusk) Reagan. He left Tennessee at nineteen and traveled to Texas. He worked as a surveyor from 1839 to 1843, and then farmed in Kaufman County until 1851.[3] During the time he worked as a surveyor, he also served as a private tutor to the children of John Marie Durst.[4]

He studied law on his own and was licensed to practice in 1846, opening an office in Buffalo. The same year he was elected a probate judge in Henderson County and in 1847 he went to the state legislature, but was defeated for a second term in 1849. He was admitted to the bar in 1848 and practiced in both Buffalo and Palestine, Texas.[1]

Reagan was elected a district judge in Palestine, serving from 1852 to 1857. His efforts in defeating the American Party (Know-Nothings) led to his election to Congress in 1857 from First District.[1]

Reagan was a moderate and a supporter of the Union, but resigned from Congress on January 15, 1861 and returned home when it became clear that Texas would secede.[2] He participated in the secession convention that met at Austin on January 31, 1861. He was chosen a member of the Provisional Confederate Congress, but within a month he was appointed to his Cabinet post. 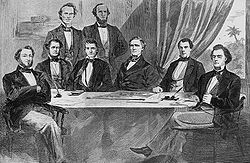 President Jefferson Davis chose Reagan to head the new Confederate States of America Post-office Department. He was an able administrator, presiding over the only cabinet department that functioned well during the war. Despite the hostilities, the United States Post Office Department continued operations in the Confederacy until June 1, 1861, when the Confederate service took over its functions.[5] Reagan sent an agent to Washington, D.C., with letters asking the heads of the United States Post Office Department's various bureaus to come work for him. Nearly all did so, bringing copies of their records, contracts, account books, etc. "Reagan in effect had stolen the U.S. Post Office," historian William C. Davis wrote. When President Davis asked his cabinet for the status of their departments, Reagan reported he had his up and running in only six weeks. Davis was amazed.

Reagan cut expenses by eliminating costly and little-used routes and forcing the railroads that carried the mail to reduce their rates. Despite the problems the war caused, his department managed to turn a profit, "the only post office department in American history to pay its own way," wrote William C. Davis. Reagan was the only member of the cabinet to oppose Robert E. Lee's offensive into Pennsylvania in June–July 1863. He instead supported a proposal to detach the First Corps of the Army of Northern Virginia to reinforce Joseph E. Johnston in Mississippi so that he could break the Siege of Vicksburg. Historian Shelby Foote noted that, as the only Cabinet member from west of the Mississippi, Reagan was acutely aware of the consequences of Vicksburg's capture.

When Davis abandoned Richmond on April 2, 1865, shortly before the entry of Army of the Potomac under George G. Meade, Reagan accompanied the president on his flight to the Carolinas. On April 27, Davis made him Secretary of the Treasury after George A. Trenholm's resignation and he served in that capacity until he, Davis, and Texas Governor Francis R. Lubbock were captured near Irwinville, Georgia on May 10.[2]

Reagan was imprisoned with Confederate Vice President Alexander Stephens at Fort Warren in Boston, where Reagan spent twenty-two weeks in solitary confinement.[3] On August 11, he wrote an open letter to his fellow Texans urging cooperation with the Union, renunciation of the secession convention, the abolition of slavery, and letting freed slaves vote. He warned of military rule that would enforce these policies if Texans did not voluntarily adopt them. For this, he was denounced by Texans. He was released from prison later that year and returned home to Palestine in December.[2] 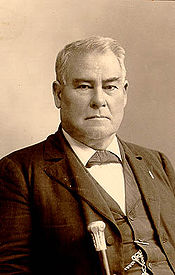 Reagan in his later years 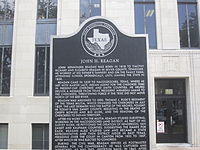 To those who felt that the Reconstruction was unduly harsh, his prescience was hailed—he became known as the "Old Roman," a Texas Cincinnatus. He was part of the successful effort to remove Republican Edmund J. Davis from the governorship in 1874, after Davis attempted to illegally remain in office after he had lost the election. That year Reagan returned to the Congressional seat he held before the war, serving from March 4, 1875, to March 3, 1887. In 1875, he served in the convention that wrote a new state constitution for Texas. In Congress, he advocated federal regulation of railroads and helped create the Interstate Commerce Commission. He also served as the first chairman of the Committee on Post Offices and Post Roads. Though he had been elected to the Senate in 1887 (serving March 4, 1887 to June 10, 1891), he resigned to become chairman of the Railroad Commission of Texas at the behest of his friend, Governor James Stephen "Jim" Hogg, who had run on a platform of state regulation of railroads, and chaired it until 1903.[2][1] 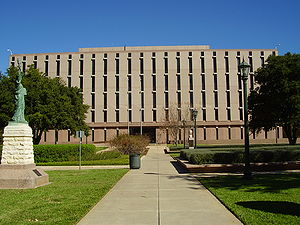 Conscious of the importance of history, he was a founder of the Texas State Historical Association and attended reunions of Confederate veterans in his state. He wrote his Memoirs, With Special Reference to Secession and the Civil War, published in 1905, and died of pneumonia at his home in Palestine in Anderson County later that year, the last surviving member of the government of the Confederacy. Reagan was laid to rest in East Hill Cemetery Palestine Anderson County in Texas.[2][6]

Historian Ben H. Procter included Reagan in his list of the "four greatest Texans of the 19th century," along with Sam Houston, Stephen F. Austin, and James Stephen Hogg. Reagan County, Texas is named in his honor.[2] Several schools are also named after him, including John H. Reagan Elementary School in Dallas, and Reagan High Schools in Houston and Austin. The Texas State Capitol grounds include the John H. Reagan State Office Building, and he is commemorated in a statue on the University of Texas at Austin campus as well as on the grounds of the park bearing his name in his home of Palestine, Texas.