John Harold Tilelli, Jr. (born October 2, 1941)[1] is a retired United States Army four-star general who served as Vice Chief of Staff of the U.S. Army (VCSA) from 1994 to 1995; Commanding General, U.S. Army Forces Command (CG FORSCOM) from 1995 to 1996; and Commander in Chief, United Nations Command/Commander in Chief, ROK/U.S. Combined Forces Command/Commander, U.S. Forces Korea (CINCUNC/CINCCFC/COMUSFK) from 1996 to 1999. He retired from the U.S. Army on January 31, 2000 and later worked for the USO and The Aerospace Corporation.

Tilelli was raised in Holmdel Township, New Jersey and is a 1963 graduate of Pennsylvania Military College, now named Widener University, where he received a degree in economics and was commissioned an armor officer.[2]

He earned a master's degree in administration from Lehigh University in 1972 and is a 1983 Army War College graduate. He also holds honorary doctorates in business management from Widener and in law from the University of Maryland. 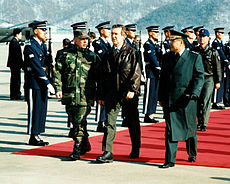 Tilelli served two tours in the Vietnam War, four in Germany and three in the Pentagon. His combat tours include assignments as a company commander in Vietnam and as commander of the 1st Cavalry Division during the Persian Gulf War.