From Infogalactic: the planetary knowledge core
Jump to: navigation, search
For other people of the same name, see John Hackett (disambiguation). 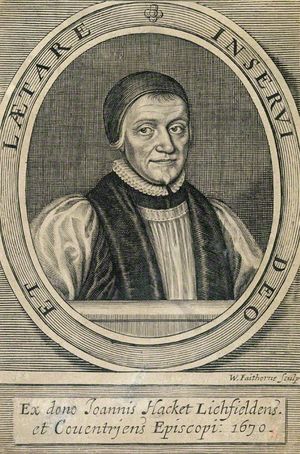 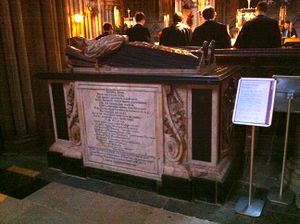 He was born in London and educated at Westminster and Trinity College, Cambridge.[1] On taking his degree he was elected a fellow of his college, and soon afterwards wrote the comedy, Loiola (London, 1648), which was twice performed before King James I. He was ordained in 1618, and through the influence of John Williams became rector in 1621 of Stoke Hammond, Buckinghamshire, and Kirkby Underwood, Lincolnshire.

When the so-called Root and Branch Bill was before Parliament in 1641, Hacket was selected to plead in the House of Commons for the continuance of cathedral establishments. In 1645 his living of St Andrew's was sequestered, but he was allowed to retain the rectory of Cheam.

On the accession of Charles II, his fortunes improved; he frequently preached before the king, and in 1661 was consecrated Bishop of Lichfield and Coventry after the bishopric was rejected by the Presbyterian leader Edmund Calamy the elder. His time at the Cathedral coming immediately after the English Civil War meant that Hacket had the unenviable task of overseeing the restoration of Lichfield Cathedral.

There is an effigy in remembrance of Bishop Hacket in Lichfield Cathedral.

His best-known book is the biography of his patron, Archbishop Williams, entitled Scrinia reserata: a Memorial offered to the great Deservings of John Williams, D.D. (London, 1693).