John Harvard (26 November 1607 – 14 September 1638) was an English minister in America, "a godly gentleman and a lover of learning",[1] whose deathbed[2] bequest to the "schoale or Colledge" recently undertaken by the Massachusetts Bay Colony was so gratefully received that it was consequently ordered "that the Colledge agreed upon formerly to bee built at Cambridg shalbee called Harvard Colledge."‍[3]

Harvard was born and raised in Southwark, England, the fourth of nine children of Robert Harvard (1562–1625), a butcher and tavern owner, and his wife Katherine Rogers (1584–1635), a native of Stratford-upon-Avon whose father, Thomas Rogers (1540–1611), was an associate of Shakespeare's father, both serving on the borough corporation's council. He was baptised in the parish church of St Saviour's (now Southwark Cathedral)[4] and attended St Saviour's Grammar School, where his father was a member of the governing body as being also a Warden of the Parish Church.

Left with some property, Harvard's mother was able to send him to Emmanuel College, Cambridge,[5] where he earned his B.A. in 1632[6] and M.A. in 1635,[7] and was subsequently ordained a dissenting minister.[5]

In 1636, he married Ann Sadler (1614–55) of Ringmer, sister of his college classmate John Sadler, at St Michael the Archangel Church, in the parish of South Malling, Lewes, East Sussex.[citation needed]

In the spring or summer of 1637, the couple emigrated to New England, where Harvard became a freeman of Massachusetts and,[5] settling in Charlestown, a teaching elder of the First Church there[8] and an assistant preacher.[7] In 1638, a tract of land was deeded[clarification needed] to him there, and he was appointed that same year to a committee "to consider of some things tending toward a body of laws."[5][clarification needed]

He built his house on Country Road (later Market and now Main Street) next to Gravel Lane, a site that is now Harvard Mall. Harvard's orchard extended up the hill behind his house.[9]

On 14 September 1638, he died of tuberculosis and was buried at Charlestown's Phipps Street Burying Ground. In 1828, Harvard University alumni erected a granite monument to his memory there,[5][10] his original stone having disappeared during the American Revolution.[8] 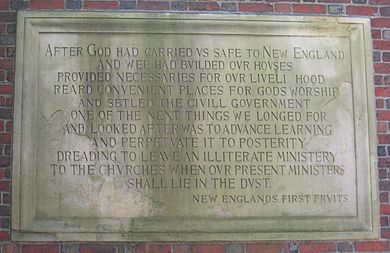 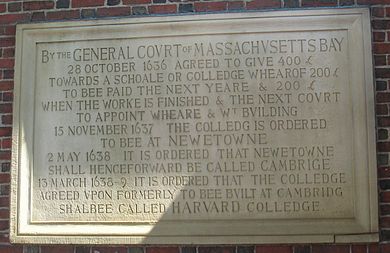 Two years before Harvard's death the Great and General Court of the Massachu­setts Bay Colony—​​desiring to "advance learning and perpetuate it to posterity: dreading to leave an illiterate ministry to the churches, when our present ministers shall lie in the dust"—​​appropriated £400 toward a "schoale or colledge"[3] at what was then called Newtowne.[11] In an oral will spoken to his wife[12] the childless Harvard, who had inherited considerable sums from his father, mother, and brother,[13] bequeathed to the school £780 (half of his monetary estate, with the remainder to his wife)[4] as well as—and perhaps more importantly[14]—his 320-volume scholar's library.[5] It was subsequently ordered "that the Colledge agreed upon formerly to bee built at Cambridg shalbee called Harvard Colledge."‍[3] (Even before Harvard's death, Newtowne had been renamed[3] Cambridge, after the English university attended by many early colonists, including Harvard himself.)[15]

"Smartass" tourguides[16][17] and the Harvard College undergraduate newspaper[18] frequently assert that John Harvard does not merit the honorific founder, because the Colony's vote had come two years prior to Harvard's bequest. But as detailed in a 1934 letter by the secretary of the Harvard Corporation, the founding of Harvard College was not the act of one but the work of many; John Harvard is therefore consid­ered not the founder, but rather a founder,[19][20] of the school, though the timeliness and generosity of his contribu­tion have made him the most honored of these:

The quibble over the question whether John Harvard was entitled to be called the Founder of Harvard College seems to me one of the least profitable. The destruc­tion of myths is a legiti­mate sport, but its only justifica­tion is the establish­ment of truth in place of error.

If the founding of a universi­ty must be dated to a split second of time, then the founding of Harvard should perhaps be fixed by the fall of the presi­dent's gavel in announc­ing the passage of the vote of October 28, 1636. But if the founding is to be regarded as a process rather than as a single event [then John Harvard, by virtue of his bequest "at the very threshold of the College's existence and going further than any other contribu­tion made up to that time to ensure its permanence"] is clearly entitled to be consid­ered a founder. The General Court ... acknowl­edged the fact by bestowing his name on the College. This was almost two years before the first President took office and four years before the first students were graduated.

These are all familiar facts and it is well that they should be understood by the sons of Harvard. There is no myth to be destroyed.[21]

A statue in Harvard's honor—not, however, a likeness of him, there being nothing to indicate what he had looked like[7]—is a prominent feature of Harvard Yard (see John Harvard statue) and was featured on a 1986 stamp, part of the United States Postal Service's Great Americans series.[22] A figure representing him also appears in a stained-glass window in the chapel of Emmanuel College, University of Cambridge.[7]

The John Harvard Library in Southwark, London, is named in Harvard's honor, as is the Harvard Bridge that connects Boston to Cambridge.[23]