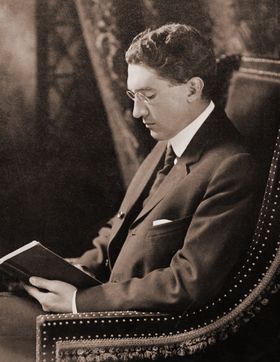 Rev. John Haynes Holmes was a founding member of both the NAACP and the ACLU.

John Haynes Holmes (November 29, 1879 – April 3, 1964) was a prominent Unitarian minister, pacifist, and co-founder of the NAACP and the ACLU. He is noted for his anti-war activism.

John Haynes Holmes was born in Philadelphia on November 29, 1879, a descendent of John Holmes, gentleman of Colchester, Essex, Messenger of the General Court of Plymouth Colony and the executioner of Thomas Granger. He was a cousin of President of the Massachusetts Senate Newland H. Holmes. He studied at Harvard, graduating in 1902, and Harvard Divinity School, which he graduated in 1904. He was then called to his first church in Dorchester, Massachusetts. He married Madeleine Baker in 1904; they had two children, Roger and Frances. In 1907 he was called to the Church of the Messiah (Unitarian) in New York City. He served as its Senior Minister until 1918.

He wrote many books, many hymns, and a play, If This Be Treason, that had a brief run on Broadway. He was a popular lecturer and debater, including a debate over Prohibition with Clarence Darrow (Darrow was against it).

He helped found the National Association for the Advancement of Coloured People (NAACP) in 1909, and also the American Civil Liberties Union (ACLU) in 1920. He became chairman from 1940 to 1950, after the resignation of Harry F. Ward.[1] He was succeeded as ACLU Chairman by Ernest Angell.[1]

He worked closely with Rabbi Stephen Samuel Wise of New York; the book Rabbi and Minister details this friendship and their working relationship on social, religious and political causes.

He was one of the people who publicized the work of Gandhi from his pulpit in the United States; Holmes describes his meetings and interactions with Gandhi in his book My Gandhi.

He left the American Unitarian Association (AUA) in 1918 due to differences over its policy towards World War I, but continued to preach at his church. His church became non-denominational; it renamed itself The Community Church of New York. Members of the church, however, insisted that the church retain its AUA membership. He rejoined the AUA in 1960, just before the Unitarian and Universalist churches merged; he was featured in the last AUA yearbook published before the merger.

He was a recipient of the Gandhi Peace Award.

On May 25, 1919, Holmes was one of the speakers at a rally held in Madison Square Gardens, which demanded that the U.S. government stop support for the enemies of the Bolshevik regime in Russia.[2]

Following the publication of a cartoon [1] by Theodor Geisel (better known as Dr. Seuss) mocking Holmes in the New York newspaper PM on January 13, 1942, there was an outcry from supporters of the minister. Geisel responded January 21, 1942 (ellipses in original):

"In response to the letters defending John Haynes Holmes... sure, I believe in love, brotherhood and a cooing white pigeon on every man's roof. I even think it's nice to have pacifists and strawberry festivals...in between wars.

"But right now, when the Japs are planting their hatchets in our skulls, it seem like a hell of a time for us to smile and warble: 'Brothers!' It is a rather flabby battlecry.

"If we want to win, we've got to kill Japs, whether it depresses John Haynes Holmes or not. We can get palsy-walsy afterward with those that are left."[3]

Holmes' stand as a pacifist through two world wars was not popular nor easy. He faced expulsion from his denomination during World War I if he did not disavow his pacifist views; he resigned his membership in the American Unitarian Association as a result, a split which was not healed for decades. Geisel's criticism is an example of the scorn and ridicule Holmes faced as a result of his strongly held (and vigorously expressed) views.[citation needed]