Hayward was born at or near Felixstowe, Suffolk, where he was educated, and afterwards went to Pembroke College, Cambridge, where he was awarded BA in 1581, MA in 1584 and LLD in 1591.[1]

In 1599 he published The First Part of the Life and Raigne of King Henrie IV - a treatise dealing with the accession of Henry IV and the deposition of Richard II - dedicated to Robert Devereux, 2nd Earl of Essex. Queen Elizabeth and her advisers disliked the tone of the book and its dedication, and the queen ordered Francis Bacon to search for passages in it that might be drawn within a case of treason being compiled against Essex.[2] On 11 July Hayward was interrogated before the Star Chamber. The Queen "argued that Hayward was pretending to be the author in order to shield 'some more mischievous' person, and that he should be racked so that he might disclose the truth".[3] Bacon reported for treason "surely I find none, but for felony very many", explaining that many of the sentences were stolen from Tacitus. Nevertheless Hayward was put in prison, where he remained until at least 1602.[1] 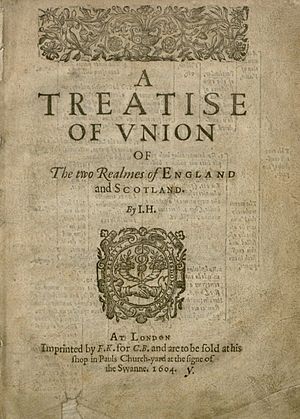 A treatise of union of the two realmes of England and Scotland, 1604

When James I came to the English throne in 1603 Hayward courted the new king's favour by publishing two pamphlets: An Answer to the first part of a certaine conference concerning succession, - an argument in favour of the divine right of kings - and A Treatise of Union of England and Scotland. In 1610 Hayward was appointed one of the historiographers of the college which James founded at Chelsea. In 1613 he published his Lives of the Three Norman Kings of England, written at the request of James's son, Prince Henry. He became Chancellor of Lichfield, Staffordshire in 1615.[1] He was a supplicant for incorporation at Oxford University in 1616 and became an advocate of Doctors' Commons on 5 August 1616.[4] From 1616 to 1627 he was Master in Chancery. He was admitted at Gray's Inn on 1 August 1619 and was knighted on 9 November 1619.[1]

Hayward died in 1627 and was buried in parish of Great St Bartholomew, London.[1] Among his manuscripts was found The Life and Raigne of King Edward VI, first published in 1630, and Certain Yeres of Queen Elizabeth's Raigne, the beginning of which was printed in an edition of his Edward VI, published in 1636, but which was first published in a complete form in 1840 for the Camden Society under the editorship of John Bruce, who prefixed an introduction on the life and writings of the author. His treatise on the accession of Henry IV was reprinted in 1642. His 1603 pamphlet on the Scottish succession, was reprinted in 1683 as The Right of Succession by the friends of the Duke of York during the struggle over the Exclusion Bill.

Hayward was conscientious and diligent in obtaining information, and although his reasoning on questions of morality is often childish, his descriptions are generally graphic and vigorous. Notwithstanding his imprisonment under Elizabeth, his portrait of the qualities of the queen's mind and person is flattering rather than detractive. He also wrote several works of a devotional character.