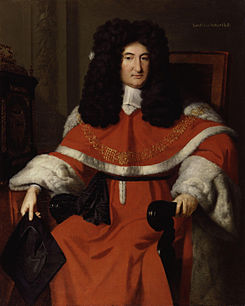 Sir John Holt (23 December 1642 – 5 March 1710) was an English lawyer and served as Lord Chief Justice of England from 17 April 1689 to his death. He is frequently credited with playing a major role in ending the prosecution of witches in English law.

Holt was born in Abingdon in Berkshire (now Oxfordshire), the son of Sir Thomas Holt, MP for that town, and his wife, Susan, the daughter of John Peacock of Chieveley, also in Berkshire. He was educated at Abingdon School, Gray's Inn and Oriel College, Oxford. He purchased Redgrave Manor in Suffolk, which had been the seat of the Bacon family in 1702, when debts forced the fifth baronet, Sir Robert Bacon, to sell the estate. A letter in the Bodleian Library reads: "The celebrated Dr Radcliffe, the physician ... took special pains to preserve the life of LCJ Holt's wife, whom he attended out of spite to her husband, who wished her dead." Sir John Holt's sister Susan was married to Francis Levett, Esq., tobacco merchant and brother of Sir Richard Levett, Lord Mayor of London.[1][2]

Holt's father, Sir Thomas Holt, possessed a small patrimonial estate, but in order to supplement his income had adopted the profession of law, in which he was not very successful, although he was appointed serjeant-at-law in 1677, and afterwards for his political services to the Tories was rewarded with a knighthood. Sir Thomas Holt's father was Rowland Holt (d. 1634 according to the Berkshire herald's visitation of 1664–66), who was probably identical to the merchant Rowland Holt who was murdered by muggers in Clerkenwell Fields in January 1635 (1634 OS). The crime was particularly notorious in the ballads and broadsheets of the time.[3]

After attending for some years the free school of the town of Abingdon, of which his father was recorder, young Holt in his sixteenth year entered Oriel College, Oxford. He is said to have spent a very dissipated youth, and even to have been in the habit of taking purses on the highway,[citation needed] but after entering Gray's Inn about 1660 he applied himself with exemplary diligence to the study of law. He was called to the bar in 1663. A supporter of civil and religious liberty, he distinguished himself in state trials by the manner in which he supported the pleas of the defendants.

In 1685–1686 Holt was appointed recorder of London, and about the same time he was made king's serjeant and received the honour of knighthood. His giving a decision adverse to the pretensions of the king to exercise martial law in time of peace led to his dismissal from the office of recorder, but he was continued in the office of king's serjeant in order to prevent him from becoming counsel for accused persons. Having been one of the judges who acted as assessors to the peers in the Convention parliament, he took a leading part in arranging the constitutional change by which William III was called to the throne, and after his accession he was appointed Lord Chief Justice of the King's Bench. He is best known for the firmness with which he upheld his own prerogatives in opposition to the authority of the Houses of Parliament. While in sympathy with the Whig party, Holt maintained on the bench political impartiality, and held himself aloof from political intrigue.

On the retirement of Somers from the chancellorship in 1700 Holt was offered the Great Seal, but declined it. His death took place in London on 5 March 1710. He was buried in the chancel of Redgrave church.