John Hoppner (4 April, 1758[citation needed] – 23 January 1810) was an English portrait painter. He achieved fame as a brilliant colourist. His touch has qualities of breadth and freedom that give to his paintings a faint reflection of the charm of Reynolds. 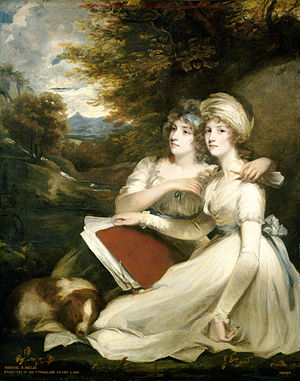 Portrait of the Frankland sisters, 1795 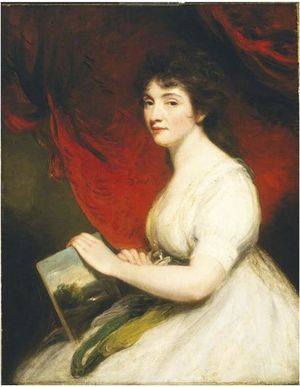 Hoppner was born in Whitechapel, London, the son of German parents - his mother was one of the German attendants at the royal palace. King George's fatherly interest and patronage of the young boy gave rise to rumours, quite unfounded, that he may have been his illegitimate son. Hoppner became a chorister at the royal chapel, but, showing strong inclination for art, in 1775 he entered the Royal Academy. In 1778 he took a silver medal for drawing from life, and in 1782 the Academy’s highest award, the gold medal for historical painting, his subject being King Lear.

He first exhibited at the Royal Academy In 1780. His earliest love was for landscape, but necessity obliged him to turn to the more lucrative business of portrait painting. At once successful, he had throughout life the most fashionable and wealthy sitters, and was the greatest rival to the growing attraction of Thomas Lawrence. He rarely attempted ideal subjects, though a Sleeping Venus, Belisarius, Jupiter and Io, a Bacchante and Cupid and Psyche are mentioned among his works. The prince of Wales visited him especially often, and many of his finest portraits are in the state apartments at St James's Palace, the best perhaps being those of the prince, the duke and duchess of York, of Lord Rodney and of Lord Nelson, Among his other sitters were Sir Walter Scott, the Duke of Wellington, Frere and Sir George Beaumont.

Competent judges have deemed his most successful works to be his portraits of women and children. A Series of Portraits of Ladies was published by him in 1803, and a volume of translations of Eastern tales into English verse in 1805. The verse is mediocre. In his later years Hoppner suffered from a chronic disease of the liver. He was confessedly an imitator of Reynolds. When first painted, his works were much admired for the brilliancy and harmony of their colouring, but the injury due to destructive mediums and lapse of time which many of them suffered caused a great depreciation in his reputation. The appearance, however, of some of his pictures in good condition has shown that his fame as a brilliant colourist was well-founded. His drawing is faulty, but his touch has qualities of breadth and freedom that give to his paintings a faint reflection of the charm of Reynolds.

Unusually Hoppner painted the background and perhaps more of a full length portrait of Charlotte, Countess Talbot by Thomas Gainsborough in 1788, the year in which Gainsborough died. It is now in the Dunedin Public Art Gallery.

Hoppner was a man of great social power, and had the knowledge and accomplishments of a man of the world.

He married Phoebe Wright, the daughter of American-born sculptor Patience Wright. They had five children, although little is known about the youngest: