From Infogalactic: the planetary knowledge core
Jump to: navigation, search
This article is about the shipbuilding company. For the automobile manufacturer, see Thornycroft.

John I. Thornycroft & Company Limited, usually known simply as Thornycroft was a British shipbuilding firm founded by John Isaac Thornycroft in Chiswick in 1866. It moved to Woolston, Southampton, in 1908, merging in 1966 with Vosper & Company to form one organisation called Vosper Thornycroft. From 2002 to 2010 the company acquired several international and US based defence and services companies, and changed name to the VT Group. In 2010 the company was absorbed by Babcock International who retained the UK and international operations, but sold the US based operations to the American Jordan Company, who took the name VT Group. 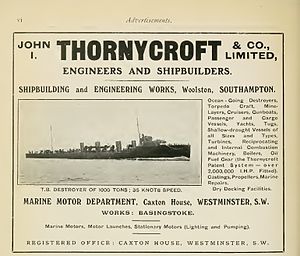 John Isaac Thornycroft had shown shipbuilding ability when aged 16 he built a small steam launch in 1859 in his father's back garden.[1] He completed a shipbuilding apprenticeship in Glasgow in 1864 and founded the Thornycroft shipbuilding company at Church Wharf, Chiswick in 1866. At Chiswick, Thornycroft built the first instance of what would become the torpedo boat, the Rap for Norway in 1873. This was followed by HMS Lightning for the Royal Navy in 1877.

In June 1904 the company relocated to Woolston, Southampton,[1] where it acquired the Mordey, Carney & Company shipyard, and in 1908 set up the Hampton Launch Works on Platts Eyot, an island on the Thames at Hampton, Middlesex. The former yard at Chiswick closed in August 1909. The first ship built by Thornycrofts for the Royal Navy at the Woolston Yard was the Tribal-class destroyer HMS Tartar.[1]

John Isaac Thornycroft died in June 1928; his role as chairman of the company had been taken by his son, John Edward Thornycroft, in 1908.

Woolston built the ferry SS Robert Coryndon for Uganda in 1930. She also survives, but as a half-submerged wreck on the shore of Lake Albert. 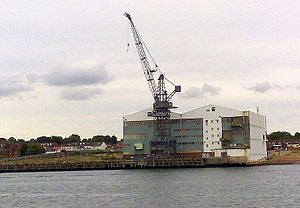 The VT Group yard at Woolston, home of Thornycrofts shipbuilding from 1906 to 2004

The first seaworthy Assault Landing Craft (ALC), later renamed LCA, Landing Craft Assault, ordered built for the British Navy were by Thornycroft. The first prototype ALC No 1 was built by J. Samuel White of Cowes to a design by Fleming Jenkin, but it was not very successful. Thornycroft's design was much closer to what the navy wanted, with its low silhouette, silenced engines and shallow draught. Designated ALC No 2, it was 41 ft 6 in long over all and driven by two Ford V8 engines of 65 bhp each. The design was slightly modified by the Admiralty and some 1,929 were built during the World War II. In 1944 sixty were being built each month. The LCA was reasonably seaworthy, so long as waves were less than 5 ft high. In heavy seas the situation could become critical and a number of LCAs converted to support craft disappeared in the choppy seas of D-Day, 6 June 1944. In 1944 267 were lost (out of 371 losses during the whole war).[7]

In 1955, the company built Scillonian, a passenger ferry built for the Isles of Scilly Steamship Company.

In 1962, John I. Thornycroft and Sons was building wooden yachts in Singapore.[8]

Thornycrofts merged in 1966 with Vosper & Company, part of the David Brown Group, to form one organisation called, by 1970, Vosper Thornycroft.[9] Later, Vosper Thornycroft changed their business name to VT Group, and in 2010 were absorbed by Babcock International,[10][11] who integrated the UK portion of VT Group into its own business, then in 2012 sold the US-based operation and the VT Group name to the Jordan Company.[12]