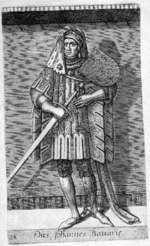 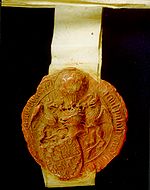 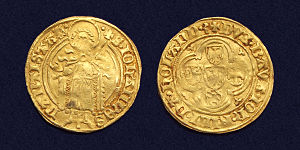 Holland, gold florin or 'Beiersgulden' with St John the Baptist, struck 1421-1422 by John of Bavaria.

John was the youngest son of Duke Albert I and Margaret of Brieg. His elder brother was William II of Bavaria, who succeeded their father as Count of Holland, Zeeland and Hainault in 1404. His sister was Margaret of Bavaria, who married in 1385 with John the Fearless, Duke of Burgundy.

As the youngest son of three, John was destined for a career in the church. At the age of 15, he became Prince-Bishop of Liège, with the support of Pope Boniface IX. John's rule was a disaster. His authoritarian style clashed with the nobles and burghers of the Prince-Bishopric. He was expelled several times and saw even a counter-bishop being elected. John turned for help to his brother and brother-in-law.

In 1408 a Burgundian army led by his brother-in-law John the Fearless went to the aid of John III against the citizens of Liège, who were in open revolt. On the field of Othée, on 12 September 1408, the men of Liège were decisively defeated, and Burgundian influence was extended over the city and over the bishopric of Liège. The ensuing executions of leading insurgents led to John's nickname "the Pitiless".

When his brother died in 1417 and was succeeded by his daughter Jacqueline as Countess of Holland and Hainaut and Duchess of Bavaria-Straubing, John the Pitiless rejected holy orders and surrendered his bishopric. In 1418, John III married Elisabeth, Duchess of Luxembourg, who was then the widow of Antoine, Duke of Brabant. No children came from this marriage.

With the aid of Sigismund, Holy Roman Emperor, who was his wife's uncle, John III immediately started a civil war against his niece Jacqueline and her husband Duke John IV of Brabant.
John the Pitiless supported the city of Dordrecht and Duke Philip the Good of Burgundy. A siege of Dordrecht in 1419 was unsuccessful, so John IV of Brabant agreed to start a joint administration with John III. Jacqueline herself as a woman, did not get a share in the political responsibility. John IV of Brabant finally gave up Holland and Hainaut and left the rule to John the Pitiless.

His niece Jacqueline went to England in 1421 and married the king's brother, Humphrey, Duke of Gloucester.[1] She was unable to retain control over Holland and Hainaut much longer after John's death. Bavaria-Straubing was divided between the dukes of Bavaria, the major portion of which went to Bavaria-Munich.

John the Pitiless was known for the rich culture of his court; Jan van Eyck was among the artists he engaged, from at least 1422 until 1424.

John the Pitiless was poisoned in 1425.