John Doukas Vatatzes, born in about 1192 in Didymoteicho, was probably the son of the general Basileios Vatatzes, Duke of Thrace, who died in 1193, and his wife, an unnamed daughter of Isaakios Angelos and cousin of the Emperors Isaac II Angelos and Alexios III Angelos.[citation needed] The Vatatzes family had first become prominent in Byzantine society during the Komnenian period and had forged early imperial connections when Theodore Vatatzes married the porphyrogennete princess Eudokia Komnene, daughter of Emperor John II Komnenos.[1]

A successful soldier from a military family, John was chosen in about 1216 by Emperor Theodore I Laskaris as the second husband for his daughter Irene Laskarina and as heir to the throne, following the death of her first husband, Andronikos Palaiologos. This arrangement excluded members of the Laskarid family from the succession, and when John III Doukas Vatatzes became emperor in mid-December 1221,[2] following Theodore I's death in November,[3][4] he had to suppress opposition to his rule. The struggle ended with the Battle of Poimanenos in 1224, in which his opponents were defeated in spite of support from the Latin Empire of Constantinople. John III's victory led to territorial concessions by the Latin Empire in 1225, followed by John's incursion into Europe, where he seized Adrianople.[5]

John III's possession of Adrianople was terminated by Theodore Komnenos Doukas of Epirus and Thessalonica, who drove the Nicaean garrison out of Adrianople and annexed much of Thrace in 1227. The elimination of Theodore by Ivan Asen II of Bulgaria in 1230 put an end to the danger posed by Thessalonica, and John III made an alliance with Bulgaria against the Latin Empire.[6] 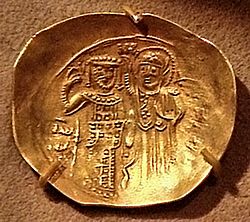 In 1235 this alliance resulted in the restoration of the Bulgarian patriarchate and the marriage between Elena of Bulgaria and Theodore II, respectively Ivan Asen II's daughter and John III's son. In that same year, the Bulgarians and Nicaeans campaigned against the Latin Empire, and in 1236 they attempted a siege of Constantinople.[6] Subsequently, Ivan Asen II adopted an ambivalent policy, effectively becoming neutral, and leaving John III to his own devices.

In spite of some reverses against the Latin Empire in 1240, John III was able to take advantage of Ivan Asen II's death in 1241 to impose his own suzerainty over Thessalonica (in 1242), and later to annex this city, as well as much of Bulgarian Thrace in 1246.[7] Immediately afterwards, John III was able to establish an effective stranglehold on Constantinople in 1247. In the last years of his reign Nicaean authority extended far to the west, where John III attempted to contain the expansion of Epirus. Michael's allies Golem of Kruja and Theodore Petraliphas defected to John III in 1252.[8][9]

John II died in Nymphaion in 1254, and was buried in the monastery of Sosandra, which he had founded, in the region of Magensia.[10]

John III Doukas Vatatzes was a successful ruler who laid the groundwork for Nicaea's recovery of Constantinople. He was successful in maintaining generally peaceful relations with his most powerful neighbors, Bulgaria and the Sultanate of Rum, and his network of diplomatic relations extended to the Holy Roman Empire and the Papacy, while his armed forces included Frankish mercenaries.

John III effected Nicaean expansion into Europe, where by the end of his reign he had annexed his former rival Thessalonica and had expanded at the expense of Bulgaria and Epirus. He also expanded Nicaean control over much of the Aegean and annexed the important island of Rhodes,[11] while he supported initiatives to free Crete from Venetian occupation aiming toward its re-unification with the Byzantine empire of Nicaea.[12]

Moreover, John III is credited with carefully developing the internal prosperity and economy of his realm, encouraging justice and charity. In spite of his epilepsy, John III had provided active leadership in both peace and war. A half-century after his death, John III was canonized as a saint, under the name John the Merciful, and is commemorated annually on November 4 in the Orthodox calendar.[13][14] Alice Gardiner remarked on the persistence of Theodore's cult among the Ionian Greeks as late as the early 20th century, and on the contrast she witnessed where "the clergy and people of Magnesia and the neighbourhood revere his memory every fourth of November. But those who ramble and play about his ruined palace seldom connect it even with his name."[15]

John III Doukas Vatatzes married first Irene Lascarina, the daughter of his predecessor Theodore I Laskaris in 1212.[16] They had one son, the future Theodore II Doukas Laskaris. Irene fell from a horse and was so badly injured that she was unable to have any more children.

Irene retired to a convent, taking the monastic name Eugenia, and died there in 1239.[17] John III married as his second wife Constance II of Hohenstaufen,[18] an illegitimate daughter of Emperor Frederick II by his mistress Bianca Lancia. They had no children.