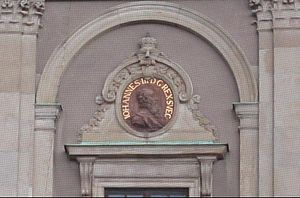 Image of King John on a wall of Stockholm Palace.

John III (Swedish: Johan III, Finnish: Juhana III) (20 December 1537 – 17 November 1592) was King of Sweden from 1568 until his death. He was the son of King Gustav I of Sweden and his second wife Margaret Leijonhufvud. He was also, quite autonomously, the ruler of Finland, as Duke John from 1556 to 1563. In 1581 he assumed also the title Grand Prince of Finland.

He was the second son of Gustav Vasa (1523–60). His mother was Margareta Leijonhufvud (1514–51), a Swedish noblewoman. As a Duke of Finland, he opposed his half-brother Eric XIV of Sweden (1560–68) and was imprisoned in 1563. After his release from prison, probably because of his brother's insanity (see Sture Murders), John again joined the opposition, deposed Eric and made himself the king. His important ally was his maternal uncle Sten Leijonhufvud, who at deathbed was made Count of Raseborg. Shortly after this John executed his brother's most trusted counsellor, Jöran Persson, whom he held largely responsible for his harsh treatment while in prison.

John further initiated peace talks with Denmark and Lübeck to end the Scandinavian Seven Years' War, but rejected the resulting Treaties of Roskilde (1568) where his envoys had accepted far-reaching Danish demands. After two more years of fighting, this war was concluded without many Swedish concessions in the Treaty of Stettin (1570). During the following years he successfully fought Russia in the Livonian War, concluded by the Treaty of Plussa in 1583, a war that meant a Swedish reconquest of Narva. As a whole his foreign policy was affected by his connection to Poland of which country his son Sigismund III Vasa was made king in 1587.

In domestic politics John showed clear Catholic sympathies, inspired by his Polish queen, a fact that created frictions to the Swedish clergy and nobility. He launched the Red Book[disambiguation needed], which reintroduced several Catholic customs. In 1575, he gave his permission for the remaining Catholic convents in Sweden to start receiving novices again. From time to time he was also at odds with his younger brother Duke Charles of Sudermannia (afterwards Charles IX of Sweden). John III was an eager patron of art and architecture.

In January 1569, John was recognized as king by the same riksdag that forced Eric XIV off the throne. But this recognition was not without influence from John; Duke Karl received confirmation on his dukedom without the restrictions of his power that the Arboga articles imposed. The nobilities' power and rights were extended and their responsibilities lessened.

John was still concerned about his position as king as long as Eric was alive. The fear of a possible liberation of the locked up king worried him to the point that in 1571 he ordered the guards to, in any suspicion of liberation attempt, murder the captured king. It is possible this is how his life ended in 1577.

John III was reported[citation needed] like his father in propaganda, with repeated claims to have "liberated Sweden" from the "bloodhound" Christian II, as well as rescuing the population from the "tyrant" Eric XIV; also violent, hot tempered and greatly suspicious.

John married his first wife, Catherine Jagellonica of Poland (1526–83), house of Jagiello, in Vilnius on 4 October 1562. In Sweden, she is known as Katarina Jagellonica. She was the sister of king Sigismund II Augustus of Poland. Their children were:

Together with his mistress Karin Hansdotter (1532–96) he had at least four illegitimate children:

John cared for Karin and their children even after he married Catherine Jagellonica, in 1562. He got Karin a husband that would care for her and the children: in 1561, she married the nobleman Klas Andersson (Västgöte), a friend and servant of John. They had a daughter named Brita. He continued supporting Karin and his illegitimate children as a king, from 1568. In 1572 Karin married again, as her first husband was murdered by Erik XIV in 1563, to a Lars Henrikson, whom John ennobled in 1576 to care for his issue with Karin. The same year, he made his daughter Sofia a lady in the castle, as a servant to his sister Princess Elisabet. In 1580, John married her to Pontus de la Gardie. She later died giving birth to Jacob De la Gardie.