He is known for re-establishing the power of the Portuguese throne, reinvigorating its economy, and renewing its exploration of Africa and the Orient.

Born in Lisbon, the son of King Afonso V of Portugal by his wife, Isabella of Coimbra, infanta of Portugal, John II succeeded his father in 1477 when the king retired to a monastery, but only became king in 1481, after the death of his father and predecessor.

As a prince, John II accompanied his father in the campaigns in northern Africa and was made a knight after the victory in the Conquest of Arzila in 1471. In 1473, he married Leonor of Viseu, Infanta of Portugal and his first cousin.

Even at a young age, John was not popular among the peers of the kingdom since he was immune to external influence and appeared to despise intrigue. The nobles (including particularly Ferdinand II, the Duke of Braganza) were afraid of his future policies as king. 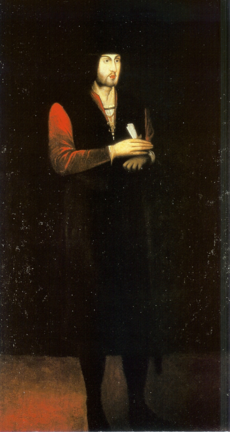 After his official accession to the throne in 1481, John II took a series of measures to curtail the overgrown power of his aristocracy and to concentrate power in himself. He deprived them of their right to administer justice on their estates.[2] Immediately, the nobles started to conspire. Letters of complaint and pleas to intervene were exchanged between the Duke of Braganza and Queen Isabella I of Castile.

King João took the precaution of renegotiating the "Tercerias de Moura" agreement to insure that his son, Alfonso, was living safely back at court, before moving against Braganza, the most powerful noble in the realm.[3] In 1483, additional correspondence was intercepted by royal spies. The House of Braganza was outlawed, their lands confiscated and the duke executed in Évora. His widow, Joao's sister-in-law, fled with her children to Castile.[4]

In the following year, the Duke of Viseu, John's cousin and brother-in-law, was summoned to the palace and stabbed to death by the king himself for suspicion of a new conspiracy. Many other people were executed, murdered, or exiled to Castile including the Bishop of Évora who was poisoned in prison.[2] Following the crackdown, no one in the country dared to defy the king and João saw no further conspiracies during his reign. A great confiscation of estates followed and enriched the Crown, which now became the one power of the realm.

Facing a bankrupt kingdom, John II showed the initiative to solve the situation by creating a regime in which the Council of Scholars took a vital role.[4] The king then conducted a search of the population and selected members of the Council according to their abilities, talents and credentials. Popular complaints on judicial acts normally had the sympathy of the king. João's exploration policies (see below) also paid great dividends. Even before the Tordesilhas Treaty, such was the profit coming from John II's investments in the overseas explorations and expansion that the Portuguese currency had become the soundest in Europe. The kingdom could finally collect taxes for its own use rather than to pay debts, mainly thanks to its main gold source at that time, the coast of Guinea. 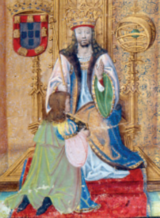 John II famously restored the policies of Atlantic exploration, reviving the work of his great-uncle, Henry the Navigator. The Portuguese explorations were his main priority in government, pushing south the known coast of Africa with the purpose of discovering the maritime route to India and breaking into the spice trade. During his reign, the following achievements were realized:

The true extent of Portuguese explorations has been the subject of academic debate. According to one theory some navigations were kept secret for fear of competition by neighbouring Castile. The archives of this period were destroyed in the fire after the 1755 Lisbon earthquake, and what was not destroyed during the earthquake was either stolen or destroyed during the Peninsular War or otherwise lost.[6][7][8] 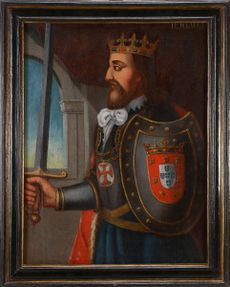 When Columbus returned from his voyage he thought of first stopping in Lisbon to claim his victory in front of King John II. King John II's only response to this was that under the Treaty of Alcáçovas previously signed with Spain, Columbus's discoveries lay within Portugal's sphere of influence. Before Columbus even reached Isabella I of Castile, John II had already sent a letter to them threatening to send a fleet to claim it for Portugal. Spain quickly hastened to the negotiating table which took place in a small town named Tordesillas. There was also a papal representative during that occasion in order to act as mediator. The result of this would be the famous Treaty of Tordesillas.

But the division of the world was not the main issue between the Iberian kingdoms. Isabella I of Castile and Ferdinand II of Aragon had several daughters, but only one feeble male heir—Juan. The oldest daughter, Isabella of Aragon, had been married to Afonso, Prince of Portugal, since childhood. Afonso was John II's only son and beloved by the king. If Ferdinand died without male heir, as was probable, Afonso would be heir not only to the throne of Portugal, but also to those of Castile and Aragon. This threat to Castilian and Aragonese independence was very real, and the Catholic Monarchs tried every diplomatic trick to dissolve the wedding. Finally, in 1491, Afonso died in mysterious circumstances—a fall from a horse during a ride in the margin of the Tagus river. The influence of Isabella and Ferdinand in this accident was never proved, but the prince was an excellent rider, his Castilian valet fled never to be seen again, and after this, Isabella, the heiress, was no longer married to Castile's enemy. John tried without success until the end of his life to legitimise Jorge, Duke of Coimbra, his illegitimate son.

John II died at Alvor aged 40 and without legitimate children. He was succeeded by his first cousin Manuel I.

The nickname the Perfect Prince is a late description and refers to Niccolò Machiavelli's work The Prince. John II is considered to have lived his life exactly according to the writer's idea of a perfect prince. Nevertheless, he was admired as one of the greatest European monarchs of his time. Isabella I of Castile usually referred to him as El Hombre (The Man).[9]

The Italian scholar Poliziano wrote a letter to John II, paying him a profound homage:

to render you thanks on behalf of all who belong to this century, which now favours of your quasi-divine merits, now boldly competing with ancient centuries and all Antiquity.

and considering his achievements to be of merit above Alexander the Great or Julius Caesar. He offered himself to write an epic work giving an account of John II accomplishments in navigation and conquests. The king replied in a positive manner, in a letter of October 23, 1491, but delayed the commission. [10]