John IV (Portuguese: João IV de Portugal,[1] pronounced: [ʒuˈɐ̃w̃]; 19 March 1604 – 6 November 1656) was the King of Portugal and the Algarves from 1640 to his death. He was the grandson of Catherine, Duchess of Braganza,[2] who had in 1580 claimed the Portuguese crown and sparked the struggle for the throne of Portugal. John IV was nicknamed John the Restorer (João o Restaurador). On the eve of his death in 1656, the Portuguese Empire reached its zenith, spanning the globe.[3] He was one of the main forces behind the independence of Portugal after the Spanish dominance.

John was born at Vila Viçosa and succeeded his father Teodosio II as Duke of Braganza[4] when the latter died insane in 1630. He married Luisa de Guzman (1613–66), eldest daughter of Juan Manuel Pérez de Guzmán, 8th Duke of Medina Sidonia, in 1633. 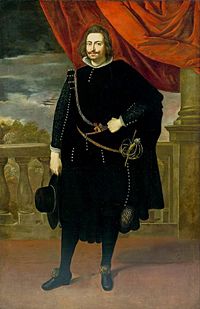 John had blond hair, blue eyes and an average height.[5] 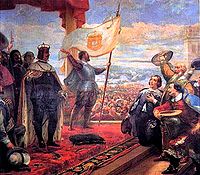 The Acclamation of the King John IV.

He was raised to the throne of Portugal (of which he was held to be the legitimate heir) during the revolution on 1 December 1640, against King Philip III.[6]

His accession led to a protracted war (the Portuguese Restoration War) with Spain, which only ended with the recognition of Portuguese independence in a subsequent reign (1668). Portugal signed lengthy alliances with France (1 June 1641) and Sweden (August 1641) but by necessity its only contributions in the Thirty Years' War were in the field against Spain and against Dutch encroachments on the Portuguese colonies.

In Spain, a Portuguese invasion force defeated the Spanish at Montijo, near Badajoz, in 1644.

Abroad, the Dutch took Portuguese Malacca (Jan 1641) and the Sultan of Oman captured Muscat (1650). Nevertheless the Portuguese, despite having to divide their forces among Europe, Brazil and Africa, managed to retake Luanda, in Portuguese Angola, from the Dutch in 1648 and, by 1654, had recovered northern Brazil, which effectively ceased to be a Dutch colony. This was countered by the loss of Portuguese Ceylon (present day Sri Lanka) to the Dutch who took Colombo in 1656.

King John IV died in 1656 and was succeeded by his son Afonso VI. His daughter, Catherine of Braganza, married King Charles II of England.[2]

John was a patron of music and the arts, and a considerably sophisticated writer on music; in addition to this, he was a composer. During his reign he collected one of the largest libraries in the world, but it was destroyed in the Lisbon earthquake of 1755. Among his writings is a defense of Palestrina, and a Defense of Modern Music (Lisbon, 1649). One famous composition attributed to him is a setting of the Crux fidelis, a work that remains highly popular during Lent amongst church choirs.[7] However, no known manuscript of the work exists, and it was first published only in 1869, in France. On stylistic grounds, it is generally recognized that the work was written in the 19th century.[8]

John married Luisa de Guzmán,[9] daughter of Juan Manuel Pérez de Guzman, 8th Duke of Medina-Sidonia. From that marriage several children were born. Because some of John's children were born and died before their father became king they are not considered infantes or infantas (heirs to the throne) of Portugal.