John I of France

John reigned for five days under the regency of his uncle Philip the Tall, until his death on 20 November 1316. The infant King was buried in Saint Denis Basilica. He was succeeded by Philip, whose contested legitimacy led to the re-affirmation of the Salic law, which excluded women from the line of succession to the French throne. 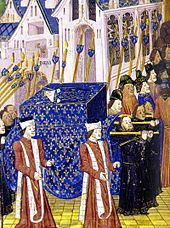 Funerary convoy of John I.

The child mortality rate was very high in medieval Europe and John may have died from any number of causes, but rumours of poisoning spread immediately after his death, as many people benefited from it and as John's father died himself in strange circumstances. The cause of his death is still not known today.[2]

The premature death of John brought the first issue of succession of the Capetian dynasty. When Louis the Headstrong, his father, died without a son to succeed him, it was the first time since Hugh Capet that the succession from father to son of the kings of France was interrupted. It was then decided to wait until his pregnant widow, Clementia of Hungary, delivered the child. The king's brother, Philip the Tall, was in charge of the regency of the kingdom against his uncle Charles of Valois. The birth of a male child was expected to give France its king. The problem of succession remained when the infant that was proclaimed King of France, under the name of John I, died five days after birth. It was his uncle who ascended the throne at the expense of his four-year-old half-sister, Joan, daughter of Louis X and Margaret of Burgundy.

Various legends circulated about this royal child. First, it was claimed that his uncle Philip the Tall had him poisoned. Then a strange story a few decades later came to start the rumor that the little King John was not dead. During the captivity of John the Good (1356-1360), a man named Giannino Baglioni claimed to be John I and thus the heir to the throne. He tried to assert his rights, but was captured in Provence and died in captivity in 1363.[3]

In The Man Who Believed He Was King of France, Tommaso di Carpegna Falconieri suggests that Cola di Rienzo manufactured false evidence that Baglioni was John the Posthumous in order to strengthen his own power in Rome by placing Baglioni on the French throne. Shortly after they met in 1354, di Rienzo was assassinated, and Baglioni waited two years to report his claims. He went to the Hungarian court where Louis I of Hungary, nephew of Clemence of Hungary, recognized him as the son of Louis and Clemence. In 1360, Baglioni went to Avignon, but Pope Innocent VI refused to receive him. After several attempts to gain recognition, he was arrested and imprisoned in Naples, where he died in 1363.[3]

Maurice Druon's historical novel series Les Rois maudits dramatises this theory. In La Loi des mâles (1957), the infant John is temporarily switched with the child of Guccio Baglioni and Marie de Cressay as a decoy. He is subsequently poisoned by Mahaut, Countess of Artois, in order to place John's uncle (and Mahaut's son-in-law), Philippe, Count of Poitiers, on the throne. Marie is coerced into secretly raising John as her own son, named Giannino Baglioni. An adult Giannino was portrayed by Jean-Gérard Sandoz in the 1972 French miniseries adaptation of the series, and by Lorans Stoica in the 2005 adaptation.